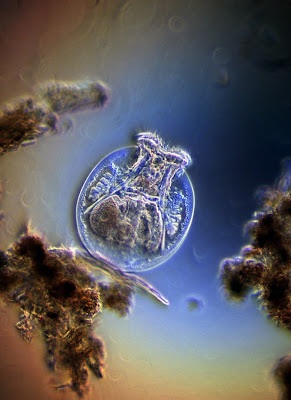 I had a hard time deciding which chapter to excerpt second. They're all so good. As I look around at the madness that keeps popping up in the news (see this excellent op-ed on Tiger Woods over at ESPN), I thought Jeremy's chapter might prove helpful. What can artists be doing in a broken world like ours? They can join the Holy Spirit's work in "Exposing the Depths." This is Jeremy's fourth point out of six.

By the way: my last post was #200 as a Blogspot Blogger. This past November I celebrated my fifth year blogging. What a deal.

And check this out: you can already pre-order the book on Amazon!

At the center of John’s vision stands the victorious Lamb (Rev. 21:22; 22:3). But earlier he has told us that this Lamb bears the marks of slaughter (5:6). This should stand as a subversive warning against all sentimentality: when we misrepresent reality by evading or trivializing evil, usually for the sake of indulging pleasing emotions. Our refusal to face evil for what it is takes many forms, but is perhaps most pointed in Western society’s common denial of death. We grab at the things of this world because we cannot bear the thought that they will dissolve into dust like everything else.

We dupe ourselves into thinking there will always be enough to meet our wants—enough fuel, enough energy, enough land—because we cannot imagine an end to all our acquiring, the possibility that there are limits, that things and people are not everlasting. Provocatively, theologian Stanley Hauerwas contends, “There’s a connection between the amount of money [we] spend on medicine and our reaction to 9/11. Both are attempts to deny that we’re not going to get out of life alive.”

Many believe we have reached an “aesthetic moment” in our culture, when artistic media are quickly assuming massive importance in shaping the Western imagination. If there is truth in this, it is vital that Christian artists do not succumb to the sentimentality that so often accompanies surges of aesthetic enthusiasm. William James once wrote about a visit to a Christian resort in New York State. He tells us of “the atrocious harmlessness of all things” and how he longed for the outside world, with its “heights and depths, the precipices and steep ideals, the gleams of the awful and the infinite.”

It is probably in our worship that this sentimental “flattening out” is most evident. We see it in our tendency to avoid any art in worship that will not instantly push the “feel-good” button, lest we lose members or repel newcomers. We see it when we insist God should grant everything in an instant, matched by music where every tension is immediately resolved, no dissonance “lived through.” We see it when we crave for direct, unmediated access to God, forgetting that God is always to some extent mediated through the finite materials of the created world. We see it in what Rowan Williams calls the “sentimental solipsism” of some recent songwriting, where the erotic metaphors of medieval and Counter-Reformation piety reappear but without the theological checks and balances of those older traditions. As a result, “Jesus as object of loving devotion can slip into Jesus as fantasy partner in a dream of emotional fulfillment.”

Of course, great swathes of art, especially of the twentieth century, have waged war against sentimentality—from the Expressionists to Francis Bacon. But we should be wary of presuming too quickly that this will provide the exposure of evil to which the gospel is then presumed to provide the “answer.” For in our own power, we can never uncover our true condition. This is the Spirit’s work, and he does so above all by returning us repeatedly to Golgotha. Here, climactically and paradigmatically, the Spirit “sounds the depths,” and the depths are deeper than any of us could have imagined. Here all pretense is stripped away; here we are all unmasked as enemies of God, murderers of his own only Son. Out of the depths, out of the fathomless abyss to which we have sent him, Christ howls, “My God, my God.”

Of course, there is a double exposure here. For the exposure of our true condition is at the same time the exposure of the extent and extremity of God’s own love, the sheer strength of divine passion, which precedes and outruns all human sin. For the one who cries from the pit is none other than God himself in solidarity with the lowest of the low; the eternal Son of God dredging the nadir of his creation with patient love; the faithful Son reaching into the pit of darkness we have made for ourselves in order to open it up to his Father’s eternal embrace. Here indeed we witness the “the gleams of the awful and the infinite”: the awfulness of our plight and the ardor of a far greater infinite love.

To the common objection, “This is to marginalize the resurrection,” we must surely respond that in the New Testament, Easter does not cancel the crucifixion but vindicates it, confirms it as the place where evil has been grasped and defeated, the place where sin is taken to the grave, the place where we are both exposed and forgiven.

Fortunately, many contemporary Christian artists in recent years have found themselves tugging against the strong currents of sentimentality evident in our society: songwriters such as Matt Redman in England; John Bell of the Iona Community; visual artists such as Bruce Herman, Tim High and Anneke Kaai; the Hungarian playwright Andras Visky. Perhaps rather more “on the edge” are characters such as Sinead O’Connor, the Grammy Award-winning Irish singer and songwriter, whose latest album (entitled “Theology”) is dedicated to a professor in thanks for his classes on Jeremiah. Especially prominent in Great Britain is the music of the Roman Catholic composer James MacMillan, who embodies perhaps more than any other living musician the counter-sentimentality I am attempting to describe here.

My vision for the arts and the church in the next fifty years? Artists and pastors together exploring what it means to allow the Spirit to “expose the depths.”

Alan said…
What a great excerpt!

We caught some Dr. Begbie speaking her in KY at Asbury about a month ago, and it was this point in his lecture, "piercing exposure" is what I got down in my notes, that really fired me up.

Thanks for sharing looking forward to the book.

Merry Christmas to you and Phaedra!

w. david o. taylor said…
Alan, thanks for the kind words. A happy Christmas to you as well.
7:28 PM