Bonhoeffer on Christmas and a Wild Idea 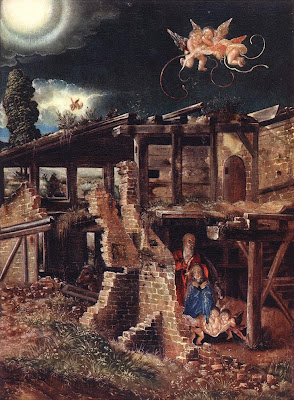 The text at the end of this entry is an excerpt from a sermon which Dietrich Bonhoeffer gave in 1933. It was the third Sunday in Advent. His passage was Luke 1:46-55.

The artwork above is by Albrecht Altdorfer, titled "Birth of Christ." It was this particular work that prompted Bonhoeffer to write a letter to his parents on the first Sunday of Advent, in 1943. Writing from Tegel Prison in Berlin, he wondered at the artist's compositional decision. He found it curious that Altdorfer, who lived from 1480 to 1538, against all tradition, had chosen to place the Holy Family in the middle of a dilapidated house. Perhaps the artist meant to say, Bonhoeffer mused, that "Christmas can, and should, be celebrated in this way too."

A few observations. One, there is something wistful about the fact that this great 20th-century theologian was writing his mom and dad. How often do we think, "Hey, Bonhoeffer's got a ma and pa"? Yet there they were, playing their parental role to the end. Two, his insights are made all the more poignant because his death lay four months away. And three, with regard to his sermon of 1933, he exposes the profound misunderstanding of the Incarnation which a certain Anglican church in Auckland, New Zealand, prominently displays on its website, and he brings to light the rash and nonsensical, and, I add, ultimately hopeless, thinking of its rector. The classical view of the Incarnation is 'ridiculous'? Yes, it is ridiculous. Preposterous? I hope so. Implausible? Not necessarily, and certainly not on the logic that an outrageous claim cannot be true. Surely it's not that simple. 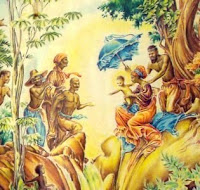 poor and the rich. I say hail to the God of our worst enemy, no less than ourselves, and to the God who looks with compassion again and again on all our weak, tired selves. I say hail to the God who, when we've come this close to figuring out the manger and the cross, beaten into cliche by the rite of annual pageants, leaving us un-disturbed, un-fluttered by mystery, entertained, bored, worn out and wandering through the world with thin imaginations, incapable of resisting the powerful, alternate imaginations of our culture, still manages to surprise us with un-bidden grace, confronting our presumption and yet offering us a taste, yet again, of the Life that is truly life. Thank God for Jesus Christ, Deum de Deo, Lumen de Lumine.

And I say bah humbug to the dumbing down of Christmas. It irritates me how quickly our culture, out in the world and in the church too, exchanges peace on earth for stress on earth. Is it really the most wonderful time of the year? I drive around town and find that it's one of the most tiring times of the year. Tired, haggard, distracting, frazzled, burdened with the anxiety of expectations that may never be met. And then there's the ubiquitous pottagy mush of Christmas music. It's about as silly as this dance by Stephen Colbert (courtesy of Travis & Leslie Hines):

Does your average civic religionist know the vicious origin of the carol "We Wish You a Merry Christmas"? Probably not. Or the concrete history behind any carol, save "Silent Night"? Unlikely. How can they when, by dint of repetition, carols are flattened into innocuousness.

But here is my wild idea.

Can you imagine if Christians in North American decided one year 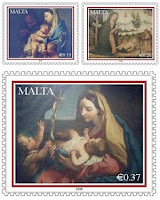 not to buy any gifts? Let's estimate a conservative number. Say 100 million Christians in the US and Canada did everything else associated with the season but we cut out purchasing gifts. Not a single one. Instead of buying and receiving presents we spent our time, money and energy being together. We served those with less. We shared simple meals, or even extravagant ones. We did things which invigorated our physical bodies. We entertained each other with not a single electronic device, but only whatever instruments or talents were to be had in the room, even if it meant telling really bad jokes all night long. We relished silence. We prayed for the persecuted church around the world. We asked the Holy Spirit to help us attend to the Incarnation; awaken our imaginations with deepened understanding; and give us the grace, for one moment, to experience the freedom from false wants that play havoc on our hearts.

Can you imagine how much time we'd have on our hands if we cut from our schedules running to the stores and surfing the internet for gifts?

Forget "one gift less" efforts? (Although I love what the guys behind "Advent Conspiracy" are on about.) Let's try no gifts. Just one year. Our economy might buckle, sure. And the church would need to be ready to help folks who would suffer. But just think of the new ways that creative energy might be unleashed. Just think how we might arrive at January 1 feeling, well, refreshed. 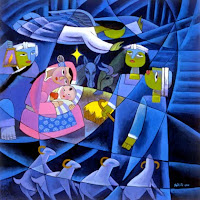 "If God chooses Mary as his instrument, if God himself wants to come into this world in the manger at Bethlehem, that is no idyllic family affair, but the beginning of a complete turnaround, a reordering of everything on this earth. If we wish to take part in this Advent and Christmas event, then we cannot simply be bystanders or onlookers, as if we were at the theater, enjoying all the cheerful images.

No, we ourselves are swept up into the action there, into this conversion of all things. We have to play our part too on this stage, for the spectator is already an actor. We cannot withdraw.

What part, then, do we play? Pious shepherds, on bended knee? Kings who come bearing gifts? What sort of play is this, where Mary becomes the mother of God? Where God enters the world in the lowliness of the manger? The judgment of the world and its redemption--that is taking place here.

And the Christ child in the manger is himself the one who pronounces the judgment and the redemption of the world. He repels the great and the powerful. He puts down the mighty from their thrones, he humbles the arrogant, his arm overpowers all the proud and the strong, he raises what is lowly and makes it great and splendid in his compassion.

Therefore we cannot approach his manger as if it were the cradle of any other child. Those who wish to come to his manger find that something is happening within them." 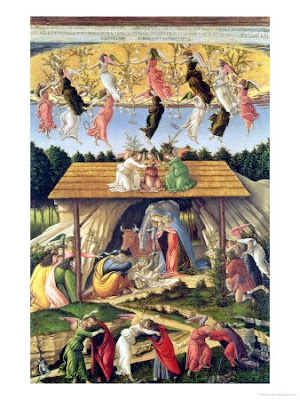 w. david o. taylor said…
I did think of the administrative nightmare to try to pull it off in any kind of coordinated way. But then I thought--what if I simply proposed this to my family. We could, if the kids were too distressed, do a few simple gifts on St. Nicholas Day (Dec. 6) or on Epiphany (Jan 6). But for the mid-section of December we worried not a bit about gifts and allowed the manic society to float right on by.

In writing this entry I kept checking myself to see if I was simply being crotchety. I can get cranky about holidays in this country pretty easily. But as best as I can tell, I don't think I am. I know I'm tired; and some of that is my own doing. We don't own a TV. We don't shop much. We listen mostly to the classical station on the radio (or hip-hop and R&B). But I get so worn down by the din of noise and activity all around our city, and I do worry that the incessant playing of Christmas carols and pseudo-carols plus the busyness to which Americans are naturally prone, in their cumulative effect, desiccate Christmas of the theological reality of the Incarnation, of the terror and awe which it entails.

Is there any time of the year in which our society ceases all but the most essential, utilitarian activity and decides to be quiet?

I should quit typing. It's Christmas Eve and I'm writing a comment in my blog. It's pathetic. I'm going to drink some eggnog and think about what I've just done. Farewell till the 26th. I promise not to check this blog on the 25th.
6:56 PM

Essentially Heather said…
You crack me up. So much of what you write gives me pause for pondering and I love that you continued your musing in the comments section.
My husband and I have stated (again, as in years past) that next year we will do something different. We will change things so that we are not running here and there and everywhere so much that we aren't able to truly immerse ourselves into a rhythm that allows us to enter into the quiet and rediscover the joy and expectation of Advent.
This time, I think we really mean it. The past couple of years, we've really whittled down the gift giving. We/I make most of the gifts we do give(although that in itself can be stressfull), so the buying-stress has been greatly reduced. I have yet to get a handle on the frenzy of activity over the week of Christmas that seems to deplete instead of refresh our hearts.
Ah, well, here's to a year of working it out, hopefully, so that next December 27th I am not sitting here wondering how I'm going to dig out after all the flurry has settled.
10:41 PM

w. david o. taylor said…
SoS 1:4: Thanks for your comment. Quick question: what's your name? I know what SoS 1:4 refers to, but I'm afraid I haven't figured out what your name is. :)

Yes, next year we'll give it another try. I do wonder if our success in living a more peaceful, spacious Advent is connected to a community of people who join us in the venture. I find that activities I attempt to mount on my own usually peter out. We'll see.

Blessings on your own ventures. I admire any woman who gives it a try with six children and a husband in tow.
11:53 AM

Essentially Heather said…
I'm sorry, David. My name is Heather (Meg's niece). I was messing around w/ my blog layout a while back. Things weren't appearing on the page like I wanted, so I ended up ditching my name for something shorter and ended up w/ the tag SoS 1:4. You didn't ask for that story, but there it is:-)
3:44 PM