The Sayings of Eugene Peterson (on the psalms) 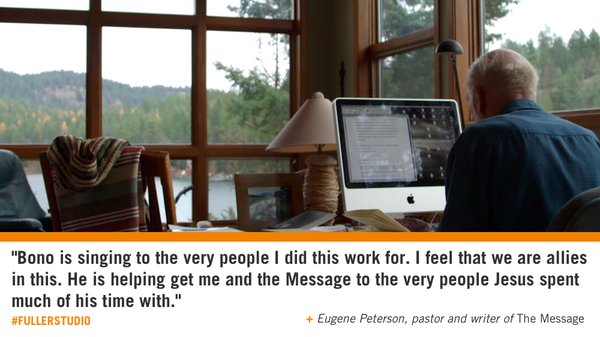 Having included a list of "sayings" from Bono on the psalms and on his relationship to Eugene Peterson, it seemed only fair to provide the converse. The following comments represent some of the things that Eugene has said about Bono and U2 over the years, in most cases before ever meeting them in person. As with Bono's comments, these are taken from a variety of places, including Eugene's book on the psalms, Answering God, and interviews he's given over the years, chiefly with the U2 fan site, www.atu2.com.

You can watch here the short documentary that I was privileged to produce, in conjunction with my role as director of Brehm Texas, an initiative of Fuller Seminary's Brehm Center for Worship, Theology and the Arts, and which was directed by Nathan Clarke of Fourth Film Films.


THE SAYINGS OF EUGENE PETERSON ON THE PSALMS

“I heard my first Bono song in Munich.” (This is a date I have yet to track down.)

2.    Question: What did you think about having a quote from your work recited, uncredited, in front of 20,000 concertgoers at a time?

"My reaction? Pleased, very pleased. Bono is singing to the very people I did this work for. I feel that we are allies in this. He is helping get me and The Message into the company of the very people Jesus spent much of his time with."

Question: When your friends describe their U2 concert experiences to you, a declared non-fan, how do they try to get it across?

3.    “If I'm just around people who talk the way I do, I lose perceptive accuracy, sharpness. And I think Bono is doing that for many.”

Eugene adds this word of appreciation to U2: "Thank you for preaching to all the people who will never listen to me or read anything that I write! And for doing it with such integrity." I think that's what I feel, I just feel grateful to them for being obedient to the gifts that God has given them.”

4.     “I think the non-church crowd, through Bono's music, find things which they had either idealized or dismissed as unwelcome intrusions now raised to a new level in which they can be perceived as included in the operations of (what I would call) salvation: grace, peace, etc.”

5.     “So, when somebody like Bono responds and a lot of other people like him—I get a lot of letters from prison—I think, "O, thank you Lord, this is where I wanted it to get read and listened to." And when Bono read it to his father I felt very honored to be in on that.”

6.     “There's something very refreshing about U2. It's honest music. There's an honesty and that's why I think the word prophetic is accurate for them. They are not saying things that people want to hear to make them escape from their ordinary lives. They push us back into the conditions in which we have to live.”

7.     “Poets tell us what our eyes, blurred with too much gawking, and our ears, dulled with too much chatter, miss around and within us. Poets use words to drag us into the depth of reality itself. Poetry grabs us by the jugular. Far from being cosmetic language, it is intenstinal.”

8.     To enter into a world of prayer and worship, Eugene writes, is not easy. “We are used to anxieties, egos, and problems; we are not used to wonder, God and mystery.”

9.   “The primary use of prayer, according to the psalms, is not for expressing ourselves, but in becoming ourselves, and we cannot do that alone.”

10.  “The work of the psalms is to provide access to largeness, and thereby to rehabilitate the intimated imagination so that it can grasp the enormous range of the word of God.”

12.  “Metaphor uses the language of sense experience to lead us into the world of the unseen: faith, guilt, mind, God…. So, when the psalmists pray, they call up lions and snares and dirt to talk about sin, sun and shade and king to address God, tree and mountain and lamb to designate lives blessed by God. There is not a single psalm without its metaphor or metaphors.”

13.  “The Psalms are part of something before they are anything—part of Genesis, Joshua, and Esther; part of Matthew, Romans, and the Apocalypse. Since the Psalms are not themselves by themselves, they cannot be prayed in isolation from their context, those sixty-five other ‘creatures’ that God uses to shape salvation in us.”

14.  “The Psalms…are infused with and surrounded by a genetic, cultural, worshiping, and believing heritage. This canonical condition means that in the life of faith we don’t make up original prayers that suit our private spiritual genius. Prayer is not an original language, but a received language.”

15.  “The psalm titles tug at our attention, saying ‘Remember, this is a story you are in. By praying you do not get out of the difficult work of sin and enemy and family, you get further into it. Instead of finding it easier, you will find it more demanding.” 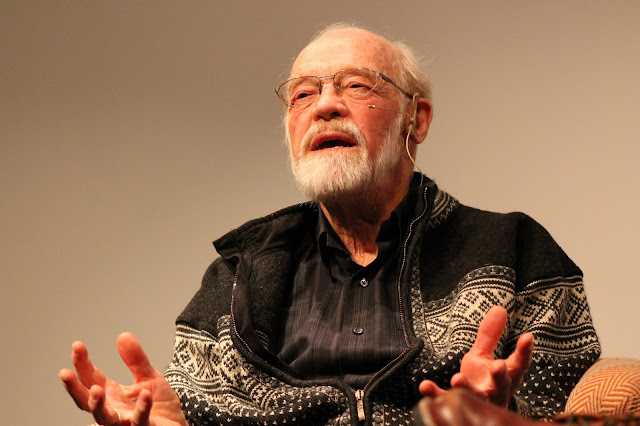 Angela said…
Hi David! Since the website @U2 has left us, Scott Calhoun and I have moved our Eugene Peterson content over to The U2 Conference's site. Would it be possible to update your link? There's a dedicated Peterson section (with a link to your films!) here: https://u2conference.com/u2-studies/ Thanks!
9:20 AM