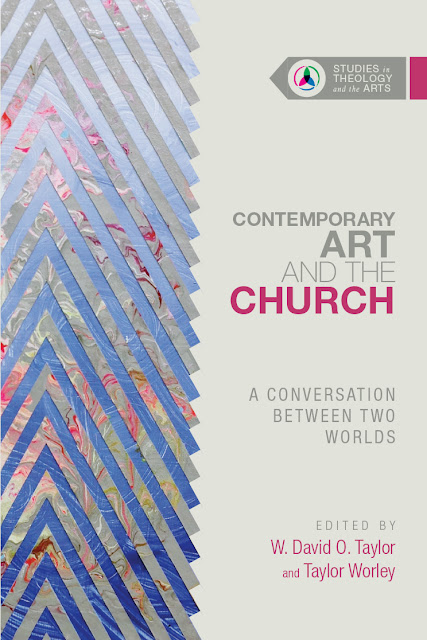 I served as co-editor with Taylor Worley of a multi-author book that is the first of its kind: Contemporary Art and the Church: A Conversation Between Two Worlds (IVP Academic: 2017). 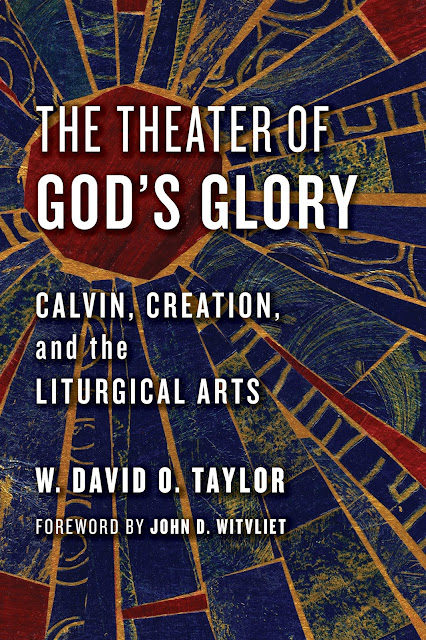 In the above book, The Theater of God's Glory: Calvin, Creation and the Liturgical Arts (Eerdmans: 2017), I explore John Calvin's theology of the physical world with an eye to the context of art in the corporate worship of the church. 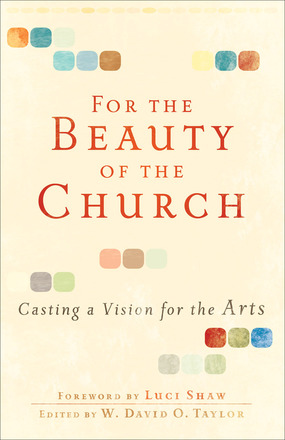 In many churches today, in contrast, the arts are an afterthought at best and forbidden at worst. In this book, For the Beauty of the Church: Casting a Vision for the Arts (Baker Books: 2010), eight authors propose a vision that takes us beyond "how we've always done it," beyond fads, beyond mere imitation of the surrounding culture, beyond utilitarianism that tempts us at every turn to develop a robust, dynamic and substantive vision for the place of the arts--and artists--in our churches.

What's its specific aim? Its specific aim is to show how the many parts of the landscape of church and art hold together--from worship to mission, discipleship to community and to the service of our neighbors. You can think of it as a kind of helicopter flyover, but one with expert pilots.

What authors does it include? The guides include Eugene Peterson, Lauren Winner, Jeremy Begbie, Andy Crouch, Barbara Nicolosi, Joshua Banner, John Witvliet and myself. Our common hope is to inspire readers of all sorts and to empower church and ministry leaders with a vision of the church and the arts that would promote a far-seeing, long-lasting, fruit-bearing tradition of artmaking by the church, for the church, for the glory of God in the church, and for the good of the cities and towns in which we live and which God so loves.

See here for other things, both good and bad, that people are saying about the book.

Who are the artists whose work accompanies each chapter?

Here they are, in the order in which they appear in the book. If you click on their name, you'll be taken to their personal website. 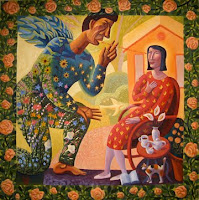 I chose Jim's annunciation piece because it nicely captured the feel of my introductory chapter. I've known Jim for a while, enjoying both his Fourth of July parties and his good sense of humor. I've especially loved the vibrant, pungent quality of his subject matter in the artwork which he has produced over the years. That quality became something the congregation at Hope Chapel tasted one season of Easter, and still to this day. We had commissioned Jim to make a wall banner for the back of the sanctuary. With a generous zeal, Jim created a massively large banner depicting the resurrected Christ hovering over the landscape of Jim's childhood neighborhood. The irradiating Christ made (and indeed still makes) all things new: barbecue grills, stars, guitars, trees, swing sets, wine, etc. The work is at one and the same time terrifying and playful. Jim attends Sacred Heart Catholic Church in Elgin, TX.

Katherine was an invaluable ally when I first arrived at Hope Chapel. In the summer of 1996 I gathered artists into a room for my first time. I remember Katherine sitting in the right corner of the room. She introduced herself as a printmaker and curator. Without her, quite honestly, I would not have known a thing about the successful organization of a visual art exhibit. She's a master printer who also creates gorgeous prints. She's a delightful, elegant woman, excellently connected to the art scene in Austin, and she helps lead CIVA's printmaking efforts. Katherine attends Hope Chapel. 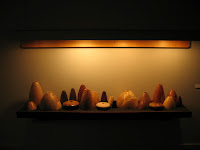 Andy, aka "Ebbesen," is a latter-day Leonardo da Vinci. It would be cute of me to say this if I were exaggerating. But I am not. He's one of those people who can work in any media: metal, stone, wood, clay, wax, glass, fiber, canvas, electrical, photographic, and so on (and I mean the "so on" literally). He's like a one-man Mister Magorium, with an astonishing ability to create work that is as magical as it is thought-provoking. The photograph at left captures much better than the B&W version in the book the warmth of the woods which he worked into this "chorus." Andy attends Christ Church Anglican in Austin.

Baker's work is sly and you could easily be deceived if you walked by it too quickly. You'd think it was only cartoons. While it resembles the cartoon craft, it operates in the tradition of satire. But Baker's satire lacks the petty, mean-spirited and ultimately selfish quality that marks so much that goes by satire these days. Baker's work is--dare I say it?--sincere. And that's what makes his work truly powerful. I had a chance last summer to hang out with him and his Orthodox artist friends, and I am so grateful for our friendship within the shared space of a Great Tradition Christian faith. Baker attends St. John the Forerunner Orthodox Church in Austin. 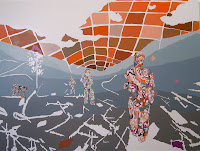 I met Laura in the summer of 1991. I've known her the longest of any artist in Austin. I so earnestly wanted her to succeed as an artist that I joined a few others in supporting her financially through her MFA. At the end of her program Hope Chapel hosted a solo exhibit of her work. One of the things I loved most about her work, especially in the context of Hope, was how it re-taught us how to see. Her subject matter included Dalits and refugees, the least of these, to use Jesus' language. These were the ones, left to our own devices, that we might not "see." Her abstract and conceptual style forced our congregation to slow down and look, and look again, and look yet again. This kind of careful looking became not simply an artistic experience, it became a spiritual discipline, and for that service to the church I am deeply grateful. She worships at St. Mark's Episcopal in Austin. 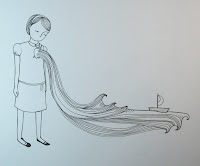 Samantha's work tends to make me simultaneously very, very melancholy and very, very happy. She creates these poignant figures that capture so much in such little space. I met Samantha while she was a college student at UT Austin. Her German background endeared her to me, since I'd studied in an Austrian school as a kid. She frequently humored my crude attempts at carrying a conversation in the mother tongue of Luther and Goethe. But her work is some of my all-time favorite. Additionally, she did this sketch-an-artpiece-at-least-once-a-day for, well, was it thirty days or fifty days or one hundred days? I can't remember. All I remember is that it inspired me to launch my own thirty-day writing challenge. Samantha attends All Angels Episcopal Church in NYC.

ANITA HORTON
I met Anita at a Trinity Arts Conference in Dallas. Katherine Brimberry was there with

me and I remember she pulled me aside to tell me that we should bring Anita down to be a guest artist for one of our arts festivals. So we did. Ever since, we have remained fast friends. In August of 2003 she was diagnosed with advanced osteoporosis. Out of that experience of intense pain she created work that explored, with bone-like shapes and material, the fragility that lies beneath the surface. Some of this artwork is positively bone un-nerving. Compounding the disease she suffered family tragedy, and it was only by the grace of God, mediated through the steady, gentle love of friends, that she emerged not bitter but brave to name the diseases that had afflicted her. Anita attends Restoration Anglican Church in Addison, TX. 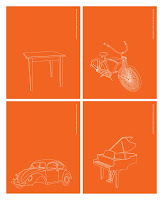 In 1999 I wrote an essay for Regeneration Quarterly. Its title was "Are Bananas Christian?" In it I argued, perhaps simplistically, that if we cannot reasonably call a banana "Christian" but rather only a good banana or a bad banana according to its kind, then we cannot reasonably, easily, lazily, naively, or hastily call a work of art "Christian." We can only call it good or bad according to its kind (medium) and to its purpose (intention, subject, context, reception). A few years ago Shaun made me supremely happy by designing a poster. In it he had placed a large and garishly colored banana. Along the curved line of the peel Shaun included the text: "This is not another Christian banana." That is the kind of witty, sharp-eyed design that Shaun has been producing over the years. He's a fabulously talented young designer, whom I'm very pleased to know. Shaun attends Austin Stone Church in Austin.

real artist really looks like. And mostly, it looks like a really difficult life. It's one thing to observe the artist as a "final product." When filmmaker Scott Derrickson appears in photographs surrounded by famous, smart people like Laura Linney and Tom Wilkinson for the premier of The Exorcism of Emily Rose, he appears as a "final product." And meanwhile, out in the land of fledgling filmmakers, the struggle against jealousy and insecurity only intensifies when (false) comparisons are made with Scott "the final product" filmmaker. But then Scott disappears for years from the public eye. He vanishes off the pages of Entertainment Weekly and Variety.com. He then turns into an artist "in process" and my guess is that it's often anything but glamorous. My point is this. I get to see the hundreds of little decisions Phaedra makes day after day to choose her artwork. Every time she chooses art, she chooses against every allure to not make art. She doesn't always choose her art, of course. Some days she gives herself fully to allure of avoidance. But more often than not these days she chooses to do something instead of nothing, and that makes me very proud of her. Phaedra attends All Saints Anglican in Durham, NC. 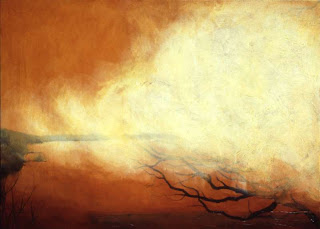 If John Michael Talbot had been born half a generation later and had been a visual artist instead of a musician, with enough funk to dress in hoodies instead of monk cowls, well, he could have been Jeff Guy. I first met him at last year's Laity Lodge retreat for ministers to artists. Jeff had that unsettling quiet manner about him that could make you fidgety if you didn't like silence for too long. But he's also mischievous. And when he laughs, it makes you love him even more. If you listen carefully, Jeff is very specific in how he answers the question, "What do you do?" He'll say, I work in the craft of painting. I love how he's resurrecting an old noun and re-introducing it into the world of fine art. I am so pleased that his work accompanies the final chapter. The art excellently and allusively captures my "hope and prayer" for the church. Jeff attends Trinity Anglican Church in Atlanta, GA.

Rod Lampard said…
Looking forward to checking this out. Just ordered a copy from Koorong here in Aus. Peace and grace.
11:28 PM