The Sayings of Bono (on the psalms) 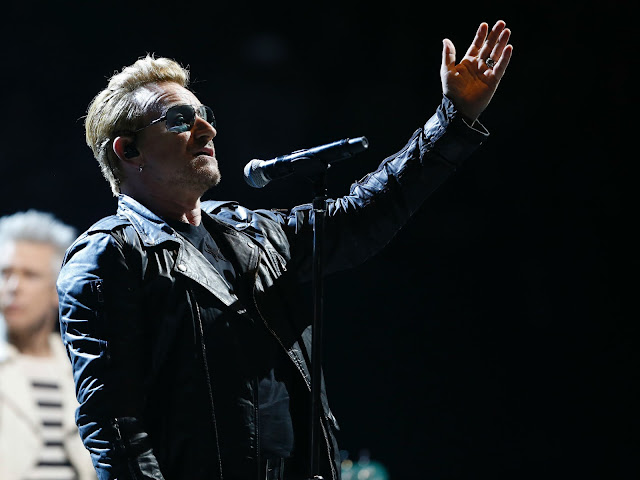 It is no secret to fans of U2 that the psalms have played a significant role in Bono's thinking on the Christian faith and in his practice of songwriting. It is also common knowledge that over the years Bono has felt a sincere affection and admiration for Eugene Peterson, who authored, among other things, The Message, a contemporary translation of the Bible. It is also true that Eugene has felt similarly towards Bono and U2 alike. Bono's observations on the psalms, which I have included below, are things that I have come across over the past couple of years. They bear witness to a serious care for the Psalter and to a fascinating line of thinking on the relation between art and Scripture.

The comments come from a wide range of sources: Bono's multi-year conversation with his journalist friend Michka Assayas, Bono's interviews with a variety of magazines, and his introduction to The Book of Psalms. Due credit must also be given to the good folks at the U2 fan site, www.atu2.com, who have kept track of Bono's relationship to Eugene better than most.

Also, I had a chance to participate in this project, which came under my work as director of Brehm Texas, a new initiative from The Brehm Center for Worship, Theology and the Arts. Stay tuned for the release of the short documentary film on April 26 via Fuller Studio. (Update: I've included the short film here, just in case you might have missed it.)


THE SAYINGS OF BONO ON THE PSALMS

1. "I discovered Eugene Peterson’s The Message through the Psalms. In the dressing room before a show, we would read them as a band, then walk out into arenas and stadiums, the words igniting us, inspiring us."

2. “Unless you have a plumb line, the wall can be built crooked. So I think, for me, that is prayer, and my life worshipping God through music.”

3. Bono frequently reads Ps. 116 from The Message at the beginning of U2’s concerts:

“What can I give back to God for the blessings he's poured out on me? I'll lift high the cup of salvation -- A toast to God! I'll pray in the name of God; I'll complete what I promised God I'd do, And I'll do it together with his people.”

4. "Some nights I would half remember and invoke the Psalmists words directly over the plangent opening fanfare of ‘Where the Streets Have No Name’… a song which is an invocation itself. No matter how good or bad a U2 show gets, this is one of those moments when the unreliable arrival of the divine presence in the house is more, not less, likely.”

5. “The poetic heart of The Message is that there is no dogma apart from the flesh becoming word.”

6. “When the good book connects with our good lives, when the word sings in our hearts, there is a holy spirit busy in the translating. The most luminous of all translations of the word, was the one into a single unique life, that of Jesus of Nazareth.”

7. “Peterson too has the heart of a musician… his intellectual rigor and humility saving him from the vicissitudes that have the rest of us banging tambourines as he lays out a feast on the altar. While a lot of the time we’re all still babbling in Babel, in The Message, Peterson is often speaking in tongues, speaking in a language that decodes and deciphers us, the reader, a language to approach the very subject of God.”

8. “Eugene Peterson is upfront with us in saying that his own translation, The Message, is a paraphrase. That we should receive it as through the filter of his own life as a pastor with a special love of language and a passion for the Rhema, the living word, as it reveals itself today.”

9. “He understands that for the word to live, for it to leap from the page and into our lives, the only time is now, the only place is here. As he has put it eloquently, ‘If Holy Scripture is to be something other than mere gossip about God, it must be internalized.’”

Q: Favorite reading materials at the moment? A: “I'm reading The Heart Is Deceitful Above All Things by JT LeRoy. It's blowing my mind, just the directness of the prose. And, well, I don't want to come off wrong in this most unholy of wars, but there's a translation of Scriptures - the New Testament and the Books of Wisdom - that this guy Eugene Peterson has undertaken. It has been a great strength to me. He's a poet and a scholar, and he's brought the text back to the tone in which the books were written. A lot of the Gospels were written in common kind of marketspeak. They were not at all highfalutin like the King James Version of the Bible, from which all Goths get their inspiration. I love the sort of archery of that, but it's not representative of the original writings.”

11. “Words and music did for me what solid, even rigorous, religious argument could never do -- they introduced me to God, not belief in God, more an experiential sense of GOD. Over art, literature, girls, my mates, the way in to my spirit was a combination of words and music. As a result, the Book of Psalms always felt open to me and led me to the poetry of Ecclesiastes, the Song of Solomon, the book of John.”

12. “Why do we need the lyric poetry of the psalms? Why do we now? Because the only way we can approach God is if we’re honest through metaphor, through symbol, so art becomes essential, not decorative, not as an adjunct, but actually as a way, symbol, we use it all the time, you know, we, beautiful, we’ve always loved the symbols of wetting, baptism, going under the water. So I love symbols and I learned about art, I learned the prophets, I learned from Jeremiah, with that book, and that really changed me.”

13. “Coolness might help in your negotiation with people through the world, maybe, but it is impossible to meet God with sunglasses on. The gauche nature of awe, of worship, the wonderment at the world around you.”

14. “This is where David was said to have composed his first psalm -- a blues. That's what a lot of the psalms feel like to me, the blues. Man shouting at God -- "My God, my God, why hast thou forsaken me? Why art thou so far from helping me?" (Psalm 22).”

15. "As a songwriter, it was very clear to me that you [Eugene] were a poet as well as a scholar. You brought the musicality to God's Word that I'm sure was there, was always there in intention."

16. “The Psalter may be a font of gospel music, but for me it's despair that the psalmist really reveals and the nature of his special relationship with God. Honesty, even to the point of anger. "How long, Lord? Wilt thou hide thyself forever?" (Psalm 89), or "Answer me when I call" (Psalm 5).”

17. “Psalm 40 is interesting in that it suggests a time in which grace will replace karma, and love will replace the very strict laws of Moses (in other words, fulfil them). I love that thought. David, who committed some of the most selfish as well as selfless acts, was depending on it. That the scriptures are brim full of hustlers, murderers, cowards, adulterers and mercenaries used to shock me. Now it is a source of great comfort.”