Wendell Berry on the Human Body

As I anticipate our upcoming Laity Lodge retreat, "Artists as Stewards of Physical Reality," I am reminded of this excellent essay by Wendell Berry, "The Body and the Earth." I commend the whole essay, which can be found in his book The Art of the Commonplace, from which I choose the following excerpts.


Question: "How does a human pass through youth to maturity without 'breaking down'?"

Answer: "[With the] help from tradition, through ceremonies and rituals, rites of passage at the most difficult stages."

The difficulty probably lies in our narrowed understanding of the word health. That there is some connection between how we feel and what we eat, between our bodies and the earth, is acknowledged when we say that we must "eat right to keep fit" or that we should eat "a balanced diet." But by health we mean little more than how we feel. We are healthy, we think, if we do not feel any pain or too much pain, and if we are strong enough to do our work. But the concept of health is rooted in the concept of wholeness. To be healthy is to be whole.

The word health belongs to a family of words, a listing of which will suggest how far the consideration of health must carry us: heal, whole, wholesome, hale, hallow, holy. And so it is possible to give a definition to health that is positive and far more elaborate than that given to it by most medical doctors and the officers of public health.

If the body is healthy, then it is whole. But how can it be whole and yet be dependent, as it obviously is, upon other bodies and upon the earth, upon all the rest of Creation, in fact? It immediately becomes clear that the health or wholeness of the body is a vast subject, and that to preserve it calls for a vast enterprise. Blake said that "Man has no Body distinct from his Soul..." and thus acknowledged the convergence of health and holiness.

It is therefore absurd to approach the subject of health piecemeal with a departmentalized band of specialists. A medical doctor uninterested in nutrition, in agriculture, in the wholesomeness of mind and spirit is as absurd as a farmer who is uninterested in health. Our fragmentation of this subject cannot be our cure, because it is our disease.

The body cannot be whole alone. Persons cannot be whole alone. It is wrong to think that bodily health is compatible with spiritual confusion or cultural disorder, or with polluted air and water or impoverished soil. Intellectually, we know that these patterns of interdependence exist; we understand them better now perhaps than we ever have before; yet modern social and cultural patterns contradict them and make it difficult or impossible to honor them in practice. To try to heal the body alone is to collaborate in the destruction of the body.

Healing is impossible in loneliness; it is the opposite of loneliness. Conviviality is heating. To be healed we must come with all the other creatures to the feast of Creation.

Divided, set against each other, body and soul drive each other to extremes of misapprehension and folly. Nothing could be more absurd than to despise the body and yet yearn for its resurrection. In reaction to this supposedly religious attitude, we get, not reverence or respect for the body, but another kind of contempt: the desire to comfort and indulge the body with equal disregard for its health.

The "dialogue of body and soul" in our time is being carried on between those who despise the body for the sake of its resurrection and those, diseased by bodily extravagance and lack of exercise, who nevertheless desire longevity above all things. These think that they oppose each other, and yet they could not exist apart. They are locked in a conflict that is really their collaboration in the destruction of soul and body both.

The Bible's aim, as I read it ' is not the freeing of the spirit from the world. It is the handbook of their interaction. It says that they cannot be divided; that their mutuality, their unity, is inescapable; that they are not reconciled in division, but in harmony. What else can be meant by the resurrection of the body?

Body, soul (or mind or spirit), community, and world are all susceptible to each other's influence, and they are all conductors of each other's influence. The body is damaged by the bewilderment of the spirit, and it conducts the influence of that bewilderment into the earth, the earth conducts it into the community, and so on. If a farmer fails to understand what health is, his farm becomes unhealthy; it produces unhealthy food, which damages the health of the community.

Though many people, in health, are beautiful, very few resemble these models. The result is widespread suffering that does immeasurable damage both to individual persons and to the society as a whole. The result is another absurd pseudo-ritual, "accepting one's body," which may take years or may be the distraction of a lifetime. Woe to the man who is short or skinny or bald. Woe to the man with a big nose.

Woe, above all, to the woman with small breasts or a muscular body or strong features; Homer and Solomon might have thought her beautiful, but she will see her own beauty only by a difficult rebellion. And like the crisis of identity, this crisis of the body brings a helpless dependence on cures. One spends one's life dressing and "making up" to compensate for one's supposed deficiencies. Again, the cure preserves the disease. And the putative healer is the guru of style and beauty aid.

The sufferer is by definition a customer. 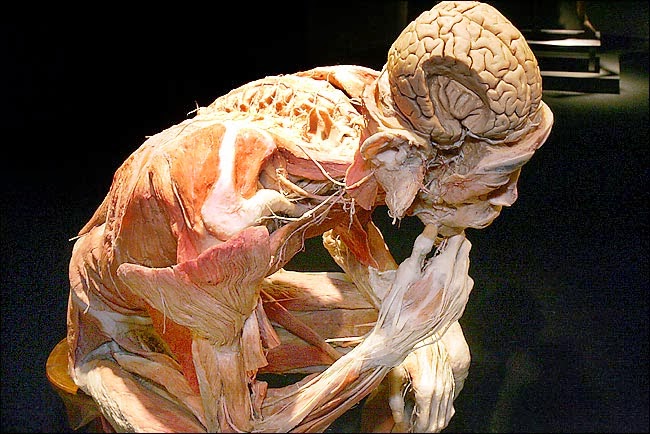