The habits of six filmmakers 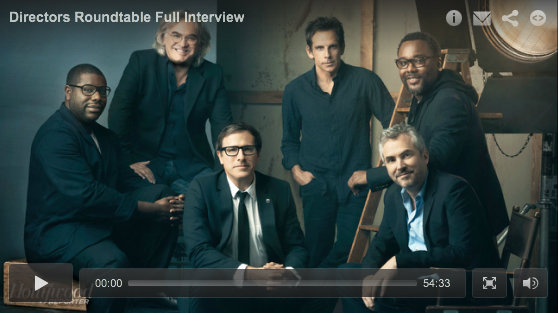 This is great interview with six filmmakers whose names you will probably recognize. In it they discuss having a "voice," the challenges of caring for a family while making movies, the fears of an artist, the need to be fearless about feedback on your art, the role that an audience plays in determining the shape and meaning of your work, the wisdom that comes with years of faithful diligence and that tells you when you should take a break every now and then, formal schooling vs. nonformal schooling, the uniqueness of each person's creative activities, improvisation vs. highly scripted creativity, and more. You can find the whole interview here.

In the mid-1990s, Ben Stiller spent some time sleeping on David O. Russell's couch. That's when both were struggling to make a name for themselves and working on Russell's second feature, Flirting With Disaster (1996), in which Stiller starred.


Decades later, they're two of America's most versatile directors -- Stiller, 47, is responsible for this year's The Secret Life of Walter Mitty, while Russell, 55, has American Hustle -- but getting there has meant overcoming serious bumps along the way. That's an experience shared by many of the other helmers on this year's Director Roundtable: Gravity's Alfonso Cuaron, 51, The Butler's Lee Daniels, 53, Captain Phillips' Paul Greengrass, 58, and 12 Years a Slave's Steve McQueen, 44.
What's the hardest thing about being a director?
David O. Russell: To not know what your inspiration is. And that was hardest for me about 10 years ago. I was very humbled to sort of lose my way after Three Kings, in my personal life and in my professional life, and it really made me a better filmmaker and, I think, a better person. I feel I found a kind of story with a kind of character that's been three movies deep now -- The Fighter, Silver Linings Playbook and American Hustle.
Paul Greengrass: That kind of crisis, directors don't talk about enough. I had the same. I had a real problem trying to marry up where I began, which was in documentaries, with features. When I got into my 40s, I had a real crisis, 'cause I felt I'd lost touch with what had got me shooting in the first place. I'd spent 10 years making films and getting further and further away from my point of view. And the funny thing is, it felt like I was getting worse. And it was only when I had to go through that struggle, that crisis, over a number of films [that I found] what was truly inside. You suddenly feel free.
Russell: Yes. You're clear what you want to say. There's nothing worse than wanting to tell a story or sing a song and not knowing how to do it. And when I was younger, that was true. It's very frustrating to want to do something and not know how to do it. And then when you find it, it's liberating.
Steve McQueen: How did you get lost?