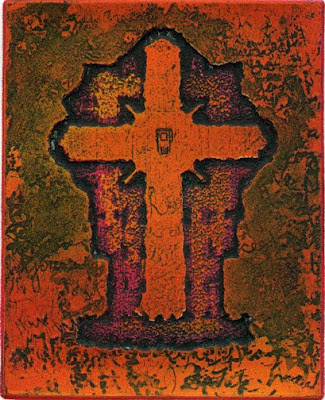 "Lent should never be morose -- an annual ordeal during which we begrudgingly forgo a handful of pleasures. Instead, we ought to approach Lent as an opportunity, not a requirement. After all, it is meant to be the church's springtime, a time when, out of the darkness of sin's winter, a repentant, empowered people emerges. No wonder one liturgy refers to it as 'this joyful season'."

-- from the Introduction to Bread and Wine: Readings for Lent and Easter

Two months ago I dreaded the arrival of Lent. I simply felt no desire to give up anything. I feel tired. I'm pathetic at fasting. And I like to keep my options open. But that's the one thing Lent, and a Lenten way of life, will not brook: to live as I please when I please.

I'm better today. I spent a good deal of the morning washing dishes and tidying up the kitchen after last night's dinner party. We'd invited our friends the Van Dykes to celebrate Shrove Tuesday with us. We ate spicy sausages, homemade hashbrowns (yum yum), scrambled eggs, fresh strawberries and gluten-free pancakes that totally rocked (that is, they tasted great, not like rocks, which unfortunately often describes the taste of gluten-free substitutes). We washed it down with fresh-squeezed orange juice, and over a game of Farkle we nibbled at a crisply cold mango sorbet.

As I washed the dishes this morning I prayed. I prayed for a right heart. Outside the window above the sink I watched our blankets on the clothing line swaying back and forth under a gusty wind. They looked like multi-colored dancers come to announce the new season. I want to embrace this year's Lent, despite my begrudging heart. If there is something God wants to bring to light or change significantly, I want to be obedient.

Which of course is not always easy.

Phaedra and I will be observing our Lenten abstinences in common. I might do the Master Cleanse on my own--get my gut cleaned out. She'll work through exercises in The Artist Way by herself. But mostly we fare much better when we share our "sufferings" together. Here are the disciplines we will be embracing with God's help.

No sweets, spirits or dark drinks. We are foregoing all desserts and anything that obviously looks like a sweet thing. Brown suger in my granola doesn't count. Nesquik Chocolate Milk does. There'll be no wine after dinner or margaritas with our Mexican food. And we're letting go of our common love of black tea. It's all Rooibos from here to Easter.

Computers off at 7:00 pm. I told Phaedra that my computer is robbing me of my evenings and it is all of my own doing. I have no need really to be doodling through the internet after dinner. I've got all day long. Why suck my evenings dry?

"And when at last we drag our wearied bodies home, we give ourselves just one more glance at the benevolent dictator we call the internet to rummage around for things we think we need, we’re not sure why, when we should be under our covers, eyes closed, mouth shut, prayed up."

Why not instead turn the computer off and spend our evenings sitting in our lovely living room reading or listening to music. Phaedra can knit. I can meander without guilt through art books that I constantly buy but never make time to read.

I can't tell you how happy, happy, happy I am at this new nightlife that awaits us for the next "forty" days.

Memorizing Scripture. I used to memorize truckloads of Scripture. I was an Awana kids after all, at least for all of fifth grade. The guy who discipled me in high school, Matt Fries, made me memorize entire books of the Bible. In Guatemala as a kid I memorized Bible verses for cookies and lemonade. David Adam in The Rhythm of Life says that the result of committing Scripture to memory is that it has a chance to "vibrate" in our minds throughout the course of the day.

I got lazy in my twenties and now I'm on the backside of my thirties with nary a Scripture vibrating in my head. I know a good deal of it. I got a degree in it for crying out loud. But there's no substitute for having Scripture at the tip of your tongue. I want to masticate the Word.

Writing Thank You Cards and Other Notes. We stink at writing thank you cards. So we're taking this one on as an act of engagement. We're going to give up time and energy to tell people how much we do care for them. It does folks no good if our sentiments stay in our head.

Special Monetary Gifts. We're not rolling in the dough by any stretch of the imagination. But there's nothing like giving away money till it hurts to see if ole Mammon is hanging out anywhere in the house.

Right now I'm putting together a Lenten devotional for Christ Church. I'm late. I should have had it prepared for tonight. I told Cliff I was so sorry. I'll have it ready by Sunday. But I do think it's a wonderful thing for an entire congregation to be praying the same prayers all through Lent.

Friday night Phaedra and I will travel to San Antonio to hear Conspirare's performance of Rachmaninoff's Vespers. As the director notes on Conspirare's website.

"Rachmaninoff's Vespers is universally regarded as the crowning achievement of the "Golden Age" of Russian Orthodox sacred music, as well one of the greatest works of choral music ever written. It was, in fact, one of the composer's two favorite compositions (along with The Bells). [Conspirare's] chamber choir will expand to 38 singers, with added weight in the bass section in the tradition of the Russian basso profundo."

A friend gave us the tickets as a gift. It is a gift that we received very gratefully, as it will help our souls enter more fully into Lent with the aid of beautiful music.

"The boy was very proud that he had been born in a wreck. He had always felt that it set his existence apart from the ordinary one and he had understood from it that the plans of God for him were special, even though nothing of consequence had happened to him so far. Often when he walked in the woods and came upon some bush a little removed from the rest, his breath would catch in his throat and he would stop and wait for the bush to burst into flame. It had not done it yet."

From The Violent Bear It Away, Flannery O'Connor

Essentially Heather said…
As always after reading your blog, I come away with encouraging thoughts and extraordinary challenges...and a sense of comraderie and kindred spirit-ness.
This year, well since the symposium, I have been so much more mindful of the Christian calendar. And what comes to mind most is the talk given by John W(won't attempt to spell his name correctly) on liturgical art...the art of the "we." I'm being drawn into community in ways I didn't know were possible, so thank you, Mr. Taylor for your part in that and the myriad of other things from the symposium that altered my life and my perspective.

This is the first year I've "participated" in Lent, but I don't think it will be the last. I have given up internet usage from the time I get up until at least 2 p.m. (when the kids are quiet for an hour or so)...and then, I'm trying to limit it as much as possible until they're in bed. Just 2 days into this and I'm seeing how much time I fritter away in the morning on the internet. I hope this is a lasting change.

And Bible memory... I too was an AWANA student...I was excellent at memorizing a verse just seconds before reciting it :-) So, I think I shall add this to my Lenten observance as well as I have become most lazy at memorizing. I also hope this discipline sticks past Lent.

And the Thank Yous...what a good one. OK...I'm challenged...to become better with my thank yous. I think them up, but now I'm challenged to let them be known.

Thanks, David. A thoroughly sharpening experience this reading of your blog has turned out to be.

w. david o. taylor said…
Heather, you're very kind. I've been observing Lent since my first year of graduate school, and I'm certainly much the better for it. I had joined an Anglican church and had begun reading beyond my Protestant ken. I realized a world of good awaited me in the practice of a discipline that pulled me into the larger life of the church. I did not have to be alone.

I did not have to be solely responsible for my spiritual well-being. I could lean into the church and trust that it would carry me, it would help me bear my burdens, and it would do so through the life of brothers and sisters who walked the via peregrinus with me.

L.L. Barkat said…
I love the image. And that you quote Flannery. And, wow, they're giving up electricity.

Peace for your peaceful evenings, knitting together something more than yarn... your hearts.

(Came by, btw, at the recommendation of a Laity Lodge person. Great blog.)
3:56 PM

Joel Limpic said…
love the thoughts, david... thanks for sharing!! loved the quote that speaks of lent as an opportunity. to remember. i think the things you're fasting from and engaging in and giving to are beautiful and thoughtful. also, the idea of scripture "vibrating" in our minds is a helpful image that speaks of its power even when we're unaware of its presence. alright, that's it for now.
12:55 PM

Kathleen Borkowski said…
Pastor David, thanks for the encouragement, really sometimes when I read your words I feel challenged in such a positive way.
You've inspired me to include daily readings from Kathleen Norris' book Amazing Grace and also to incorporate some exercises from The Artist's Way &/or Corita Kent's Learning By Heart on my Lenten journey.
4:01 PM

w. david o. taylor said…
L.L., thanks for stopping in to say hi. Enjoyed rummaging through your website.

Joel, thank you for your kind words. Blessings to you in your Lenten observances.

Kathleen, Phaedra is finding so much comfort and succor from The Artist's Way these days. Every night she sits in bed and reads through a few pages. Sometimes she'll read excerpts out loud to me. I'm so encouraged to hear them. Being an artist, sustaining the work of an artist--sustaining it with a good mind and good heart--is a hard deal oftentimes. The Artist's Way keeps reminding her of truth.
6:15 AM

Rosie Perera said…
I've given up Facebook for Lent. I actually deactivated my account. My full intent was to give up all "non-essential" Internet usage (which includes reading blogs, by the way) but that is such a fuzzy concept and I've not been very good at keeping to it, as you can tell.
5:25 AM