An Emporium of Artistic Thingamabobs 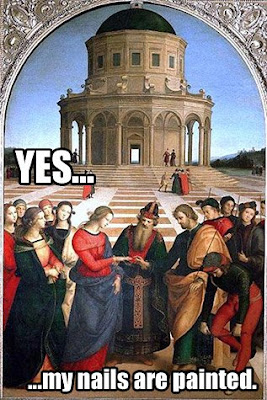 "In drama we celebrate our impotence before the gods. In comedy the gods say I'm going to save you anyway."

--David Mamet, playwright, essayist, filmmaker who received a Tony Award and Pulitzer for Glengarry Glen Ross, and Oscar nominations, as screenwriter, for The Verdict and Wag the Dog

Wednesday afternoon I sat at the Subway's shop near campus editing Lauren Winner's contribution to the book. What book? The book I'm editing--for Baker Books on art and the church. The book that's due in a week. The book that's coming out of the Transforming Culture symposium from a million years ago. With limited time I work as I can, where I can. Today it was Subway's. For the record I ate a six-inch veggie on flatbread.

Thursday evening I drove back down to the University of Texas campus in order to hear David Mamet get poorly interviewed by the president of the university, Dr. William Powers Jr. Dr. Powers couldn't stop listening to his own opinions. Oy vey. My friend Jeffrey Travis and I sat together and kept whispering to each other in Spanish, "Ay, Dios mio, que me esta matando." But Mamet was a character, and he's stinking smart.

He had some pretty good one-liners too. During the Q&A time, one smartaleck with his red pullover cowl thrown over his face stands up and says: "So, uh, yo, what are your top two favorite cuss words?" Half the audience laughs. David grimaces, then smirks and says, "Well, I probably say golly too much," then promptly marches on to the next questioner. The other half of the audience laughs.

Ok, this is the blog where I dump all the things I've been collecting in my inbox, labeled "Blog Material." It comes in no logical order. Use whatever you find useful or curious. 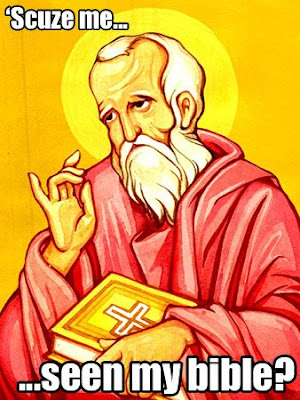 1. A massive bibliograph of books on worship that includes art-n-worship books: here. It's compiled by the Robert E. Webber Institute for Worship Studies. I'm still grieved that Robert died last year. The man who compiled this list is Mark Torgerson. Funnily enough, I reviewed his book An Architecture of Immanence for Books & Culture.

2. A CD with 100 images of (sacred) contemporary art: here. Sandra Bowden has been working on this project, "Images of faith," for three years. She's finally done. Well done,Sandra! It'll be an excellent resource for churches as well as people who want to look like they know what they're talking about in (part of) the contemporary art scene.

3. A Redeemer Pres. church in Indianapolis with what looks like a good thing going on with the arts: here. See also here.

- Reintarnation: Coming back to life as a hillbilly.

- Karmageddon: It's like, when everybody is sending off all these really bad vibes, right? And then, like, the Earth explodes and it's like, a serious bummer.

- Dopeler Effect: The tendency of stupid ideas to seem smarter when they come at you rapidly.

- Beelzebug (n.): Satan in the form of a mosquito, that gets into your bedroom at three in the morning and cannot be cast out.

- Osteopornosis: A degenerate disease. (This one got extra credit.)

- Decafalon (n.): The grueling event of getting through the day consuming only things that are good for you.

6. A Swedish philosopher says art needs spirituality. (passed along by my friend Kate.)

7. Josh Harris' pretty funny advice on how to write a book in 16 easy steps.

8. If this were an image of first-world activity I'd suspect CGI. But since I grew up watching people perform astouding feats of balance, I have no hesitation to watch and simply be amazed.

10. And lastly, a site Adam Langley passed along called LOLSaints. That's where the images in this blog comes from. Pretty hu-larious. 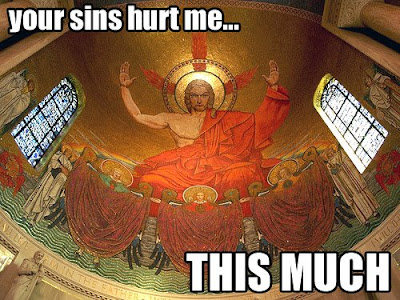 tamarahillmurphy.com said…
Ironically, I just ordered the Robert Webber study guides for the Complete Library of Christian Worship series. I thought they may be excellent resource for Union Center. I kept meaning to ask you your thoughts on Webber's books. Thanks for beating me to it with this post!
4:21 PM

Adam said…
Nice :) I'm loving LOLsaints...haha Dude, they should have gotten you to come speak at this Big Idea conference at Truett. (sigh)
9:51 AM

w. david o. taylor said…
The first Webber book I read was *Evangelicals on the Trail to Cantebury*. And that's where I landed. But I really do hate it when people die before they're supposed to.

It's a wacky world out there, hey.

And now I'm going over to LOLSaints to get humor therapy.
2:06 PM