Plight of the Midnight Writer 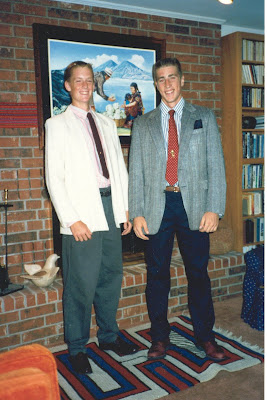 My first year of college I attended Moody Bible Institute. Sitting on North LaSalle Boulevard, in the thick of downtown Chicago, the school started out in 1886 as the Chicago Evangelization Society. To this day it remains distinguished for its firm commitment to evangelism and to the fundamentals of Christian faith.

I don't like it. I don't want to feel embarrassed; it's silly. There was much good that came from my freshman year. I was exposed to inner city ministry--which several years later directly influenced me to participate in an East Austin program. I interned with a chaplain at the Cook County Public Hospital. I trashed my pride by doing lots of street evangelism on Friday nights (not the way to cultivate coolness). I studied with professors who deeply loved the Lord and his Word. And I have very fond memories of many of my dormmates, even if I've no clue where they are today. (Facebook here I come.)

And I lived in the middle of Chicago, which I still think is pretty awesome.

I've kept a few papers from that year. One is the MBI Dress Code, and I have to say it makes me giggle. I honestly didn't mind dressing up for class. I liked ties. I dug those early 90s mock-turtle necks. I mostly endured the ban to watch movies, dance, and play cards. But then there's this: the Additional Guidelines. Here are the first three.

1. Hair is to be well-groomed and should avoid extremes. (Ok, that totally kills me. In high school I never imagined that I'd grow up and become a one-man hair circus. Besides, 9 times out of 10 my hair changes are unplanned. I wake up, decide it's time to change, we change. But I don't think my hairdos would fare well with Dwight Lymon Moody.)

2. Beards may be worn with the following guidelines:

a. The beard cannot be grown while the student is attending classes or residing on campus. (I know what they mean, but it sounds like a futile prohibition against real-time growth.)
b. The beard must be full and kept well-groomed.

(I don't think I could grow a beard at 18 and I don't think I spent much time wondering about beards. It was only four years later, during a study abroad stint in Germany, traveling without a razor, that I defaulted into a beard experiment. And mostly it worked. I cringe when I look at pictures. But then again, I may be cringing at my 1994 clothing style.)

3. Earrings are not to be worn by men at any time. (I pierced my left ear two years later. As I explained to my parents I did it to identify with my workmates at Chuy's, the best Tex-Mex restaurant in Austin. At Chuy's it was Halloween every day. Nobody, no waiter, busser, cocktail waitress or bartender dressed plainly. And when I come in with my neon "His Pain, Your Gain" t-shirts and enormous wooden cross swinging from my neck, well, I figured one gold earring might help me fit in.)

But here's why I'm writing this entry. My freshman year I was a very bad writer. Straight up. No false humility. I'm the poster-boy for latebloomers and I was late in learning how to write clean, crisp English.

In one of my Lit & Comp classes I turned in a paper with a woeful note. In the note I asked the teacher, a gallic Ms. de Rosset, to take pity on me. My printer had jammed and in consequence the ink slurred here and there. It was legible but ugly. But I'd run out of time and the note was an attempt to obviate a punishment for "presentation."

When I received my paper back Ms. de Rosset had attached a poem to the back page. My grade, by the way, was a B minus. Here is the poem which I've kept all these years. I'm not sure if my woeful note obtained her pity or severity, and no doubt she'd seen many melodramatic students like me, but the grade no longer matters and I got a great poem out of the deal.

I offer it to all who've sweated over a paper and felt the desire to express their woe with a poem.

PLIGHT OF THE MIDNIGHT WRITER

Hark, English teacher, and shed a tear
Here's why my term paper isn't here,
The 6th of March has come so fast
As usual I was the very last
To go to the library, get some books
The librarians really gave me some looks.
I went to the shelves, there was nothing there,
I tell you, they were completely bare!
When I finish this paper tonight
I'll hang a lamp for a signal light
If my light you do not see,
Please make funeral arrangements for me.
I can't see why anyone would care
When a book was printed, by whom, or where
Ibids, and footnotes, bibliography, too
Who dreams up these things that I have to do?
Be ready to ride and spread the alarm
That I'm eligible for the "happy farm."
It is four by the clock, and I'm still here
Writing my paper with frustration and fear
I'll scream if I have to take another note.
Through the night I have written and read
By this time I am nearly dead
Under piles of references, on the work goes
I only pause ot take N0-Doz.
When all the agony is past
When the page I write is finally the last,
I will remember to be of good cheer
The ordeal is over until next year. 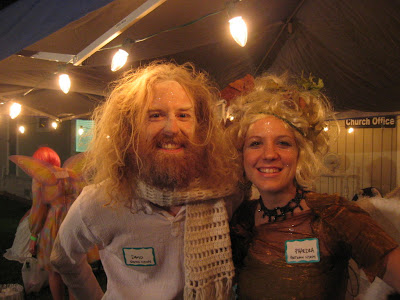 (One of our better hair moments.) 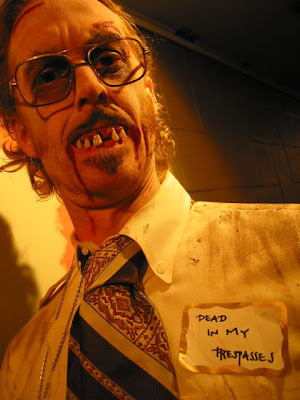 (A Halloween outfit that I double-dog dare Dwight Lymon Moody not to like.)

Cherry Moore said…
My first job after college was "Circulation Assistant" in the library at Moody Bible Institute, a job I had for one year. I share some of your mixed feelings about Moody, David, but for different reasons. I now describe my position on the Christian continuum as "hopeful moderate" but I know that some of those more-conservative-than-I-need-to-be Moody faculty and staff would nonetheless have died for me.
I firmly believe all Christians don't have to believe alike but we can love alike. And thank God we don't all have to wear our hair alike!

w. david o. taylor said…
Thank you, Cherry. I don't mean for my comments to come off as simple meanness. There's plenty for which I am grateful; and I imagine there are vast tracks of agreement with my former professors. But I look back on that year and feel conflicting emotions. When I reflect back in another ten or twenty years I will likely see something different, perhaps more gentle, and for that I'll be grateful.

I think what chaffed me about the "guidelines" was not the restriction per se but the way in which they created what I believe is a precarious identity marker for Christians. Ask students to dress nicely and groom their hair. That's fine. You need a common culture. But be careful when you associate "nice" (conservative American culture) dress and groomed (conservative American 20th century culture) hair with upright Christian life.

Let's not forget, our founding fathers, including devout Christians, wore not only long locks of hair but wigs. And Charles Wesley, daring artist he, wore curls. The Revolutionary rebels, rebels for God, the rebel pastors? They got the cool ponytails.
9:34 AM

tamarahillmurphy.com said…
Funny. I thought this post was going to illuminate us about your book deadline. : )
(sorry, was that evil of me?)
6:42 PM

w. david o. taylor said…
Anna, I don't know if you'll read this, but, whaddup! Yes, it certainly is your brother. I have such fond memories of my friendship with him and the rest of your family. I saw Josh briefly in October. It'd been such a long time. Sigh. Well, I do hope you're well and I look forward to rummaging through your blogs.
9:53 AM