In Company with the Golden-Mouthed 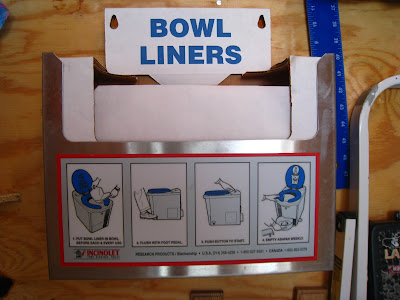 "The best advice for how to get started was given by Flannery O'Connor to one of her correspondents: Sit at your desk for three hours each morning. Don't allow yourself to read, answer phone calls, tidy up, or anything else. You sit there. If you are not writing, you still sit there. Eventually, you will write.

Of course, few have the luxury of free mornings. (As to this, O'Connor recommended a life without encumbrances, or finding a wealthy spouse.) But, as a writer, you need to do what you can, as you can, and devote clear-headed hours to the task.)

--Harold Fickett, "Gushers and Bleeders," in A Syllable of Water

John of Antioch was a fourth century Greek church father. A one-time patriarch of Constantinople (398-407 AD) and an earnest advocate for the poor and needy, he gained certain popularity for his oratory skills. Not long after his death he was given the sobriquet chrysostomos or "golden-mouthed," and henceforth he has been known as St. John Chrysostom. It is in the spirit of St. John's love for good words that Richard Foster gathered a small group of writerly friends in 1986 to form a group which bears his name: The Chrysostom Society.

Once a year this group--which has added to its numbers and includes everything from Baptist to Orthodox and Quaker to Catholic--gathers to share their writings, friendship and Christian faith. On occasion they collaborate on a book. We own two. The latest is A Syllable of Water and it's all about the writer's life. The other used to be called The Classics We've Read and the Difference They've Made. Baker reissued it in 2002 as More Than Words. But it's Eugene Peterson's essay on Dostoevsky that made me choose Regent College for seminary. 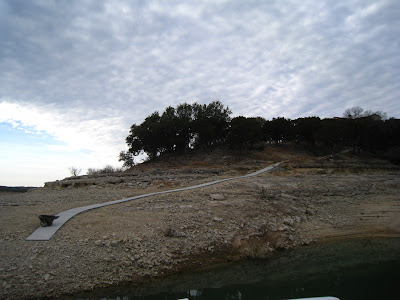 This past weekend Phaedra and I were fortunate to share the same space with this group. She'd been invited by Laity Lodge to lead an arts workshop on their behalf. I was there to meet with Steven Purcell for the April retreat. Mostly we wanted to stay out of their way and let them enjoy each other's coveted company. But here and there, and usually over meals, we enjoyed brief conversation. It was a blessing to be, well, near them. As Phaedra reminded me, they're people who have paid their dues with sweat and toil.

The group includes folks like Foster, Philip Yancey, Walter Wangerin, Lucy Shaw, Virginia Stem Owens, Jeanne Murray Walker, Harold Fickett, Bill and Emilie Griffin who met in the mid-1950s in a theater class run by Edward Albee, he of Who's Afraid of Virginia Wolf, Greg Wolfe, the beautiful poet Robert Siegel whose A Pentecost of Finches Phaedra and I have been ruminating for the last year, John Wilson, and, though not present on the weekend, folks like Stephen Lawhead, Scott Cairns, Calvin Miller, and, as Bill Griffin put it to us, "the only one yet to die on us," Madeleine L'Engle. They've also begun to add younger people like Jeffrey Overstreet.

In short: some very good people with a very good grasp of the English language. 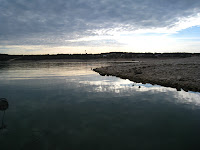 John Hoyte, Luci's husband, was also in attendance. Over lunch of chicken fajitas one day I asked him where he grew up. In China, he said, with the China Inland Mission. "You know," he remarked, scratching his white hairs, "it was all faith missions back then with CIM. Nobody asked for money. We were just to pray and trust. A letter could take up to six weeks to arrive home. The timing of providence was a strange thing. Now you can send emails." He laughs. "Around what time did you live in China?" I ask. "In the 1940s." Huh. "So, uh, did you ever meet that Chariots of Fire guy, you know, that running guy?" I grin. He smiles. He says, "Yes, we were in the internment camp." Oh. Wow. "How old were you?" Phaedra asks. "I was there," he answers, "from age 9 to 13." Hearing that from this cheery, inveterately kind man makes us feel humble and grateful. And it made the 20th century feel very small.

Jeff Johnson, the selah-celtic-chant-contemplative-rockstar-liturgy-dude, led the group in worship over the weekend. He is one funny guy. We like him so much. He told us a little story on our last morning as we sat in the kitchen and ate a bowl of cold cereal. He said he was talking with Eugene Peterson. Eugene asked him how he came upon the name "Selah" for the service that he leads. Jeff went on to talk about the Psalms. And blah blah blah. And there's this notation that blah blah likely signifies rest. And so on blah blah, hence a rest-ful contemplative service. Eugene listened attentively, his eyes focused. Then Eugene says, well, that's interesting.

And when the guy who wrote the Bible says that's interesting, you know there's a chance you screwed up something Biblely.

He says, well, you know, Jeff, I've done a lot of study on that word. It's a fascinating word. I read the Hebrew. I try to read behind the Hebrew. Scholars have all kinds of opinions on it. The rabbis tug it to death, this way and that. But after reading commentaries and books and articles and the speculation of liturgists and linguists, oh, you know, on and on how it goes, I found the answer in an obscure manuscript. Jeff's ears burned. Eugene's answer might throw his Selah joint into an identity crisis. Eugene leans in. He whispers in his gravely voice. "Jeff, it's a cuss word." Jeff looks at him dumbfounded. A what? Then Eugene cracks a smile. And Jeff loses it, laughing and laughing. A cuss word. Selah.

Anyhoo, Phaedra made art, I took naps and talked shop with Steven. I avoided the outdoors because of the damnable cedar pollen. We enjoyed a sweet time of conversation with Steven and Amy. 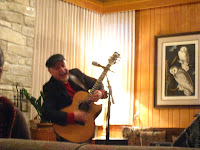 guileless, sweet-spirited, guitar-licking monster, high-pitched angel-voiced Mister Phil Keaggy. And he is one classy man. The Chrysostom peeps had asked him to make music for the occasion of their annual sojourn to Central Texas. Saint John C. is renowned for his "Divine Liturgy," so appropriately Phil made words sing and dance.

I first heard him back in 1990ish. I told him this past Saturday night that his music had left a strong impression on me as a 19-year old. I was a devoted fan of Michael Card, John M. Talbot, Keith Green--the folksy worship guys. But the lone tape I owned of Keaggy's was an instrumental album. And while I didn't have the conceptual language back then to describe my experience, his music--without words, without Christian lyrics to justify its worth--made my heart happy, and I know now that I was experiencing folk music as beautiful. I'd known this of classical music. I now knew it with Keaggy's finger-picking virtuosity. 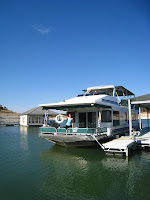 So there we go. Phaedra and I celebrated a lovely anniversary, courtesy of a friend, on a houseboat on Lake Travis. We spent an afternoon in the German-flavored town of Fredericksburg. We rested out at the Laity Lodge. And we felt very grateful for the grace that God has given us to make it through one year of marriage. As Steven pointed out to us, we've been married as many weeks as Eugene and Jan Peterson have years: 51. One year at a time, I guess.

Tomorrow I fly out to Greensboro, NC, for the annual Anglican Mission In America (AMIA) conference. I'll join Cliff and Christine and a few of the pastoral staff from our homechurch, Christ Church. While there I'll be talking with bishops about my interest to pursue ordination. But when I return on Saturday night, February 1, we'll begin, God be praised, a two-month run of no travel. Ah, yes. Home. Stability. Rhythm. Garage clean-out. Tea. Naps. Ahh. Joy, joy, joy.

And now I will go kiss my wife who is in the kitchen making chili. 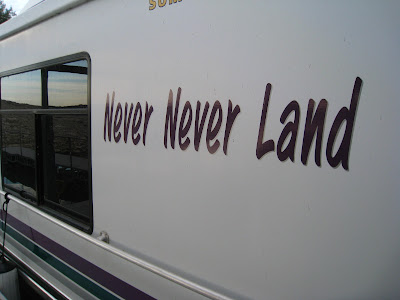 (The given name of the house boat. Although I think it should have been named the always sloshing back and forth house boat.) 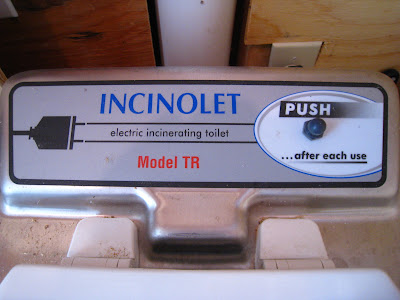 (If you wanted to go #1 you could use the toilet in the boat house. If you wanted to go #2 you needed to go out onto the dock, into the woodshed, and use the Incinolet. Instructions are included at the top of this blog. You don't flush, you incinerate. I told Phaedra they should call it the fire crapper.) 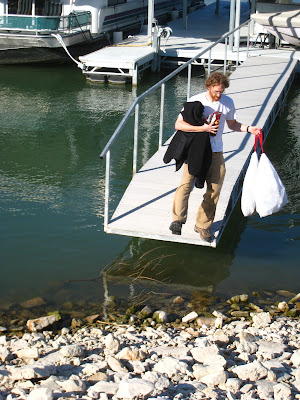 (The gang-plank walkway didn't always align with the shore. There I am holding a pair of garbage bags waiting not to fall in.) 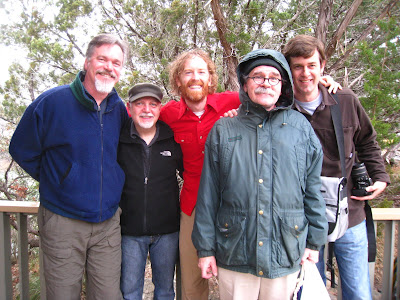 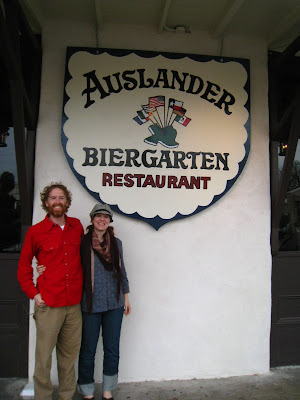 (Phaedra and I stand in front of our lunch of choice in Fredericksburg. We listened to a lot of German folk tunes with Hans and Franz-like voices going Hoo-hoo-hoo and Hop-hop-hop and Wir trinken und wir lachen und alles ist gut, yah, yah, yah.)

(And finally, just a little late-night chillin' with Keaggy.)

Heather said…
Welcome to the dark side (my church is AMiA--Christ Church Plano).
2:07 PM

tamarahillmurphy.com said…
Oh, you're KILLING me with this! Sounds like a wonderful time at the Lodge. Thank you for giving us a peek. I look forward to my own copy of Syllables of Water.
(btw - I'm sort of glad that I can't see the diagram for the fire crapper too well. Hopefully your time on the houseboat was way more romantic than that photo eludes. Pretty hilarious, though!)
10:36 AM

Must have been delightful all the way around.
11:31 AM

w. david o. taylor said…
Heather: well, dark side perhaps, but certainly not boring. I'm new to the communion. For now I'm listening and asking questions. There are, though, men and women in AMIA that I respect and appreciate, so we'll see what happens. Just listened to a great plenary talk given by Todd Hunter (John Wimber protege, North America "Alpha" guy). Very sharp.

Fern: thanks for the typo heads-up.

Tamara: if you click on that first photo it'll enlarge to a size that you can read very carefully how to take care of your #2 needs. :)

Erin: watching Jeff and Phil talk shop with a such fresh sense of excitement and love for the music was indeed a delightful thing.
11:54 AM

Adam said…
sigh... missed it by a week. But we could hear the echoes of golden mouths and golden fingers while we were there...
10:50 AM

David Hyman said…
Great putting two and two together that last day of WC. We'll keep an eye out for you this summer.
6:33 PM

w. david o. taylor said…
Great to see you as well, David. Had a great conversation with Steve B. All Saints sounds like a wonderful church. Phaedra and I will look forward to hanging out at some point the first week of June.
8:12 PM