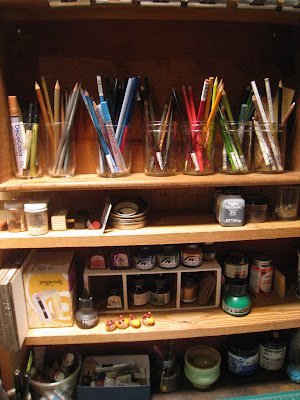 The first thing Phaedra and I talked about when originally introduced was art. My first impression of her was: this girl is an artist. Her first impression of me was: "That guy's old! That's a hick, country guy, and old, old like late 40s. He's the arts pastor?" Before speaking to me she saw me up front giving announcements in this outfit: 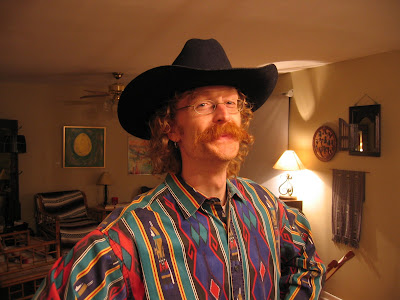 I felt an enchantment with her work. I loved her care for detail. I loved the sense of play and her experiments with alternate fairy worlds. I loved her titles, like "Fritz Realized the Rabbit had him Trapped."

Before she'd even moved down to Austin, before there was any notion of a future friendship, I said: "You should submit something to our next Advent exhibit." And she did, in the winter of 2003. This was it: 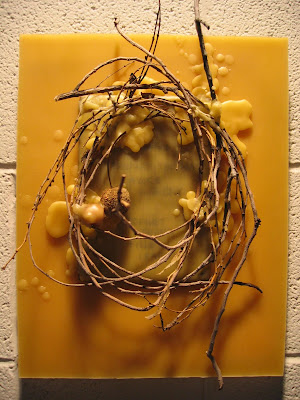 By summer of 2004 she had moved to Austin and, with no little trepidation, had bravely accepted the invitation to become our artist in resident for the year. I was her boss. I was not always a nice boss; but I was a good boss (mostly). I found myself energized by her passion, her sedulous craftsmanship. I sincerely and, with the passing of time, increasingly wanted to help her become all that God had called her to become. I wanted her to succeed greatly and to nourish her mind and imagination and heart with good soil.

And then, yes, I wanted her for myself. So I married her three and a half years later. 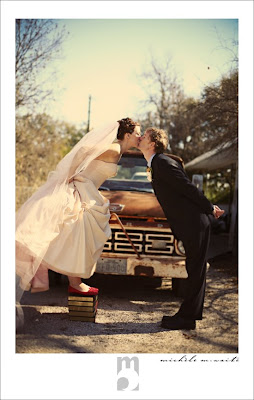 One little story. The stipulation of the residency program was for 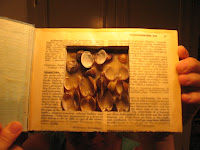 the artist to devote their time and energy to making new work. I needed to see a serious commitment to their artwork. Otherwise they would not be considered. The artist must submit a 1000-word proposal, explaining their intent and a provisional list of goals. I asked them to give me a book list. There was, in addition, a relational and spiritual component to the program because we believed that their development needed to be whole.

And what, pray tell, did Phaedra do for the entirety of the fall of 2004? She made not a lick of art.

What was she doing instead? She was reading books. Oh, ok. She's filling up the resevoir, I thought. That's good. Books are awesome. She's cultivating her imagination. She read Crime & Punishment. She read Nouwen's Clowning in Rome. She read Voicing Today’s Visions: Writings by Contemporary Women Artists, Grimm's Fairy Tales, Walker Percy's Lost in the Cosmos, Ben Shahn's The Shape of Content, Catcher in the Rye, and, my favorite, Running: A Complete Guide. And she read a lot more than that. She read and read and read.

And then I caught her red-handed. In December I said, no more. I forbid you to read another book. You're no longer reading to nourish, you're reading to escape having to make art. You're done. Nope. Not a page more. I'm giving you penance. Your penance is to stay in your studio until you make a new piece of work.

After a bout of grumbling of biblical proportion, she acceded. Days went by. Nothing happened. She despaired, in good artist manner. She worried. She fiddled. And then damn burst. She began making art, well, like a sainted maniac. She created intimate pieces made from old wooden drawers. She printed images of garden creatures. She fretted over perfectly clean lines. She created a massive installation for Easter 2005 that hung over the whole expanse of the sanctuary: 1,100 paper butterflies dipped in bees wax. I was very pleased. There are few things that make me as happy as watching an artist come fully alive.

Now she has her own blog. She told me today that it was not devoted to personal ruminations, "not like yours..." Instead it's a blog that allows her to share the creative dibble-dabble explorations, some humble, some grand.

I know it takes a lot of courage for any artist to share their work with the public, regardless even of how much they have succeeded. So I'm proud of Phaedra for doing it, for putting up her work in public. There's a link on her blog to her flickr account. That'll have the bulk of her work of recent years. Well done, I say, Phaedra Jean, ye Art Machine, who shareth the other side of my bed. I love you. (I know you're in the kitchen right now and I could tell you that in person. But it can't hurt to say it also in print.)

I leave you then with an image of a piece she created for the 2004 Advent exhibit at Hope Chapel. It measures five feet high, eight feet across. The title is "Annunciation Post."

Joshua Banner said…
I love this post...makes me think about encouraging my own creative bed mate.
6:12 PM

Fern said…
wonderful post. i'm not an artist, but am interested in how christians are engaged in modern art and culture.
i stumbled upon your blog while doing a google search for 'toddy burton' (a previous acquaintance, i heard her on kut the other day). what church do you pastor in austin?
1:24 PM

w. david o. taylor said…
Banner: love it. You've got a great bedmate, a poetry machine. But heck, we all need encouragement. So go for it.

Fern: an All Saints gal? Thanks for saying hi. There are a lot of resources offering us a wide array of perspectives on "Christ and culture." You have Fuller seminary's Brehm Center on one coast, and the International Arts Movement on the other. You have Calvin College and Wheaton College in the north, and all of Texas in the south (plus Nashville and Atlanta and those other little villages that surround the Great Republic of Texas and All Its Wisdom). Ok, before I get pillaged, that's a joke. E-humor.

I'm not officially pastoring any more. I resigned from my position at Hope Chapel last June and have been attending Christ Church (Anglican) since then. Phaedra and I are very happy there. We're suckers for the liturgy.

I read some of the poems you posted on your blog. Very nice. For what it's worth, it sounds like a lot of wonderful things are happening in your life.

To no one in particular: Today I had a hard, hard conversation with a close friend. Isn't it fun when that happens?
4:19 PM

w. david o. taylor said…
Oh, one more thing. And now I'm off to my Facebook account for my once-a-month visit. I've got so many people who want to be my friends.