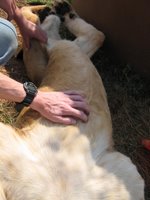 Had a great time this past weekend. The place is amazing. Truly, if you're anywhere within a stone's throw of the Laity Lodge do yourself a favor and go. We had possession of one of the houses (Lodestar), which slept eleven. The cost of the house per weekend night: $100. Ten of us went, that meant we paid $10 buckaroos per night. Full kitchen, fully furnished, deck chairs, endless supply of towels and bedsheets, and a golf cart to take you hither and yon. Plus the camp has two fully equipped art studios, one for 2D, one for 3D; a library; recreational areas; a creek; so on and so forth. It's an incredible gift to fellow believers. It's also a great act of courage for someone to dream it up, pay up, and work, sweat and swear the thing into existence.

Had a great time catching up with Luci Shaw and Eugene Peterson, both of whom I met at Regent College. I also had a convivial exchange with one of my favorite novelists Stephen Lawhead, who wrote a series of epic adventure fantasy books my mother read to us when we were children. His favorite of mine, I think, is Byzantium. A good chat with John Wilson, editor of Books & Culture, whom I will see again at Calvin College's Festival of Faith and Writing at the end of April. But the sweetest gift was a conversation I had with Richard Foster about the whole ecumenical thing, the good, the bad and the nasty migranes of parochialism and exclusivism.

I've felt since high school a calling to the broader body of Christ. As a senior in high school I attended a non-denominational fellowship church on Sunday, a Baptist deal Sunday night, and an Assembly of God youth group Wed night. Then my first year of college in Chicago I attended mostly a Vineyard in Evanston, but occasionally a black church here, a JPUSA there, and a North LaSalle yonder. After my two years of wandering in the far country of doubt my first two years at the University of Texas--no Jesus, no church, no Christianity--I landed at a Bible church, Westlake Bible. Then during my study abroad in Germany I attended a Lutheran church. What's funny was the way they snuck in a little charismatic spice with a once-a-month Friday night charismatic-ish service. Back in Austin I began to sneak over to Hope Chapel for their Saturday night services, while during the "high seasons" I worshiped with folks at St. Matthew's Episcopal. Then lastly in Vancouver I joined Holy Trinity Anglican church, where eventually I became confirmed in the Anglican Church of Canada. The only two denominations I wished I'd had opportunity to camp out in are Presbyterian and Methodist. I content myself with having good friends in both.

In any case I appreciated Richard's observations about his work with the many faces of Protestantism as well as Catholic and Orthodox. At the end of our time I felt a desire to ask him to pray for me. I hesitated because I hate "bothering" people like him who, in a place like the hill country of Texas, probably desperately needed a break from the masses. But I went ahead and asked. I asked because of a sense that I have that some things, spiritually speaking, can only be bestowed upon you by another, whether that's a sense of manhood or womanhood, of a priestly calling, of servanthood, of being an artist who could make work that matters. I'm headed into a meeting the following weekend that will bring together believer artist leaders from the churches and organizations in Austin and I need as much grace as I can get. My heart deeply yearns to be used as a conduit for unity in the church via the arts. Tall order there, but I'd rather fail from taking too big of a risk than from wishing I had. So he prayed for me and it was a sweet prayer.

The one thought I had about this imagination-rich group of people is I hope they figure out a way to invest and release the younger generation of "writers of faith." We need them as elder mothers and fathers in our lives; we need them badly. But they also need us to keep the vim and vigor in them alive.

Naomi Wolf the Feminist Jesus Lady
I don't know what's in the water but the feminists are turning to Jesus. Thanks to Ellen Johnson for the heads-up, I've just read of Naomi Wolf's apparent conversion. Read here for one of the reports. It's crazy, really. Reactions have begun; and again. One moment you think society is going to moral crap, a royal decrepitude, the next radical feminists are getting a come-to-Jesus burn on their soul.

So it makes me think of a project. I think we should form little cohorts around the country. No more than 5-6 per group. We'll call it the Saul's Who Refuse To Prophesy project. Remember that story in 1st Samuel 19, where Saul sends his men to kill David? Two special ops were sent to take him out, but as each arrived the Spirit of the Lord came upon them and they began to prophesy. Irritated at their ineptitude, Saul went himself. "Harrumph!"

"So Saul went to Naioth at Ramah. But the Spirit of God came even upon him, and he walked along prophesying until came to Naioth. He stripped off his robes and also prophesied in Samuel's presence. He lay that way all that day and night" (1st Sam. 19:23-24).

So the idea is this. Pick a famous scholar or artist or politician or social activist and pray for them for one year straight. Every day, every week. Find out everything you can and pray for God's grace and compassion to overwhelm them. Ignore their refusals to love Jesus. Ignore them like the Holy Spirit ignored Saul's bad attitude. Pray, and keep praying. Pray with faith; pray recklessly. Then after the year is done stop. Or do whatever you want after that. You may or may not notice any change. That's fine. But you never know what good will have come to them because of your prayers. And perhaps, like Anne Rice and Naomi Wolf and demented metal-head rockers they will find Jesus, find him in the most unlikely places and means.

Who do I want to pick? Hm. My first pick would be Chaim Potok. But he's dead. That's a stinker.

So I'll pick Paul Thomas Anderson, maker of the movie Magnolia. We need that guy on our team.

(PHOTO: That's my hand scratching the belly of a lion cub in South Africa. I got to lie down with the cubs and felt very prophetic.)

brian said…
I have enjoyed your blog for quite a while now. This post encouraged me to say hi again. I met Stephen Lawhead last year through a mutual friend, and at the Calvin Worship Symposium in January I was able to spend some time with Eugene Peterson. He spoke about heading to Texas in a couple of months and now you're blogging about it. Crazy. Did you get to know Stephen Purcell while you were at Regent? Another friend. Anyway, thanks for your words.
6:52 PM

Elizabeth Smith said…
Gregory & I also have a vision in our hearts the Lord gave us...unity in the Body through the arts and to glorify Him through the gifts He's given us. In Austin for Austin, from Austin through Texas, throughout our nation and eventually to other nations around the world...tall order too!! We too would rather fail from taking too big a risk than from wishing we had. It's a good place to be in hearing & doing God's will for one's life. Spooky good!
8:23 AM