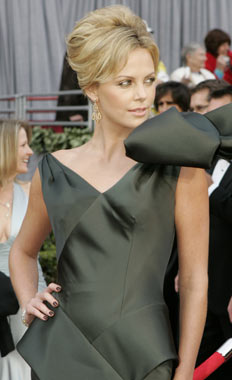 First things first.
Let it be said here and now, officially, for the constitutional good of all Americans: Christians do not have a market on cheese. Cheese is for all. Cheese for everyone. Cheese, alongside religion and personal dignity, is a human right.

What in God's name do you call that slo-mo small-town-Baptist-church-youth-group-cheesy-missions-drama-in-Monterey-Mexico-meets-pantomime-backdrop to the "Crash" song at the Oscars? That was ghastly. I confess I've seen some things performed, moons ago, at Hope Chapel that made me cringe. They were so cringy I had to stay in the foyer behind closed doors, pacing back in forth in twitchy embarrassment, waiting for the conclusion. Truth be told, I've seen video of my own work that produced the same effect. But I can't remember the last time I watched something on television that evoked this hide-me-behind-a-wall cringe shivery thing. I literally had to step into Mike Akel's bathroom for a moment.

Worse, I thought, "Oh great, now what will they think of Americans?" First Iraq, then the Freedom Fries, now this?

That CRASH movie is Leftist Fundamentalist Melodrama
I can't believe they won. It's not like I was rooting for Brokeback Mountain, but on craftsmanship alone BMN romped all over CRASH (hm, pun not intended). As the LA Times film critic Carina Chocano put it, CRASH was a "grim, histrionic experiment in vehicular metaphor slaughter." Case in point, the following line of bad, bad, bad dialogue:

"I think we miss that sense of touch so much, we crash into each other just to feel something."

Ba-dum. That's about as good Omega Code material, maybe a teeny bit worse. Watching the movie, I couldn't escape the feeling that I was an outsider to the ideology inspiring the whole project. What seemed to writer-director Paul Haggis so perfectly justified and passionate, to me looked like a bunch of portentous ironies and contrived coincidences. See here for examples.

As I see it, there is one major problem and one curiosity. The problem is a failure of allusivity. The script, not so much the acting, neither hinted nor suggested nor gave us the possibility of genuine ambiguity. Instead it pummeled us with the believers-only message: I'm a racist, you're a racist, we're all a racist all the time and in the same darn ways. CRASH was no MAGNOLIA , no SHORT CUTS.

What is rattle-the-marbles-in-my-head curious is why. Why did the Academy choose it? The official Tinseltown paper, the LA Times, offers a weird reason. So weird.

My Mother the Saint
Did anyone notice all the "I know my mother's looking down on me right now" remarks in the acceptance speeches? Doesn't it strike you as odd? As perfectly, well, silly? Silly in the sense that it betrays the sentimental belly of American folk religion?

C'mon, who doesn't want to believe his blessed mother is looking down on him with a beatific pleased smile?! Not me. But it says two things about us, us humans: one, we love our mothers like nothing else on planet earth (and no amount of Heather has two daddies will substitute that primal need), and two, we all love heaven. Heaven is the extra credit none of us deserve but secretly wish for.

Heaven is a wonderful place.

According to the proverbial polls, 85% of Americans believe in heaven. 34% of us also believe in UFO's, so, well, there you go, but the point is, of course we want to go to heaven! Of course your mother should be in heaven (your dad's in purgatory).

But what, you get to heaven just because you . . . because what? Because you die? A: How do you know there is a heaven? You don't believe all this Christian fundi mumbo jumbo about Jesus "rising from the dead" (cue Chris Farley's air quotes farce) but you believe in "heaven"? B:What if there isn't a heaven? C: What if your mom is worm food? Have you thought about that? But it's that and "God bless America" that you can say on intergalactic television and all of us, red and blue, Out of Touch Hollywood and Presumably In Touch Middle America will smile pacifically. I mean, even the pimp guys thanked Jesus.

Let me be clear. I'm 100% for mothers. I'm 100% for winning an Oscar. I'm 100% for mothers in heaven approving of their Oscar-worthy sons (it usually is the sons who say such things). But I'm not down with the Readers' Digest crap religion that keeps people's brains soft and vulnerable to the predatory Wormwoods that lurk in our ears and keep us from grabbing hold, bloody-knuckled, of hard things like the cross, the mortification of soul-deadening appetites, or the love of our enemies, who for some people come in the form of their mother. God bless the sons who love their mothers, but heaven's going to be a lot more terrible--a lot more terribly beautiful--than anything our beloved Hollywood producers could ever imagine.

Gay guys are always the funniest.
They are. Andrew Sullivan is proof. But more so is Dave White. Like this:

"A cut to Charlize Theron who has apparently just come from Alabama with a banjo on her shoulder."

"Cut to Morgan Freeman, narrator. Standing behind him is J.Lo. She's busy making people cry. Then she comes out in a stunning dress to introduce whoever it is that wrote that awful “Crash” song. And it's interpretive DANCE!! Slow motion pantomime! Cars burning! Cirque du So-Scared..."

I've been trying to figure this out for the last twenty-four hours and the best I can do is this: the more outsider you are and the greater your suffering, preferably of a corporate nature (so the Jews), the less you have to lose by making fun of yourself, your neighbor, your people and all those other peoples, and so, ergo, the more comedically powerful you are. Thus the nature of all humor.

The question is, God help us, why aren't Christians more funny?

susan biencyzcka said…
David - I love your blog. I hope I keep having time to read it. Almost makes me want to use mine...I may have time for it during a new commute, but this is irrelevant.

I feel a bit more at ease with he fact that I can't help laughing at my gay friends and why can't my christian friends be more fun? thanks for letting in a chink of light on that subject. By the way, I am a big fan of Jon Stewart, and found it hilarious that the movie stars were afraid to laugh at his jokes.
12:49 PM