"An Evangelical Church in the Roman Catholic Tradition" 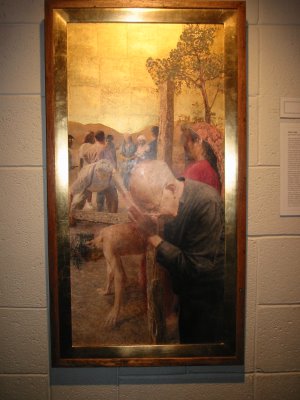 If that sounds like a misnomer or a clever sleight of words, it isn't. It's a church. It's an honest-to-God church located in Inverness, Illinois, a stone's throw from Willow Creek Community Church.

(This is totally reminding me of the GRE. Brrr.)

I first came across a description of the church in an old Catholic Digest (Aug. 2001). It began like this:

"As people flocked to the nondenominational Willow Creek Community Church in the then primarily farmland northwest of Chicago, the Catholic Church took notice, for good reason. Ex-Catholics made up 60 to 75% of its membership. Something desperately wrong had happened during Catholicism’s move from the tightly knit, often ethnic neighborhoods in the heart of Chicago to the suburbs.

In 1984, the archdiocese decided to take a hard look at Willow Creek’s obvious appeal. First came a series of meetings in Catholic homes, then services in a local public high school cafeteria. Finally, after a three-year discernment process, the archdiocese purchased 16 acres of farmland in Inverness, Illinois, and founded a new parish community, Holy Family."

Thus the answer to the pop-quiz: C. It is, then, an odd way to describe themselves--an "Evangelical Church" in the Roman Catholic "tradition" (why not the reverse?)--but perhaps not so odd in the shadow and under the influence of Bill Hybel's seeker-friendly mega-church. Holy Family, by the way, welcomes around 10,000 to its services. So strange bedfellows indeed.

Artistically, they have two interesting programs of note:

1. Art & Environment, which seeks "to inspire the religious imagination of our community for the liturgical seasons through textiles, colors and smell."
2. Living Arts, which invites "interested parishioners gather to pray with, draw out, and develop the liturgical arts, including drama, dance, story, song, and other arts."

Most interesting to me is how Holy Family represents the kind of massive cross-pollination that churches in North America have experienced since the 1960s: Catholics wanting to become Evangelicals and vice-versa, charismatics borrowing from the "traditions" and vice-versa, the seeker-friendly becoming weary of their seekerness and seeking instead a demanding spirituality--and vice-versa.

There's a saying in Spanish that my father throws out every now and then: "De todo hay en la vina del Senor," which roughly translated means, "There's a lot of everything in the vineyard of the Lord." This is surely true of our intra- and inter-Church relations, between Evangelicals, Roman Catholics, Orthodox and beyond. Yet the question is this: How much of the "everything" will we swap back and forth? Obviously we're swapping methods and practicals, but how much of our essential and secondary doctrines will we swap before we no longer recognize our former ourselves? How long will this swapping go on? How will our children's generation decide to relate to each other?

This massive swapping is really a uniquely North American habit. We do it with great ease and alacrity. I wonder though when what is easy to our generation will become hard or inappropriate or radically different to the next two or three generations, in particular as the church becomes more globally cross-pollinated.

(THE PICTURE: "Station IX: Jesus Falls a Third Time," by John Cobb. The painting, in gold egg-tempera, hung at Hope Chapel as a part of the Stations of the Cross exhibit in 2003. John lived most of his life as a Baptist before converting to Catholicism in his forties. He lives as a modern hermit and remains a good friend of our arts community.)

Tk said…
um, maybe we should go have lunch or coffee.
too many things to say in response to this post better discussed rather than "commented."
7:25 AM