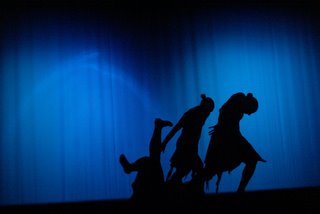 Ever run across a lingering smell in your house? A weird smell. Or a lingering sound at work, a sound you can't track down or wonder whether it's in your head? Yes? No. Well, over the last few years I have kept running across a lingering suspicion that evangelicals, at the end of the day, are not capable, really, of producing great works of art. We can produce amazing spectacles (the Crystal Cathedral), we can create powerful vehicles for evangelism (the Jesus Movie), but we can't --we won't--generate a "classic" work of art. We're just too darn project-driven, word-centric, aesthetically minimalist. With all the souls that need to be won and discipled, who has time to slog through draft after draft, year after year, botched-effort after near-miss in search of great art?

Is it possible for us, as Protestant evangelicals, ever to escape our genetic inclination to protest? Will we always be bound by our innate, historically formed desire to protest "excess": liturgical, practical, artistic? Is a protestor anything richly positive?

More pointedly, I think, the question is this: Do we need to become a different kind of Christian (a Roman Catholic, for example, or a new hybrid species, neither purely Protestant nor purely Catholic) in order to foster an aesthetically rich culture OR Is there inherent in evangelical Protestantism an expression of aesthetically rich Christian faith that has not yet seen the light of day, but with a little more digging would expose a soil, a vein, a deposit of "being" that would make this possible?

My hunch is the latter, but I could be wrong. In the meantime I have set out on a journey to find all the examples I can of excellent artistry made by evangelical Protestants. I'll allow myself to hold a parallel category called theologically orthodox Protestant. That is, I don't know how much C. S. Lewis would have happily described himself as, simply, evangelical. He, along with a few notable contemporaries, probably thought himself in broader terms.

Nonetheless, it will serve my purposes, all things considered, to keep these two categories under one roof. Under other neighborhood roofs I will put liberal Protestants (who do have a thing for great art), Roman Catholics (because of the common tradition they share, not because they all agree on everything), Eastern Orthodox (ditto), and the generally spiritually sensitive person.

My doing this is not motivated by insecurity. I don't feel insecure about the dearth of great--"great"--art in the evangelical community. It's just a fact, not an absolute fact. We're growing, we're changing. We have weaknesses, we have crap, but the same intense energy that was given to missions in the late 19th century is now being given to art, and a lot of it is intelligent, carefully crafted, culturally resonant work. For many years I have respected and loved and learned a tremendous amount from my Catholic brothers and sisters. But I'm not a Catholic wannabe. I'm not an Orthodox wannabe. For the record, I'm a charismatic, high-church Anglican evangelical who feels a humble confidence and childlike excitement about the future of evangelicalism. (At the moment I am a non-practicing high-church Anglican, but that's where my heart lies. Some day . . . some day I'll find that foursome combo.)

With that said, I begin my list with the following examples and welcome any and all additions to the list. My search is for evangelical/orthodox Protestant Christians who have made or are making excellent art. By excellent I mean art that is metaphorically textured, imaginatively rich, and thematically complex, expansive and allusive.

One more note. The list is here is predominantly 20th century and largely of the writerly type. My ignorance of the other media is obvious. I don't know any opera, symphonic or choral types. Also, for example, I'm inclined to include the filmmaker Scott Derrickson in the list, but I don't think he's made a truly excellent film yet. Yet. I would also want to include a heck of a lot of visual artists, many of them friends (e.g. Mike Hill, Ginger Geyer, Mary McCleary, Kathy Brimberry, Anita Horton, Tim High, etc, etc, etc), but perhaps I'm curious to find the most excellent and prominent figures.

[A note on the picture. The photograph is from a "marionette" dance choreographed by Annette Christopher for the 2005 Arts Festival.]

w. david o. taylor said…
After a brisk visit to the gym a revised thought comes to me. By excellent art I also mean art that is broadly recognized by a range of publics and critics beyond the Christian subculture. I also think it counts that the artist has made his or her art for at least 10-20 years. So, for instance, I would include the music group Over The Rhine in this category.
4:26 PM

kelly said…
The new blog looks great! It should be nice not to get spam and pictures will be a great addition.

What are you going to do with the archives from the old blog? Might I suggest you take some of the more formal (essay-like) entries and put them on the essay section of the HopeArts website? Those essays are kind of old.

Just a quick correction: the architect of the Crystal Cathedral, Philip Johnson, was in no way an Evangelical and spent his long (70+ year) career doing showy and trendy but conceptually thin work.

I'm not positive about this, but I think that the architect Fay Jones (http://www.thorncrown.com/architecture.htm) was likely an Evangelical, but I'm not sure enough about it for you to add it to your list.
7:26 PM

Milton said…
Seems to me to be three separate issues:
1. Can a current evangelical produce a great/excellent work of art, and
2. Will the Christian subculture acknowledge and appreciate the art, and
3. Will the wider public and critics acknowledge (appreciation not as important in this group) the art.

Only "meets all three" would hit the home run. But I think it's quite likely that the first possibility (1, but not 2 & 3) occurs but, by definition, we just don't know it yet.

Art news and art history tell very different stories. It only be history that puts together a group of home run hitters for the evangelicals.
12:41 PM

ellen said…
David, this is so great that you can post pictures now.

In music it is not very difficult to find protestant artists. I think that's true throughout our recorded history.

It may ring true that the culture of evangelical protestantism is not yet ripe for recognizing and encouraging great art, but that is true of many cultures throughout history. I'd like to see you give a stab at why certain cultures produced great art in the past.
8:17 PM

noneuclidean said…
I haven't decided for sure, but I'm beginning to think that The Prayers and Tears of Arthur Digby Sellers is an example of good Christian Art, if not perfectly doctrinal. I just finished a post on my blog about them. They are a rock group, one of those branches of art that seems, in my opinion, most sought after by Christians, yet most allusive...and not in the Seerveld sense either.
4:38 PM

Adam said…
Hey David! It's interesting to me that I can think of at least two examples of Mormon art that qualify in these regards: OSC's Ender's Game and the movie Napoleon Dynamite. Evangelical -- yes. Protestant, no. Christian...well, according to them, yes.

Unknown said…
Terence Malick and Andrei Tarkovsky as far as filmmakers go. don't know if they fall under the Evangelical term,,,most people don't know they are Christians. but they are WELL recognized outside the Christian subculture.
6:49 PM