An Art Conference for Pastors (the vision) 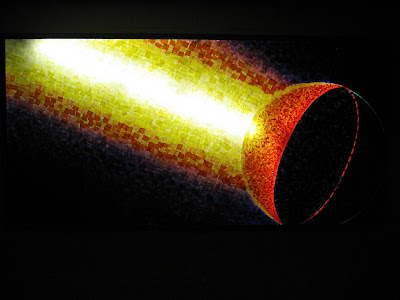 (I have officially begun the planning of this project. God-willing, it will all happen on March 19-21, 2008.)
TRANSFORMING THE CULTURE:
A VISION for the CHURCH and the ARTS
“When TIME magazine compiled a list of the one hundred most significant people in twentieth-century art and entertainment there were only five who had shown any public signs of Christian faith.” ~ Steve Turner, journalist, poet, Imagine: A Vision for Christians in the Arts

THE QUESTIONS
Does it matter how we the Church view the arts? Yes, it does, tremendously. Consider the following:

- “It wasn’t just the biggest tour of the year—it was the biggest tour in history. Who else but the [Rolling] Stones? Nobody, that’s who, and the dark lords of rock & roll could not be stopped, grossing an estimated $437 million to shatter U2’s box-office record.” ~ Rolling Stone Magazine, end of year issue 2006.
- According to the Center for Screen Time Awareness, the number of 30-second commercials that the average child views in one year is 20,000.
That’s a massive power in economic terms. It’s also a massive power that artists wield in the shaping of minds and lives in our society, especially the young ones. We the Church ignore this culture-shaping, heart-transforming power at our own peril.

Does it matter how we treat the artists in our communities? Most artists, in NYC or LA, in Seattle or Austin, want very little if anything to do with the Church. It strikes them more like a rationalist’s university classroom or a pragmatist’s business meeting than like anything resembling the rich world of God’s creation filled with all its supersensory wonder. They look at the Protestant Evangelical church and they see an aesthetically arbitrary arrangement—a fickleness about beauty, an imagination handicapped by Enlightenment presuppositions. Why should artists want to become members of a Church that either ignores, dismisses or rejects their nature and vocation? Yet they too are sheep Christ seeks to bring into his fold.

What about pastors? Pastors are gatekeepers. They let things in, they keep things out; they make things happen or not happen. To inspire a pastor with a vision for aesthetic renewal could open doors not only for new artistic activity in the church—an ecclesia reformata, semper reformanda—but also for the kind of discipleship that artists need to become mature agents of grace in the culture. We cannot ignore the supremely important role that pastors play in the church’s work of cultural renewal.

What about our churches? Churches across North America are experimenting with new forms of gospel-communication: through film and dance, banners and sculpture, ambient music and architectural design. How do we as leaders make wise decisions: how to think artfully; how to employ wisely the different arts into the service of worship without undermining the aims of our worship; how to equip lay persons, businessmen and lawyers, house-keepers and politicians, to come alongside artists in a mutually-enhancing partnership? With much of this experimentation comes a messiness and perhaps even doses of evil. We need great wisdom.

What is the hope? What is the end result? The hope is for an eventual Packer poet laureate and an Amy Carmichael breaking new ground in the field of modern dance. We’re looking at our artists making films for Universal Studios, showing in the vanguard galleries, teaching in the college theater departments. We’re looking at artists sitting on the advisory board of ballet companies. We’re looking at seminaries with programs in aesthetics. We’re looking at a generation of children growing up in our churches getting the kind of nurture which will produce first-rate artists, a Mozart, a Charlotte Bronte, a Picasso.

The hope is for a powerful, grace-filled transformation of the culture.

And that future begins now. It begins with young believer artists like the rocknroller Sufjan Stevens, whose album “Illinois” ranked #9 on Rolling Stone magazine’s Top 50 Albums of 2005:

“I’m interested in reconciling this phenomenal event—the incarnation of God—with Santa Claus and blue-light specials at KMART and the weird preoccupation we have with buying a lot of junk and giving to each other.” (in a recent Rolling Stone mag interview)

WHAT DOES THIS CONFERENCE ENVISION FOR THE CHURCH?
IT ENVISIONS:

1. A corporate worship that is theologically informed, biblically grounded, liturgically sensitive, artistically alive, and aesthetically rich, rich because of its recognition that beauty, the senses, our imaginations and emotions as well as the arts matter greatly in our worship and knowledge of God who himself created these facets of our humanity and called them good.

2. Church leaders who understand the unique make-up of artists and a Church that becomes a haven and home for them; a Church that gives the kind of pastoral care and discipleship that enables them to grow up, mature, and become firmly established in their identity in Christ; a Church that knows how to release her artists into the manifold callings on their lives wherever they may find themselves on the earth that God so loves and fashions artistically.

3. A Church which transforms the culture by way of a redemptive artistry; a Church that sends her artists into the culture to become the incarnational presence of Christ, a presence quietly hidden or powerfully public, holistic, prophetic, winsome and graciously subversive; a Church that releases her artists to create works which expose all the ugliness of sin and entice the human creature towards that ever-expanding beauty of God.

THUS THE FOCI OF THE CONFERENCE ARE THREEFOLD:

1. Plenary #1: Culture and the Arts: art-making as an act of obedience to the creation mandate.

2. Plenary #2: The arts and the corporate worship of the church (liturgical action & space).

3. Plenary #3: The arts and the pastoral care of artists (community & discipleship).

4. Plenary #4: The arts and the renewal of culture (mission & incarnation).

5. Plenary #5: The dangers of artistic activity in the church.

“A case could be made that, ever since the early nineteenth century, if not before, much of the finest art and music of spiritual and theological import—whether popular or highly cultivated—has been created without the Church’s blessing or, indeed, the Church’s knowledge.” ~ Frank Burch Brown, theologian, Good Taste, Bad Taste, and Christian Taste
(Photo: Hope art exhibit, Easter 2004, "The Six Days of Creation," Day 1, 4'X8', tissue paper, metal, plastic, electrical wiring.)

tamarahillmurphy.com said…
I'd like to be the first to sign up! We have had great training on creative services, but not much has been said to the mainstream about intersection of art and theology. I will be praying for you as I am reminded of your work for the conference.

I'd like to post a question, if it is appropriate --
what conclusions have you come to in your own life as an artist and a follower of Christ about the balance of solitude and community? How do I as an artist 'do life' with my church family and still feel free to put up the sign that says, "go away, I'm incubating great ideas!" ?
6:16 PM

Jim Drake said…
Did you do this conference this year? I'd be interested in knowing how it went.

I attended Recreate Conference (www.recreateconference.com) this year in nashville and creating culture where we are as artists was one of the hot topics.

Keep up the good work. I've subscribed to your blog.