The Annunciation: a really weird story


"Waiting--that cold, dry period of life when nothing seems to be enough and something else beckons within us--is the grace that Advent comes to bring. It stands before us, within us, pointing to the star for which the wise ones from the East are only icons of ourselves." -- Joan Chittister, The Liturgical Year: The Spiraling Adventure of the Spiritual Life

I hate to say it, really, but I have become a total scrooge the past several years. Christmas in America makes me irritable.

Everywhere I turn find an impostor holy-day: a pseudo Saint Nicholas, a white baby Jesus, a clinically tame manger, a sentimentalized angelic announcement, cutesy shepherds and reindeer pressed cheek-by-jowl, counterfeit carols, bewitching entreaties to buy more stuff, and the most powerful magical trick of all: that we "just believe." Really? That's it? That's the good news to the factory worker and night shift nurse? That's all that spacewalkers and disturbed teenagers need to do? Regardless of any object of belief?

You see? I'm grumpy. I'm very grumpy, not because of some Orwellian ploy to rob Christmas of its magic (though that's always a viable possibility) but because of a Huxleyan pixy dust (courtesy of civil religion or gringo religion, as you wish) that inoculates us to all the freaky parts of the Christmas story. American Christmas, as, lo, a faint (or is it a feint?) allusion to the Incarnation, is presented, not just by the general media but also regrettably by Christians, as a sweet and safe affair. Yes, there is a sweet tenderness with which Mary loves her child. Yes, that child is the only one who can secure the safety of this cosmos. But the American idea of sweet and safe exists in a galaxy far, far away from a biblical one.

If Christmas is sweet, then it is terribly sweet. If it is safe, then it is weirdly safe. If it is joyful, then it is a strange joy, which may or may not be a welcomed thing, depending on your mood of the day. And it is not just a matter of getting the reason for the season straight. It is a matter of letting the biblical narrative become foreign to us enough to shock us, year in and year out, which is of course the difficult part. It is difficult to keep staring at the same story and to discover new things--new wondrous things, yes, but new bizarre things also, the kind that make you flinch, because there is nothing un-flinchy about the eternal, omnipotent God irrupting in pink-brown human flesh.

At the edge of every part of the Christmas story is a dark shadow. Behind Elizabeth and Zechariah's joy at the birth of their son John is the knowledge that they have lost an inconsolably long number of years to enjoy watching him grow up. (The fact that he dies what we call an "untimely" death only makes the deal more heart-rending. But then again, it was timely, which you can blame God, thank you very much.) At the edge of Gabriel's annunciation is the social stress that Mary would endure in a society where it is all about your embedded role in the community. Lurking over Joseph's shoulder is the gossip that will nag him all his life, that he is merely the putative father of Jesus (not a "real" man, you know). The Magnificat is redolent of theologically and politically destabilizing realities. The shepherds return to their hard scrabble, socially marginalized life.

Angels are decidedly not benign creatures. Their job is to scare the crap out of you so you will listen to whatever they've come to tell you (so try putting that into an Elizabethan or Nashville era song). Herod kills babies because of baby Jesus. The Wise Men give decidedly non-baby-shower-approved gifts.

What is my point with all of this? It is simply perhaps to ask that every time we come around to this season of Christmas we figure out a way to keep fresh the haunting, weird quality of this story and perhaps also that as a community, the body of Christ, we look for ways to bear witness to our status as resident aliens, loving our neighbors with the same sort of love that God loved all the characters who appear on the Judean stage, a real love, a profound love, but also a slightly weird love, if I may keep using that word, which is another way of saying, I guess, that this is precisely what we and the factory worker and night nurse desperately need.

To make a small dent in the mad juggernaut of American Christmas, I am going to meditate on a few annunciation poems this week. Yes, I'm jumbling my holy dates, but that's only to get my head straight.  I am also going to play with Blythe right now, because she's especially good at getting my heart not to be so scroogey. 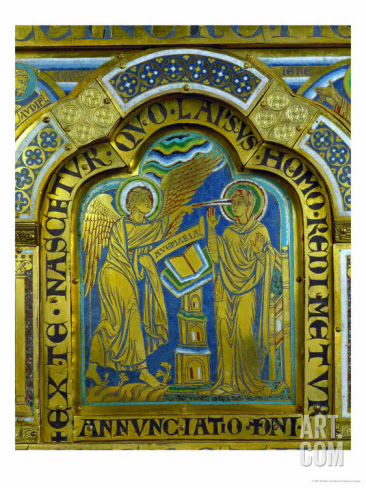 Salvation to all that will is nigh;
That All, which always is all everywhere,
Which cannot sin, and yet all sins must bear,
Which cannot die, yet cannot choose but die,
Lo, faithful virgin, yields Himself to lie
In prison, in thy womb; and though
He there Can take no sin, nor thou give, yet He will wear,
Taken from thence, flesh, which death's force may try.
Ere by the spheres time was created, thou
Wast in His mind, who is thy Son and Brother;
Whom thou conceivst, conceived; yea thou art now
Thy Maker's maker, and thy Father's mother;
Thou hast light in dark, and shutst in little room,
Immensity cloistered in thy dear womb.

Even if I don’t see it again—nor ever feel it
I know it is—and that if once it hailed me
it ever does—
And so it is myself I want to turn in that direction
not as towards a place, but it was a tilting
within myself,
as one turns a mirror to flash the light to where
it isn’t—I was blinded like that—and swam
in what shone at me
only able to endure it by being no one and so
specifically myself I thought I’d die
from being loved like that.

No one’s hangin’ stockin’s up,
No one’s bakin’ pie,
No one’s lookin’ up to see
A new star in the sky.
No one’s talkin’ brotherhood,
No one’s givin’ gifts,
And no one loves a Christmas tree
On March the twenty-fifth.

We see so little, stayed on surfaces,
We calculate the outsides of all things,
Preoccupied with our own purposes
We miss the shimmer of the angels’ wings,
They coruscate around us in their joy
A swirl of wheels and eyes and wings unfurled,
They guard the good we purpose to destroy,
A hidden blaze of glory in God’s world.
But on this day a young girl stopped to see
With open eyes and heart.
She heard the voice;
The promise of His glory yet to be,
As time stood still for her to make a choice;
Gabriel knelt and not a feather stirred,
The Word himself was waiting on her word.


‘Hail, space for the uncontained God’ (From the Agathistos Hymn, Greece, VIc)
We know the scene: the room, variously furnished,
almost always a lectern, a book; always
the tall lily.
Arrived on solemn grandeur of great wings,
the angelic ambassador, standing or hovering,
whom she acknowledges, a guest.
But we are told of meek obedience. No one mentions
courage.
The engendering Spirit
did not enter her without consent.
God waited.
She was free
to accept or to refuse, choice
integral to humanness.
__________________
Aren’t there annunciations
of one sort or another
in most lives?
Some unwillingly
undertake great destinies,
enact them in sullen pride,
uncomprehending.
More often
those moments
when roads of light and storm
open from darkness in a man or woman,
are turned away from
in dread, in a wave of weakness, in despair
and with relief.
Ordinary lives continue.
God does not smite them.
But the gates close, the pathway vanishes.
_________________
She had been a child who played, ate, slept
like any other child – but unlike others,
wept only for pity, laughed
in joy not triumph.
Compassion and intelligence
fused in her, indivisible.
Called to a destiny more momentous
than any in all of Time,
she did not quail,
only asked
a simple, ‘How can this be?’
and gravely, courteously,
took to heart the angel’s reply,
perceiving instantly
the astounding ministry she was offered:
to bear in her womb
Infinite weight and lightness; to carry
in hidden, finite inwardness,
nine months of Eternity; to contain
in slender vase of being,
the sun of power -
in narrow flesh,
the sum of light.
Then bring to birth,
push out into air, a Man-child
needing, like any other,
milk and love -
but who was God.

As artist who believes in Christ, who reigns now (and forever)- who is creative activity,because of His Image I convey-
I give thanks for your observations on the events that now occupy everyones fiber but that of the heart.
May we all be driven to read afresh the amazing deliverance - the salvation He won for us by submitting Himself to the confines of a womb and flesh- slugging through our muck and filth - to bring us to the open arms of Our heavenly Father.

Grace and Peace be in all of our hearts always,

Giving thanks to the Savior for your vocalis..
nicora gangi
www.nicoragangi.com
8:01 PM