A Liturgist's Sense of Humor 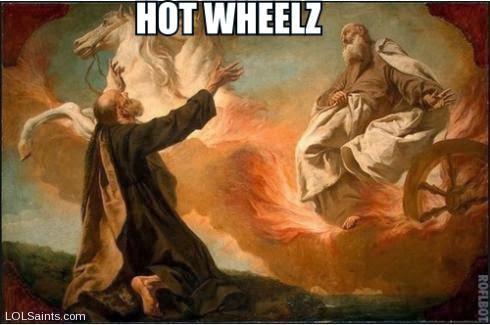 "Seriousness is not a virtue. It would be a heresy, but a much more sensible heresy, to say that seriousness is a vice. It is really a natural trend or lapse into taking one's self gravely, because it is the easiest thing to do. It is much easier to write a good Times leading article than a good joke in Punch. For solemnity flows out of men naturally, but laughter is a leap. It is easy to be heavy: hard to be light. Satan fell by the force of gravity." -- G. K. Chesterton, Orthodoxy

One thing you quickly notice when you enter the field of liturgical studies is that it is a serious business. More accurately, perhaps, it is a field full of rather serious people.

And of course the way we worship God and the reasons we advance for it are serious, which is another way of saying that idolatry, superstition, hypocrisy, flippancy, disobedience, formalism, disrespect and heresy, among other things, are all serious matters. But I also think it is important to stress that there is a good way to be serious and a poor way to be serious.

The poor way either fails to notice all the moments of humor--laughter, levity, festivity, surprise, ecstatic dance, joy, et al--that pop up in the Scriptures or it involves people taking themselves far too seriously, confusing the intensity of their solemnity with the work of the people in public worship which, thank God, does not ultimately hinge on how excellently the people or the worship leaders themselves perform that work but rather on the faithfulness of Christ to be present to his people by the Holy Spirit (and perhaps also on the soundness of the liturgical activities themselves). A poor way being of serious may also involve a person taking God less seriously than they should, becoming instead fussy about "getting it exactly right, every time" or worrying excessively about how they are being perceived by others.

As an aside, I do sometimes wonder if the general aversion to humor in public worship represents at some level a discomfort with our own humanity in this particular space; and if not a discomfort per se, then perhaps a confusion over what precisely it means to be human in the corporate worship. 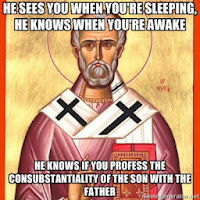 Yes, the fundamental purpose of our gathering in worship is the praise of God and the sanctification of his people. Yes, our public worship begins and ends with God, and it is centered on the work of Christ and the Spirit. And, yes, as far as possible we ought not "to get in the way" of the transaction which takes place between God and his people. Yet it is worth at least asking, What do we mean by "getting in the way"? What do we mean by getting it "right"? What theological notion of transparency are we talking about here? And how much of our humanity can we actually get out of the way? Is not our humanity, as leaders and worshipers, the very place in which God is pleased to meet us? It seems to me, as a first step, that we might do well to distinguish between a "gnostic transparency" and a "human transparency" in the work of worship leading. The former seeks to erase all traces of human personhood, including the quirky and flawed parts (not to be confused with careless or lazy parts), while the latter seeks to retain a careful tension between leading worship in and through our particular humanity, on the one hand, and allowing our particular humanity to accumulate an inordinate center of gravity, on the other.

No easy stuff, of course. And my intent here is only to raise the question, not to resolve it. Much of this issue depends on which part of the worship service we are speaking of (say, the celebration of the Lord's Supper vs. giving the announcements), which may allow for different ways in which we might be humanly present and humanly guiding the people of God in their worship of God. And there are the usual sort of extremes we wish to avoid. A sermon that includes a joke, spontaneous or otherwise, for example, is one thing; a jokey sermon is another. A levity of spirit should not be confused with gauche attempts to be "hip," which as often as not result in cringeworthy moments. I suspect that there is a certain virtue at stake here, which, while guiding all worship leaders, may express itself differently in any given case.

The good way to be serious is, in short, mostly the opposite of the above paragraph, and usually it's a matter of context and timing.

But I'd rather tell you some of the things the mid-twentieth century Swiss Reformed theologian Jean-Jacques von Allmen said in his marvelous book, Worship: Its Theology and Practice. These were things that made me laugh out loud and thank God for people like JJVA who did not take themselves too terribly seriously. They're witty, they're insightful, they're tongue-in-cheek or cheeky, or they're the kind of thing you're glad somebody finally had the courage to say out loud, even if you may not altogether agree with him (which was frequent enough in my case).

Here, then, I offer you a liturgist's sense of humor.

On wine over grape juice and definitely over tea: "And if indeed the argument which asserts that the use of fermented wine is to be avoided so as not to expose ex-alcoholics to temptation, did not spring from an almost blasphemous theological stupidity and a sentimental philanthropy, I should say let them in that case weaken wine with water, so as thus to follow the general tradition of the Church--which can very well take yet another interpretation! In any event we shall do well not to follow the fantastic ordinance of Julich and Berg of 1671: 'Those who by nature find wine so nauseous that they cannot tolerate either its smell or taste, shall receive from the hands of the minister, along with the bread, some drink to which they are accustomed'. Tea, perhaps?" (247)

On what is to be done with the leftover elements of the Lord's Supper: "we shall avoid the profanation committed, I am told, by a pastor of Neuchatel who 'reserves' the species which remain in order to make with them a fondue..." (249).

Or perhaps give it to the birds? "If I may be allowed to say something in confidence here: when I was a pastor my custom was to pour out on the ground near to the church the wine which remained in the chalice, and as for the bread, I used to give a slice to each of my children to crumble up, and then one of them would give it to the wild birds--not to the hens I used to keep!--with a prayer for them."

Commending certain sorts of corporate music but not others: "the Huguenot psalm, the Lutheran chorale, to which I would like to add those Jordanian melodies (Jordanian in the theological sense) known as negro spirituals ("I've got a home on the other side"): but to which I would not like to add those Anglo-Saxon revivalist hymns which, all in all, are a betrayal of the cultural responsibilities of Christian worship" (91).

On semi-circular seating arrangements: "It has often been thought desirable, especially among Reformed Christians, that a church should symbolize the truth that where two or three are gathered together in the name of Christ, he is there in the midst of them. Hence the faithful are grouped around what?--the pulpit? the holy table?--like scouts around a camp fire, or like an audience round a theatre stage, or like medical students around a dissecting table" (255).

On Zwingli the performance actor: "There is an anecdote--perhaps invented later?--according to which Zwingli, to show the absurdity of chanted prayers, went to sing to the political authorities of Zürich his petition that the chanted liturgy should be abolished in favour of a spoken one" (92).

Baptism à la mode: "For this reason we must be relentless towards 'aesthetic embellishments' whether they be interludes of music or singing, or baroque architecture, or a rhetoric which is self-complacent, or a bombastic redundancy in the formulation of the prayers or--horribile dictu!--the way in which, I am told, fashionable baptisms are administered in some Presbyterian churches in the U.S.A. where the pastor baptizes the child by letting water drop on to its head from roses that have been previously dipped into the font" (103).

No flowers on top the Communion table, please: "Two things in particular have no place there: bouquets of flowers which transform the holy table into an occasional table proper to a drawing room..." (259).

On extemporaneous prayer for all! "As a rule [the pastor] will adhere to the prayers prescribed in the liturgical traditions of the Church--unless he wishes ... to introduce into the cult moments of free prayer; for if he wishes to say publicly his own prayers rather than those of the Church, he has no right to prevent the congregation from saying theirs also publicly" (105).

Not everyone can be JSB: "In regard to organs we are somewhat doubtful because of the arrogant demands of organists, and the foolish pretensions of the parishioners, the result of which is that vast sums of money are swallowed up, out of all proportion to the real contribution made by the organ. In any case, the beauty or even the mere decency of the church, the liturgical furnishings and equipment, the ornaments, are infinitely more important than the claims and pretensions of a performer on the organ who imagines himself to be a John Sebastian Bach" (263).

Funky before his time: "We entirely disregard the truth that worship is at the same time 'mass' and 'eucharist', both a sending forth from and a coming home to the source of power, if we think of worship as being, not a place of legitimate repose, the supernatural spot where the eschatological ANAPAUSIS is already evident, but, if I may dare to use the expression--a funk hole!" (120).

Liturgical clothes make the man: "According to ancient sentiment, which lasted until the eighteenth century, garments do not cloak their wearers in anonymity; on the contrary they serve to reveal the personality of him who wears them, as is suggested by that wise dictum of Georges Louis Leclerc, Count of Buffon: "A sensible man should regard his dress as part of himself, since in the eyes of others it is an essential element of his personality, and contributes to the total idea that is formed of him" (271).

Zwingli the Orthodox kisser: "If it would be difficult in our confession to adopt something like the Gospel procession of the Orthodox Church, and even seems impossible to restore the kiss given by the reader to the Gospel book-a kiss which was maintained by Zwingli, on whom liturgiologists have been unduly severe--it is perfectly possible to ask the people to stand for the reading of the words of Christ" (135).

On protestant mania: "it is needless to indulge in the protestant mania for remarks before or after each reading" (137). It is also unnecessary "to camouflage the bereft state of the holy table by placing on it, in majestic display, an eighteenth-century Bible which is quite unusable."

On the church's double openness, to heaven and to the world, like a can of condensed milk: "if [the church] is open to the world through its apostolic ministry, it is open to heaven through its liturgical ministry. It is only because of this dual opening that there can come from it something orientated towards the world, namely the Gospel, and something orientated towards heaven, namely thanksgiving and intercession. In fact, if I may be so bold as to use the metaphor, it is like a tin of condensed milk: if you wish to make it flow, you must pierce two holes" (154). 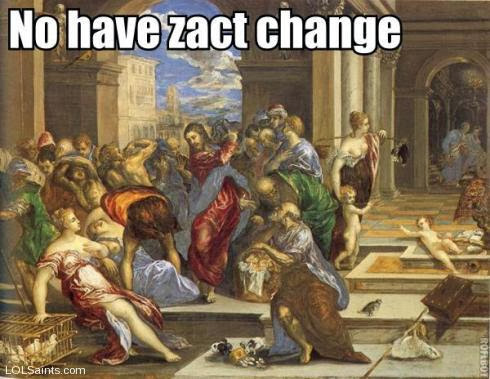 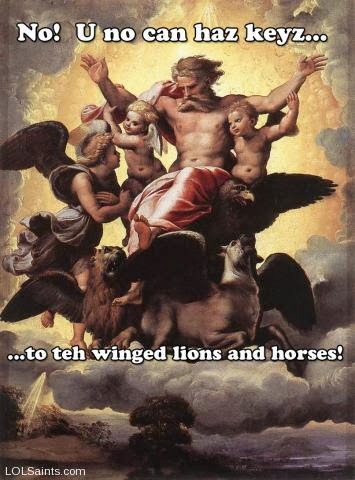