On the vocation of an artist: Part I 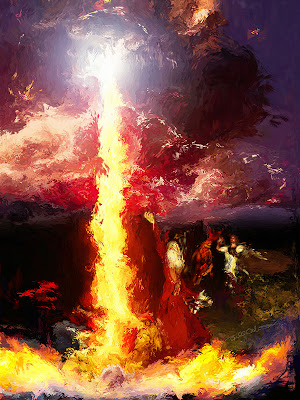 
For an artist to choose to enter seriously into her calling is to enter into a very confused world. In the world at large, beyond the walls of Christendom, one encounters a babel of opinions.

Matthew Fox, for example, the defrocked Dominican priest and author of the popular book Original Blessing, once argued that an artist is “a co-creator who births the mystic self or allows it to be born.” On this understanding a "cosmic christ" (lower case c) invites the artist to "give birth" to herself through new imagery by means of an innate capacity for transcendence. While the theology is questionable at best, this is the kind of counsel that in fact leaves artists more frustrated than freed because too much, rather than too little, is being asked of her on this kind of view of artmaking.

The auteur filmmaker David Cronenberg, author of cult favorites such as The Fly and Videodrome as well as the mesmerizing one-two punch of A History of Violence and Eastern Promises, offers this off-the-cuff resume for his vocation: "At the time you’re being an artist, you’re not a citizen. You have, in fact, no social responsibility whatsoever." This echoes at some level, even if hyperbolically, the advice that Jacob Khan gives the young Asher Lev, in My Name is Asher Lev:

“Listen to me, Asher Lev. As an artist you are responsible to no one and to nothing, except to yourself and to the truth as you see it. Do you understand? An artist is responsible to his art. Anything else is propaganda. Anything else is what the Communists in Russia call art. I will teach you responsibility to art. Let your Ladover Hasidism teach you responsibility to Jews. Do you understand?”

While this novel is on my all-time top ten novel list, I'm afraid that I cannot agree with the counsel given, though I'm acutely aware of the kinds of reasons that motivate the character (and perhaps Potok too) for giving it.

Adam Gopnik, in an article for The New Yorker, hints at the kind of calling that many artists in the contemporary art scene perceive for themselves when he writes,  “Post-modernist art is, above all, post-audience art.” It is art, that is, that nearly exclusively disregards the needs of the audience in favor of the artist’s needs. While this of course does not describe all contemporary artists, it does describe enough of them to warrant a measure of concern or at least a reassessment of what is at stake in society’s experience of such art—as well as society’s responsibility to the artist.

“It’s self-explanatory, isn’t it?  Rock’n’roll, by definition, is against Thatcherism.  And if it isn’t, it’s not rock’n’roll. . . . I’d say rock’n’roll should always be anti-establishment—whatever the establishment is.”

This sentiment is shared far and wide. Shifting to a more popular context, Adam Lambert, the 2009 American Idol runner-up, states bluntly: “I’m not a baby sitter. I’m a performer.” By that I gather that he means that his primary responsibility is to his art, not to his audience’s needs, fears, wants, pleas or protests. Strangely enough, Flannery O’Connor said something very similar; and one might be tempted to think that O’Connor and Lambert are working out of the same playbook. They’re not. O’Connor says it much more subtly (see section 5 in Mystery and Manners), though no less bluntly.

It's the distinction between wanting two spheres either separated or differentiated. Where Lambert and company want the former, O'Connor and saner heads plea for the latter, often, and rightly so, against the naive wishes of fellow Christians. Where O'Connor envisions a symbiotic relationship between artists and pastors, or the community of artists and the church, Lambert lacks an equivalent social institution to partner with on behalf of the good of society.

Lady Gaga, the sartorially hyper-imaginative alter ego of Stefani Joanne Angelina Germanotta, continuing the theme of separable spheres, perceives her task as an artist this way:

“We are nothing without our image. Without our projection. Without the spiritual hologram of who we percieve ourselves to be or rather to become, in the future.  When you are lonely, I will be lonely too. And this is the fame.” 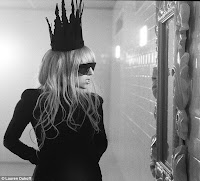 This is said by the woman who, at last count, has amounted  52,049,063 “friends” on Facebook. While taking her comments with a large pinch of poetic salt, Lady Gaga epitomizes the artistic practice of generating two versions of oneself: the person and the persona. At a relatively benign level, this has included the historical habit of picking a pseudonym for public representation. Samuel Clemens chose Mark Twain. Mary Anne Evans adopted the pen name George Eliot. Robert Matthew van Winkle took the infamous nickname Vanilla Ice, while Paul David Hewson sounds much cooler as Bono than, well, Paul David Hewson. At a more hazardous level, artists like Lady Gaga lose the capacity to be their "regular" selves in public and resort to elaborate and often expensive means to hide behind the public image. It begs the question: What does it mean for an artist to be at home with herself and with others?

Finally, David Morgan, professor of religion at Duke, describes one branch of contemporary philosophical aesthetics in strong language, when he states (rather than spews) that, for this party, the arts are “ideological constructs that serve the privileged in human society.  Beauty, ugliness, truth, value, authority—all are constructed by the class, race, gender, or state that seeks to enforce its dominance.” True in some cases, perhaps not in all cases, and perhaps not as simply as that. But still, it is worth a friendly reminder, especially when we recall the attitudes of Madison Avenue and of 18th century missionaries to Africa who brusquely imposed organs and hymnals upon people groups whose musical forms were regarded as liturgically “lesser,” if not perverse.

I could go on. But you get the point.

When you enter into discussion with fellow Christians, the situation unfortunately isn’t much better...especially when we encounter the all-too-ready appeal to the notion of artist as prophet (per our nifty representation above).

Cherry Moore said…
So...I did as you suggested and wrote my answer first. I said "to see beyond the surface of things and record what she sees." I started to say "to show others what she sees" but that brings up the whole audience/viewer thing. Somehow for me that's separate. What the viewer sees is theirs not mine.

I don't think art HAS to be anti-establishment and I would hate to think it is always "an ideological construct serving the privileged class" although that idea sometimes clouds my way.

Unknown said…
You consistently give me thoughts to chew on... thank you. Good word.
2:49 PM

tamarahillmurphy.com said…
Just wanted you to know I'm still reading and listening and pondering. I'm looking forward to hearing your response to the Church's view of artist as prophet.
3:17 PM

Cole Matson said…
David, this is an excellent post, and exactly in line with my doctoral work. I'm looking forward to how you comment on "artist as prophet".

It seems to me that the vocation of "artist" and the vocation of "prophet" easily overlap (though they are not the same - I really appreciated your distinction of "separation" vs. "differentiation"). "Artist as prophet" can work if the artist remembers that the prophet:

1) speaks the word of God, not his own word

3) speaks the word of God to the community for the benefit of that community (e.g., to encourage them to repentance)

1) the artist speaks his own word (his own artistic vision)

2) the artist *must* be on the outside of the community, and must reject the community's values (e.g., the Brennan "anti-establishment" quote)

Drama professor Scott Walters (UNC-Asheville) has an excellent post on the relationship between the artist and community and the role of offense: http://theatreideas.blogspot.co.uk/2009/04/offending-audience.html.
5:08 AM

Cole: loved reading your reflection on the topic. I'll certainly look forward to reading the longer version. I'm devoting an entire blog entry to the idea of artist as prophet (it'll probably part #3) and would welcome your feedback. You've already identified some of my concerns and qualifications to the idea, and I'm keen to read what Scott Walters has written on the relation between artist and community. Keep up the good work!
10:13 AM

Anne Marie Beard said…
I actually don't get the point. Was there a point? Other than presenting some ideas of what "art is" I didn't see an argument, theme, or anything other than a meandering essay.

My sister has invited me to hear you speak in a few weeks - and I am not sure - as an artist, and a Christian - it makes me uncomfortable to see the "Church" as the wellspring of artistic expression - it was art's greatest accomplishment to break free from the constraints of the Church. How could one possibly have full freedom of expression if being "watched" by the Church???
4:37 PM

Arts & Faith said…
CIVA (Christians in the Visual Arts) devoted an issue of its journal, SEEN, to the topic of "Vocation and the Artist" (2008).

w. david o. taylor said…
Anne Marie, thanks for stopping by and taking a moment to share your thoughts. You're right in pointing out that there isn't an argument in this blog entry. It's part one of a five-part blog series and hopefully the "argument" will be easily discernible over the course of the series, if not by the end of it.

As I read history I would agree with you that there was something good that resulted when art was able to explore interests beyond the aegis of the church, or of the royal courts or privileged classes for that matter. At the same time, the notion of the artist as self-determined by her own self-expression is a relatively new idea historically and one that would represent a minority perspective in global cultures (outside of western influence, that is).

Many artists, of course, see this new turn as a great thing. Others see it as problematic, and my hope is to explore some of these issues both in this series of blog entries as well as, in part, in my talks in Austin.

If you're around and having nothing else to do, please do stop by. I'm a big fan of Austin and a big fan of artists in Austin, so it'd be nice to meet you and hear what you're up to.

India said…
Hi -- what New Yorker article are you quoting Gopnik from? I came across that quote in Art & Fear and have been looking for Gopnik's article without success.
8:56 AM

w. david o. taylor said…
India, I believe I found that quote in "Art & Fear," like you did. I'm sure you could email Gopnik directly and ask him yourself: http://www.newyorker.com/contributors/adam-gopnik. Or direct message him on twitter: @adamgopnik.
9:41 AM