The Conditions for the "Successful" Formation of Worship Art 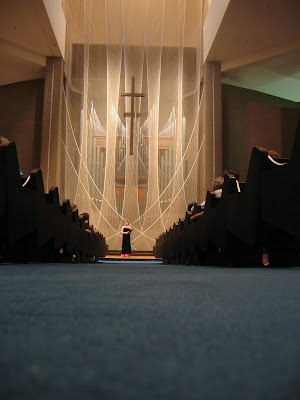 Ever wonder whether a particular work of worship art, whether musical or visual or poetic or otherwise, is forming a congregation in the way "that it's supposed to"? Ever wonder what it is forming in them? Is it forming them theologically, spiritually, relationally, emotionally or missionally--or in a combination of these and more besides? How would you determine whether it formed the people rightly or fully? What conditions would need to be considered in order to determine an answer to these questions?

Over the past year I've created a handout in order to explore these questions. I've handed it out at various conference in which I've spoken. I thought I'd go ahead and share it here. This will be part one of two entries. Feel free to use it in your own church setting. Whether it's as a pastoral staff or worship team or arts committee, these are the kinds of questions that are useful to ask in order to assess the complex fashion in which the worship arts form a given congregation.

For what it's worth I use the terms "worship" and "liturgy" to mean exactly the same thing in this entry.

A diagnostic to discern how the worship arts form us
While the arts in the context of corporate worship form us “in their own way,” they should not form us “on their own terms.” They should always form us on the terms of the worship service; or to use Wolterstorff's language, they should always serve the particular purposes and activities of the liturgy. The logic of art must always be seen to serve the logic of the liturgy.

Beyond this, we can say that the worship arts do not rightly form us in any kind of isolated or automatic way. For right formation to take place, the worship arts need to be intentionally integrated into the larger parts of the church's life, and they must be allowed to form dispositions in the congregation over time.

How would we discern whether any given work of liturgical art formed a congregation rightly, that is, according to the purposes for which it was created and to the context in which it is employed? Bearing in mind that we can never fully quantify the work of the Spirit and that our formation often happens unevenly, eight factors can be considered significant here. 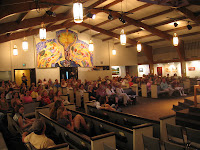 Chronologically: At what point in the order of service might the visual art become especially useful? Do banners process? Does an ornate wooden cross recess? Is an icon paraded around the congregation for worshipers to kiss? Does a stained glass window or a group of photographs await the congregants as they leave the building? Is the space left “artistically bare” on purpose?

2. Its use. I can imagine, for starters, four kinds of uses for liturgical art: didactic, performative, “service” and contemplative. If the stained glass windows along the nave of the church are intended to instruct the congregation, what kind of instruction is intended? If a dance is performed prior to the Eucharist, what performative value is sought here—as a celebrative act or a prayerful one or an act intended to symbolize the movement of the people before God? 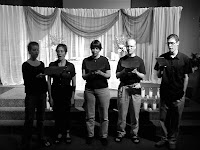 Some kinds of music are called “service music,” whose purpose is musically to enhance different parts of the service. In an Anglican church I once attended in Vancouver, the music director ended the evening service with around five minutes of music, played either on the piano or the organ. The congregation was expected to sit and listen. The purpose was not to attend to the music as such but rather to create a contemplative space within which a person might prayerfully absorb the contents of the entire service.

3. Its content. Is the art traditional or contemporary? Is it, say, a William Cowper hymn or a Chris Tomlin psalm? Is it a familiar song or an unfamiliar one, and how often is the congregation exposed to unfamiliar content? Is the song sung in the indigenous tongue or a foreign tongue—English, Latin, Swahili, Spanish? Is the music aesthetically difficult, as with the compositions of Orlando Gibbons, or is it aesthetically simple, as with the modern hymns of Keith and Kristyn Getty? 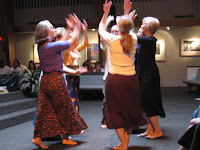 Tim Stewart said…
I love that three of your illustrative photographs are scenes of liturgical life at Hope Chapel.

w. david o. taylor said…
Tim, I'll be forever grateful to HC for what they allowed during my time there. For sure.

cardiphonia said…
Thanks David. This is really interesting. You've literally broken down worship-arts formation into its constituent parts. (i had the initial feeling of staring at an engine laid out to be rebuilt) Hoping you will put it all back together for me in part two!
6:21 AM