Charlie Peacock: the piano man who is definitely not a muppet but who will be speaking at our retreat 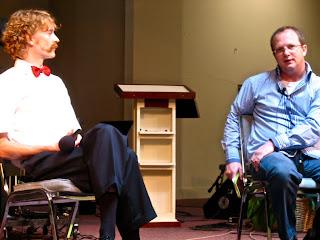 "All Art House programs promote community, life, and world engagement, helping students become more and more interested in the same things that Jesus is interested in." -- Charlie and Andi 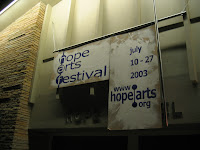 The fact is, I first encountered Charlie in the late 1980s. He was much younger then. I was a teenager. This was the time when he co-wrote with folks like Margaret Becker and produced music for The Choir, Twila Paris, Al Green and the just-about-to-be-controversial Amy Grant. (Today he produces work for, oh, small outfits like Switchfoot and The Civil Wars.) It was the heyday for CCM and I drank it down in stacks of cassette tapes. It was also the heyday for rolling up your stonewashed jeans so they fit like a cork screw around your ankles. Charlie was a hero. The fact that he was sitting in a chair across from me in the sanctuary at Hope Chapel was almost too good to be true.

For the record, that was also the summer that Josh Banner met Susanna Childress.


It was a very good summer, I confess.

What I love and admire about Charlie and his wife, Andi, is their commitment to seek the wellbeing of artists, their whole wellbeing. Never afraid to take risks, they founded Art House America in 1991. For twenty years AHA has invested in the lives of artists with a vision that is so compelling I'm tempted to jealousy, wishing I could do pretty much the same thing.

"Art House America was founded with the vision of nurturing creative artists and anyone looking to explore an artful, faithful life. In addition to promoting the seamless life of Christian discipleship and imaginative living, AHA also provides students with creative nurture, hospitality, and access to sound and exemplary vocational and spiritual counsel. AHA provides mentoring for artists of various art forms, resources that communicate the worth and necessity of all vocations (paid and unpaid)...."

Isn't that good? I think it is. And if one is tempted to think that Charlie and Andi have lived an idyllic life, they will probably be the first to share frankly their many experiences of heartache. 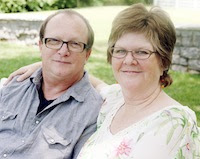 What do they have to offer our Laity Lodge retreat? Years of faithful though not un-costly service, insight into the lives of artists, from Bono to singer-songwriters trying to make a go of their craft (like our favorite Brooke Waggoner), a winsome, unassuming personal aspect, the pursuit of an intelligent approach to art and faith, stories of failure that instead of leading to an embittered cynicism have made them more compassionate to others, and a commitment as a couple to partner together even while respecting each other's distinct calling and gifts.

They'll be a part of our retreat at the Laity Lodge, March 1-4. Why not join us and get an opportunity to know them a bit? See here for all relevant information on the retreat. 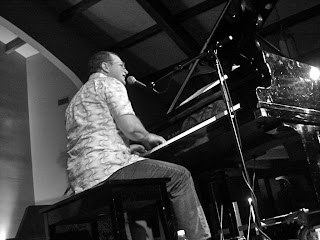 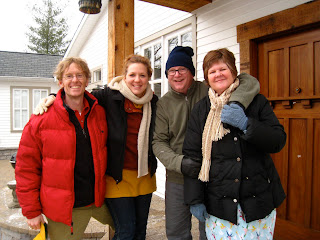 Here is the full meal deal bio note for Charlie.


Charlie is the founder of the label re:think/EMI and former Sr. A&R consultant to Sony/ATV and EMI CMG. Named by Billboard's Encyclopedia of Record Producers as one of the 500 most important record producers in music history, the Grammy Award-winning producer has over 20 Million sales to his credit with a diverse roster of artists ranging from Al Green to Ladysmith Black Mambazo and Switchfoot.  Peacock’s director/producer credits include Any Day Now, Ten Out Of Tenn’s award-winning performance documentary feature, Brooke Waggoner's concert DVD And The World Opened Up, and The Legend Hank Cochran, a documentary tribute in collaboration with BMI and Sony/ATV featuring legendary songwriter Hank Cochran (Patsy Cline, Elvis Presley) and his famous friends: Merle Haggard, Jamey Johnson, Lee Ann Womack, Elvis Costello, Cowboy Jack Clement and others.


Peacock recently scored original music for the upcoming film Searching For Sonny starring Minka Kelly and the documentary Wrestling for Jesus; and contributed music to Nicole Kidman’s Rabbit Hole, Vampire Diaries, Pretty Little Liars, and the NBC Family Movie Night telefilm franchise soundtracks for The Jensen Project, A Walk In My Shoes, and Change of Plans in association with producer Randy Jackson. Charlie and his wife, Andi Ashworth, are Co-Founders/Executive Directors of Art House America.