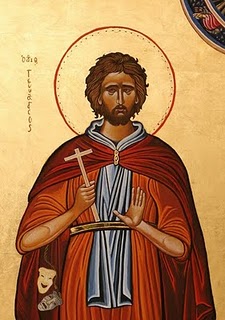 "We could attend our neighborhood church to be soothed in the knowledge that all was well as our tour guide slipped into leotards to dance, yet again, an interpretation of the Twenty-third Psalm." -- A.K., monk of the Archabbey of St. Meinrad

I've been reading, and relishing, Aidan Kavanagh's On Liturgical Theology. Not only is it a masterful work of theological erudition, it is also beautifully and wittily written. One certainly wishes more books like this were written. Then again that would be to wish that we were all extraordinarily gifted. We're not, though there is something to be said for giving it a try.

(See video below for an extraordinary sample of thespian skill.)

A passage I read this morning from Kavanagh reminds me of something Jennifer Herdt said in her book, Putting on Virtue. Arguing against an "inspirationalist" view of discipleship, which believes we become Christ's disciples by waiting for the right inspiration or experience to cross our paths, Herdt encourages us to pay attention to the practices of an actor.

The goal of the Christian, she writes, as with the actor too, is not to be original but to be rightly imitative. Sam Wells, arguing a similar line in his slim but punchy volume, Improvisation: The Drama of Christian Ethics, says our job as disciples of Jesus is to be less original than obvious. As he puts it: "Free from the paralysis of being original, the pressure to be clever, the fear of the unconscious, and the demand to be solemn," Christians, under the tutelage of Scripture, can learn how "to take the right things for granted" (69).

The reason we play the role of Christ, whether in corporate worship or in our life at large, then, is so that we might play ourselves into the role of Christ. The reason we engage in regular practices that cultivate the life of Christ is a way for us to recognize that divine grace is mediated through “ordinary” means, not despite them. And the reason we “put on” exempla--whether St. Paul or Amy Carmichael or St. Francis or Jim Elliot or Dorothy Day--is because we believe that, as with Saint Genesius (3rd century AD), when we "put on" virtuous saints, there is a good chance that by the Spirit we might also become a virtuous saint.

“In that ultimate sense virtue is imitative rather than original, while nevertheless being reflective of the distinctiveness of each individual character and each particular social and historical context—at the same time mimetic and authentic” (344).

Kavanagh comes along and says: pay attention to what you do in corporate worship. Everything that takes place in our public liturgies, from beginning to end, from front to back, from top to bottom, should be in the business of forming us into the trinitarian image of God.

Of all the juicy fruit he drops along this vein, here is one of my favorite:

"The liturgy does not analyze, explain, propound propositions, or polemicize. It does not attempt to educate in a didactic manner or to be commended in a public relations manner. It supports, forms, and nurtures by engaging people in communal acts within which the whole of rite as I have described it comes into motion. The liturgy cracks open radical values, invites without coercing people into them, and celebrates their living presence deep within these same values.... Thus the liturgy does not merely talk about God, but manifests the assembly's graced union with Father, through Son, in Spirit" (115).

It goes without saying that this is a description of the liturgy at its best (at our best too). He continues:

"When the liturgy moves or is moved from being of God to being about God, that is, when it shifts toward being some form of education done in a doxological context for ideological ends, then significant mutations begin to occur. Concepts become more precise, the assembly more passive, ministries more learned, sermons more erudite, and pews fixed. Texts proliferate, the sonic arts of liturgical oratory and the kinetic arts of ceremony fade, and people find themselves in church to receive a message rather than to do, somehow, the World according to divine pleasure....

Christianity becomes one telegram of consolation among others rather than a sustained experience of the presence of the living God, an experience which is itself the corporate message a liberated People proclaim in a world snared in thickets of its own making" (116).

In honor of this idea that, in corporate worship, we put on the whole of Christ with the whole of our person in the whole context of the people of God, I share with you this clever video. Here is a man who knows how to put it on. I watched it three times in a row just to savor the little moments of brilliance. (Thanks to Father Steve Breedlove for passing it along.)

cardiphonia said…
thanks david, for the wonderful post and the spurring on to finish Kavanagh's On Liturgical Theology
3:14 PM

Kathryn said…
Great book recommendation...even those quotes give me something to think about for days....can't wait to read the book! And the video! Shockingly amazing! What inredible talent.
8:01 AM

Dave said…
I'm fascinated by the theo-dramatic context in which you place this. Stating that our roles as performers of Christ does not involve being original but "rightly imitative" causes me to push back in defense of originatlity and creativity at first blush. However, I think that this statement rightly places the Divine script-writer in the position which He rightly occupies.

Great thoughts. Thanks for posting.
8:49 AM

Dave: as you probably already know, the word "original" isn't exactly self-evident. Does "original" mean *sui generis*? Does it mean unique? Does it mean fresh? Does it come laden with notions hubris?

It strikes me that nothing in this world is original without having some vital, organic connection to already existing things. Lady Gaga dresses in an original fashion. But if you scratch the surface, you'll find a host of influences in her style. The actor Kenneth Branagh invests Hamlet with an original interpretation, yet dramaturges could likely trace the sources that shape that interpretation. A variety of tomato may be original but always in relation to existing tomato varieties.

So on and so forth.

I think what Sam Wells is trying to address is a dysfunctional view of acting and of discipleship. By association, he's critiquing popularly held ideas about innovation, ideas that tend to be destructive not only of creative activity but also of human flourishing.

Obviously a blog entry can only do so much, but I appreciate the push back.
10:40 AM

ceciliabrie said…
We have a patron saint?!? of Actors?!? How happy...

Afriend of Ed's posted Jimpressions, too, and i have been delighting in his excellent skill...although i expected that your reference to Shakespeare was going to be to point out that his stories weren't originals but rather his own interpretation and mishmash of history/myth/legend imbuing them with life that would speak to his time (and obviously all time).

This also relates to an essay i'm mulling over in my brain regarding a discussion(gentle debate)I've had with Carey W. about the culture-influencing value of "generative" versus "interpretive" art--and whether certain disciplines are inherently one or the other.
6:24 PM

w. david o. taylor said…
Brie, thanks for your comments and please do write that essay.