The Rule of Storytellers 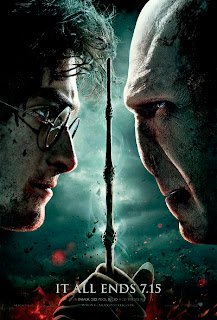 "When you can state the theme of a story, when you can separate it from the story itself, then you can be sure the story is not a very good one. The meaning of a story has to be embodied in it. . . . A story that is any good can't be reduced, it can only be expanded. A story is good when you continue to see more and more in it, and when it continues to escape you." -- Flannery O'Connor, Mystery and Manners

IN THE BEGINNING
If Plato was right, that those who tell the stories rule society, then J. K. Rowling deserves more than an Order of the British Empire. She deserves a small country. To rule. Benevolently. 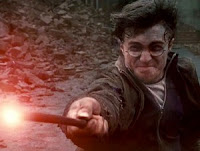 In the spring of 1990 Rowling began to write a little story. That little story was completed six years later, and she would follow that by writing six more little stories. (The last little story, which some thought long, was half as long as Tolstoy's War and Peace and Ayn Rand's Atlas Shrugged, so it really wasn't that long and most of us didn't mind either.)

Eventually her little story would be translated into 67 languages, including Khmer and Ancient Greek. Her little stories have sold 450,000,000 thus far, and if the experts are right that her protagonist will achieve the eternal fame of Winnie the Pooh and Mickey Mouse, then our children's children will quadruple that number.

One day her little stories were made into movies. So far, and we've still a stretch to go, her movie stories have grossed approximately $6,459,205,142. It appears that the words "millions"and "billions" most accurately characterize the effect that her stories have on those who experience them.

If we add the tie-in merchandise, then her little stories are worth a solid US$15 billion, which roughly equals the GDP of Honduras according to the International Monetary Fund.

Universal Studios Orlando decided to create a theme park so that all human beings could experience Ms. Rowling's little stories for themselves, could exist inside of them, could indwell their favorite characters.

"Muggle" made it into the Oxford English Dictionary, to the delight of many.

For the release of Goblet of Fire, FedEx used 9,000 trucks with no other purpose than to deliver the book.

Eight video games in addition to Cluedo, Scene it? and Lego Harry Potter have been created to entertain adults and kids from dawn to dusk.

A few devoted followers of the little stories created a convention called LeakyCon. Included in its efforts is The Harry Potter Alliance which raised more than $123,000 for the people of Haiti in the aftermath of the earthquake. The Alliance has also donated 88,000 books to kids in underprivileged countries.

This is all because they read and believed in the story of Harry Potter.

The literary critic A. N. Wilson praised Ms. Rowling's stories in The Times, stating: "There are not many writers who have JK’s Dickensian ability to make us turn the pages, to weep—openly, with tears splashing—and a few pages later to laugh, at invariably good jokes ... We have lived through a decade in which we have followed the publication of the liveliest, funniest, scariest and most moving children’s stories ever written."

Somehow, someway, not altogether un-mysteriously, the little stories have quite literally changed the world.

IN THE END
J. K. Rowling believes that her little fictional stories have something to do with the fact that she believes in God, and not in any God either (and not because her parents were all that keen on Joanne going to church as a child). It is the God of Jesus Christ, whom the Spirit mysteriously makes to known to us, even in the secret places of the heart, that she believes.

If Stanley Hauerwas is right, that "both love and great art show us our world with a clarity which startles us because we are not used to looking at the real world at all,” then perhaps Rowling has disclosed something true about the world which God so loves that we would not have seen otherwise.

Perhaps the world has discovered something about love in the little stories which has awakened a yearning to know the source of all true loves.

Perhaps what is needed then are a few brave parents who will not only encourage their children to read such stories, and others like them--many others like them--and to appreciate such stories, but also to nurture their children to become storytellers themselves. Would that we had a few brave parents who, when they saw signs of giftedness, opened up all the stops and emptied the coffers to help their children to become storytellers by vocation, because they saw it as an important facet of God's economy of abundance. My hunch is that many such parents exist. May God bless their tribe.

It's just a little story, they say, a fictional one at that. But it's a story that will continue to rule the world, more powerfully I'm afraid than our best sermons or our most clever essays. Why? Because, like all good stories, the story of Harry Potter and the community of friends that surrounded him for seven years has captured our affections and our imaginations.

They say it all ends tonight. Yet it's really only just beginning.

Here's to going to the movie theater one last time in order to watch J. K. Rowling's final little story.

Alex Humphrey said…
You've put it beautifully. It's amazing how some stories cross cultures and speak to us. What is it about Rowling that birthed these books, that created these stories?

When we see things like this I imagine God is giving us the tiniest glimpse of His creativity.
4:29 PM

I went to the midnight showing here in Oxford last night, and it was remarkable to hear an entire theatre filled with people unashamedly weeping one moment, and cheering the next.

sam said…
saw it at noon today... in imax 3d of course... and loved how everyone clapped at the beginning and ends. it was not only a personal experience, but a communal one as well.
7:04 PM

w. david o. taylor said…
Alex: it is amazing, isn't it? I certainly think so.

Cole: I'm jealous. If I had a choice I might choose to watch it in the UK, with Harry's own people. And I have no doubt that Phaedra and I will probably cry. We're both pretty sentimental.

Samantha: I *love* it when a movie audience claps. It makes me feel like I'm in on something with a group of people that's on my side and I on theirs.

kelly said…
We saw it in 2d and it was gorgeous. The cinematography is so beautiful it's not clear to me what the point of 3d would be - though there are some scenes I imagine would be pretty cool with it, i.e. the dragon.

I cried in the expected places, but some of the scenes that hit me the most were not in places I was not expecting it. Go see it soon and take extra tissues.
11:35 AM

w. david o. taylor said…
Kelly, I wanted you to know that you're one of the parents I had in mind who already encourages his children to be creative in every which way. Proud of you and glad for your friendship--and for the tip on tissues too.
4:28 PM

Sue said…
Hi, I am from Australia.

If that story "rules the world" both now and into the future then I would argue that the world is in hell-deep trouble.

That having been said please find a completely different Understanding of Sacred Art and Sacred Culture and The Beautiful via these references.

Plus Reality Politics for Real People via:

The Criticism That Cures the Heart