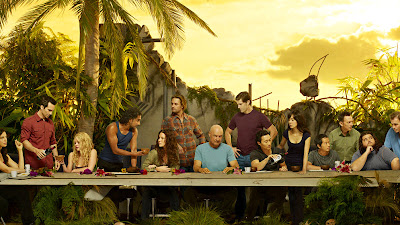 "The mystery of God's life (Geheimnis) is strange to us (unheimlich) because we are not at home with it (daheim)." -- Bonhoeffer, Predigt am Sonntag Trinitatis, May 27, 1934


A GOOD STORY
There are two basic elements to any good story and they are this:

1. That your audience keeps asking the question "What happens next?"

What makes me think of these things is the 18-minute talk J. J. Abrams gave at the TED conference in 2007 (see below). It's a pretty funny talk, too. I do recommend it. But the piece that captured my attention was Abrams' repeated emphasis on the importance of mystery to a good story. All good stories, he suggests, involve some component of mystery, some sense that a deeper reality lies beyond the audience's capacity to grasp yet leaves the audience feeling fuller rather than emptier because of it--fuller both because of the audience's encounter with mystery as well as because of its inability to finally or comprehensively grasp it.

A GOOD MYSTERY
His comments remind me of a sermon Dietrich Bonhoeffer once gave on the Trinity. He says:

Our tendency as human creatures, Bonhoeffer continues, is to resist the kind of mystery that marks God's world. We prefer to (scientifically) know things in order to use things. We employ the language of "the mastery of knowledge," because it helps us feel like we're still in control. Because we don't like the way it makes us feel small, we shrink from mystery. We construct physical and conceptual, relational and habitual apparatuses to shield us from it.

"The dearth of mystery in our modern life," he writes, "is our destruction and our poverty," and for Christians who allege to worship a God who exists mysteriously as three persons in one essence it is a shame that both our worship practices and our artistic practices resist or reject the mysterious character that marks our lives as creatures made in the image of this God.

Let me rephrase that sentence, in order to put it in a more personal context. It is a shame that conservative Protestantism exhibits such an allergic tendency to mystery.  It is a shame that our corporate worship often makes the most minimal space for mystery. We prefer to hear sermons that explain things definitely. We like to sing songs whose meaning we can account for on rational grounds. The architectural and artistic shape of our sanctuaries, whatever they may be, err on the utilitarian side, and if symbols are employed they tend to be safe ones--that's a fish, that's a cup, that's a flame. End of exchange.

This is a generalized broadside, I recognize. It does not describe all conservative Protestants. I happily acknowledge the many exceptions.

EXERCISES IN MYSTERY
The more interesting point for me, then, is a practical one. If the large majority of our life as Christians is engaged in practices--whether liturgical or artistic, whether occupational or relational--that habituate us away from mystery and towards the pragmatic, rational and technical, how will we become a people who indwell the mystery of Christ, as saint Paul describes it? How do we become a people at home in the mystery of the Father, Son and Holy Spirit if the habits of our lives build muscles that make us averse to this mystery? 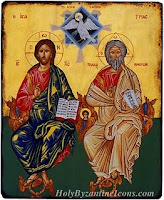 That's where I think what we do weekly in corporate worship matters. That's where I think that the kind of art we create and ingest matters. It matters not so much theoretically as concretely. It matters for the kinds of persons we in fact are, not for the kinds of persons we wish we were. Unless we are engaged in practices, daily and weekly, monthly and yearly, that cultivate an appetite, or to use Bonhoeffer's language, a sense of being at home with mystery, then we will remain the kinds of person who shrink from mystery rather than delve deep into it, rather than revel in it and thereby find ourselves becoming simultaneously smaller and bigger, more ourselves.

When we inhabit good stories, we acquire a "feel"for mystery. That feeling does not automatically translate into faith in Christ. Such faith requires conversion, and conversion usually involves a long and complex process if we're talking about the conversion of our whole lives towards Christ, which the Scriptures describe as discipleship. But good stories still have their place in our conversion stories. To the extent that they help us to imagine what we could become, or to allusively warn us against a more vicious version of ourselves, they serve the work of the Spirit. To the extent that they form in us a sense for the mysterious quality of God's world and for God himself, they serve a good role (and of course they do so much more than that).

It is for this reason that stories like the kind for which J. J. Abrams is responsible, such as LOST, ALIAS, "Cloverfield" and "Super 8," can be, quite literally, good for us. Whether he self-consciously seeks to accomplish this goal, Abrams' stories, which (often maddeningly) keep us asking the question, "What happens next?", serve as exercises in mystery; small "m" mystery perhaps but never far from large "M" mystery. In the talk that he gives at TED, Abrams both winsomely and perhaps again unknowingly serves as witness to the patterns of God's kingdom, and for that, as I plow through season 5 of LOST, I am grateful.

(Here below I include a video of Abrams' talk as well as two other artworks that caught my attention over the past week.)


3. Malcolm Guite's "Love's Choice: A Sonnet for the Feast of Corpus Christi"

This is a beautiful sonnet by my British friend Malcolm Guite, who also happens to remind Phaedra and me of Tom Bombadil. The last line of this sonnet is especially stirring. Do yourself a favor and click the audio link so you can hear Malcolm reading the poem himself.

Dave said…
Thanks for some great thoughts! I find myself so easily falling into the theological modernist trap following my graduate studies of presuming to think that I can wrap my brain around the Infinite. I recognize, with a sense of irony, that I know so much more about God after my studies, but I feel I knew Him so much better before.
2:54 PM

Alisha said…
"how will we become a people who indwell the mystery of Christ, as saint Paul describes it? How do we become a people at home in the mystery of the Father, Son and Holy Spirit if the habits of our lives build muscles that make us averse to this mystery?"
As a Catholic this answer for me is simple - in the sacramental life found in the Eucharist, in Confession etc. What makes it difficult in practice is when the mystery of the sacramental life is handled in pedestrian way, is not treated with reverence - while that can't undo the reality of the sacrament, it certainly can dull our ability to receive it.
5:33 PM

w. david o. taylor said…
Dave, I understand how you feel. I spent five years in seminary, and while I loved my time there it disoriented my relationship with God, in some ways necessary but in others unhelpfully. I thank God for my seminary education. And I thank God for the congregation that received me during and after my education and helped me to rediscover my relationship with God as well as with the body of Christ.

Alisha: very much agreed, on all accounts.
9:18 AM

Buddy Eades said…
Thanks - someone once reminded me that those that study especially in Theological Institutions be wary of beginning to treat Holy things as common. Those of us who minister and care for the artist, the Christian and work with the Church and it's worship need to be careful that we do not forget the deep and holy nature of the person we worship.

Whether we put together worship services or create art the believer can't forget the mystery and wonder of the God who has made himself know to us and continues to work in and through us. Great post
6:34 AM