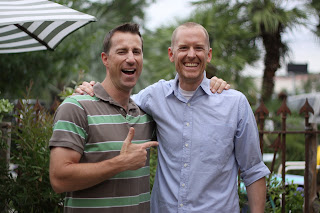 "It is one of the blessings of old friends that you can afford to be stupid with them." -- Ralph Waldo Emerson

Chuy's (aka: "apodo para todos los que se llaman Jesus")
I've been thinking about friendship a lot in the past few months. I'm not exactly sure why. I wrote a bit about it recently. I've preached on it. But I don't think that explains the strong undercurrent of feeling that has accompanied my daydreaming of late.

Last night I hung out with Nate Sanford. Phaedra and I ate dinner with him at Chuy's in the Woodlands, north of Houston, Texas. It'd been ten years since I saw him last.

I'd come to Houston in September of 2001, just days before 9/11, to take a six-day silent retreat with the sisters of the Villa de Matel Convent. At the end of my retreat, I drove over to Northland Christian School, where he had just taken up a post as history teacher and head football coach.  I knocked on his classroom door and gave him a fine surprised. Our hugs, in front of a room full of teenage kids, were a loud, laughter-filled, body-pummeling affair.

Before that surprise visit it had been the summer of 1992, when he got married, that I saw him last.

A record of capital F friendship

As I anticipated our dinner last night I began to recall the close friendships in my life. During my elementary school years, living in Guatemala, I had one MK friend and two or three Guatemalan friends. By "friend" I mean capital F friend: the kind of friend who will hunt you down no matter what, who calls you on the phone for no reason and who, when he misses you, which is at least once a week, feels it as an ache.

During my teenage years I had one bosom buddy: Nate Sanford. I had other good friends, sure, but Nate was special. He loved me with a Jonathan-like love. During my twenties I didn't have a single close guy friend, not of the capital F kind, and mostly I think that was my fault (see second to last paragraph for why). It grieves me to look back on my behavior, on my pride, on my suspicion of others, on the impossibly high standards I kept for friendship that essentially barred entrance into the deeper places of my heart.

I was angry, driven, lonely and disoriented during most of my twenties, outward appearances notwithstanding.

The forging of capital F friendship
As I mention in the Comment magazine article, "The Art of Friendship," "It took the gracious but fiercely determined love of two guys to expose my broken thinking and to re-introduce me to the fabulous world of male friendship." Those two guys are Mike Akel and Jeffrey Travis, and the kind of friendship I forged with them came only through hundreds and hundreds of hours of shared experience.

I firmly believe that you've not crossed the threshold into capital F friendship until you've faced, and pressed through, conflict with each other. It's the moment I dread the most in a friendship. I secretly, and perversely, keep wishing for idyllic, conflict-free friendship, which is to say that I wish for things to be easy. But conflict is also the moment I know will prove the mettle of a friendship. I've lost count how many times Mike and Jeffrey have lovingly confronted me--and loved me through it.

Last night Nate and Phaedra and I laughed loudly and repeatedly. A woman nearby, whom we'd asked to take our picture, actually thought Nate and I were inebriated. We laughed at this too.

We laughed at each other's mannerisms, which have remained un-changed twenty years later. We both teared up, because we're both, at bottom, sentimental kind of guys. And as we hugged each other goodbye, long and fiercely, with kisses on the cheek, after we'd shared a prayer in the middle of the parking lot, we promised each other not to be idiots and let any more time go by without regular check-ins.

Signs of capital F friendship
You know your friend is a capital F friend when he says to you, while dipping a chip in creamy jalapeño, "Last year I pulled a muscle just east of my rectum." (The context for this of course is pertinent: he pulled it during a decathlon competition.)

You know your friend is a capital F friend when half of his enthusiasm at sharing your company involves him standing up from the table in front of the restaurant patrons in order to make an assortment of gesticulating points.

You know your friend is a capital F friend when you realized he's forgiven you many wrongs, tossing them "as far as the east is from the west."

It's hard to forge a capital F friend. It takes a long time, a good deal of grit, faith, shared space, a combination of both serious and silly shared experiences, and a determined intention to make it a priority. The world in which we live frustrates this kind of effort. In fact, both the pace of our North American culture and the constant devaluation of the term "friend" make it nearly impossible to find, let alone cultivate, kindred friendship.

That's why I'm so grateful and still a little sentimental today that I got to share dinner last night with Nate.

The cost of capital F friendship
My friend Jeffrey Travis said something to me once that I'll not forget. He said:

"David, if you have the opportunity to move, I want to challenge you. I want to challenge you, when the time comes to move to a new city, to move not just because of job opportunities. I want you to consider moving because of relationships. Consider that it might be just as important for your well-being to move near the people you love and who in turn love you--that is, your friends--as it might be to move for a propitious occupational opportunity."

Those are words are take more seriously now than I ever have, even if I'm not always exactly sure how that's supposed to happen practically. But who ever said a capital F friend was easy business?

It's worth it, though, and I can still hear Nate's laughter ringing in my head.

techne said…
This comment has been removed by the author.
9:58 PM

techne said…
i was at a professional development workshop last week and one of the faculty - speaking about maintaining health, specifically re: cherishing relationships - said the following: "it takes seven years to make a friend." looks like you're blessed.
9:59 PM

Sarah Kivell said…
This is one my favourite posts of yours. Thank-you for sharing your thoughts on Friendship...very insightful.
10:08 PM

shannon newby said…
I adore everything in this post. The pictures, the words....thanks DT for sharing! :)
10:22 AM

Unknown said…
How fitting that I am reading this today. My dear, closest Friend of the last eight years is moving in about six weeks. He is certainly a top-shelf, capital F friend. Tears have already been shed and I am sure many more will roll out over the next several weeks. Thanks for sharing the love David.
6:31 PM

w. david o. taylor said…
Thanks, good people. And I do realize there are many levels of friendship and for that I thank God.
8:21 PM

David Howard said…
He's always been a bit stronger than you hasn't he?
7:33 PM

Base Fitness said…
oh man, that made me cry. i love all those pictures! wow, the old soccer one brings back some serious memories. love you, david.
6:37 PM