Things I'm working on these days 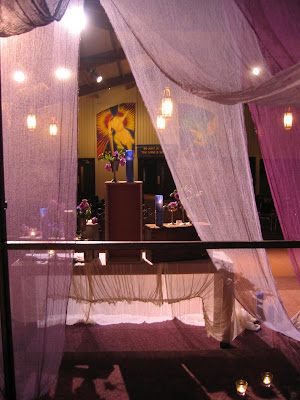 Since I get asked this question frequently enough, I thought I'd go ahead and mention a few of the things that I've been working on recently.

Worship, the Arts and Moral Formation
Two questions interest me about the kind of art that occurs in corporate worship.

1) How does such art not simply complement other functions of corporate worship--like illustrating sermons or decorating spaces--but enable a congregation to do something it could not otherwise do? That is, do the liturgical arts (for want of a pithier term) bring new things to the worship experience, without which the congregation might miss out on an essential opportunity for moral formation?

2) My second question assumes a positive answer to the first. What would be the conditions for a "successful" morally formative experience of art in corporate worship? Provisionally I find myself arguing that the liturgical arts serve not only to deepen our physical, affective and imaginative participation in corporate worship, they also serve to form virtue in us in their own way. That last phrase is key. Any kind argument I might develop further depends on a careful understanding of it.

If scholars make note of Calvin’s ideas about musical instruments, it is usually to observe the fact that he located them under the era of “figures and shadows.” Often, strangely enough, nothing will be said at all. In the case of Charles Garside’s exceptional essay, “The Origins of Calvin’s Theology of Music: 1536-1543,” the focus remains on music as a general topic. Peter Auksi rightly, I believe, identifies “simplicity” as a dominant aesthetic in Calvin’s liturgical ideas, but says little more, though that more is sharply incisive. 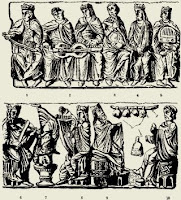 Jeremy Begbie presses Calvin in his underestimation of music’s particular capacities, while Herman Selderhuis delivers a fine review of Calvin’s view of instruments in the context of the Psalter. Paul Jones does more than most, but even here his exposition remains incomplete. The research I undertook recently intended to press the matter further.

Why exactly does Calvin situate instruments in the “dispensation of shadows and figures”? What grounds does he propose for this conclusion? What kinds of arguments does he make and does he remain consistent throughout?

On the encouragement of the professor who supervised my research, I will be seeking to publish my findings in an academic journal. I confess: it was a thrilling research experience.

Karl Barth on divine and human agency
One of the questions that continuingly vexes not only theologians but regular folk too, including artists, is, What does it mean to talk about human beings having a space "to be themselves"? The fear, and it is a very real one, is that we are merely pawns of the fates or puppets of an absolutely deterministic deity. 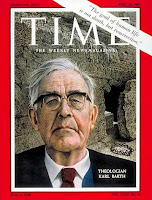 Christianly considered, is there a way that we can say that the human creature obtains a “space to be itself” (whatever that means),  while still maintaining God’s full sovereignty over creaturely life (whatever that means)? My particular interest in this question relates to role that the Holy Spirit plays in the dynamic of double agency. Recently my friend Tanner Capps and I jumped into the hornet's nest and worked on this material in an independent study with Jeremy. Our focus was Barth's Church Dogmatics, in particular III.3 and IV.2.

A key passage in Barth, among many, would be this one:

"The Ruler of world history is also the Creator who has given this particularity to the various creatures and creaturely groupings....  [God] is far too free not to be able to accept and joyfully to affirm [the human creature] in its particularity…. [Against all degenerative movement towards homogeneity, the work of God] has nothing whatever to do with a leveling down and flattening out of individuals and individual groupings…. To each of them He gives its own glory, its lasting worth, its definite value."

Not easy material, granted, but certainly worth devoting careful attention to, and it holds promise (or peril, depending on whom you ask) for the ways that we think about the artist's vocation.

Theological Aesthetics in the Catholic Tradition
Each spring Jeremy Begbie leads an independent study with his doctoral students. At the moment there are five of us. This spring our lusty group is working through a series of key Roman Catholic texts on theological aesthetics. Our goal is to investigate the way that they have influenced recent Catholic and Protestant writing on theology and the arts. 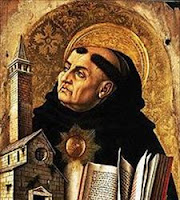 It's a tantalizing list of texts, but we'll need to bring our A game if we want to understand the not-for-the-faint-of-heart material well.

The Gospel of John, Holy Spirit and Materiality 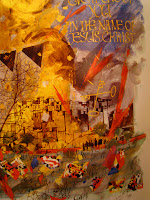 It is no secret that John 4:23-24 has functioned in the church's history as a kind of master text for thinking about worship. Christians have appealed to it repeatedly to argue, on the one hand, for an intensely immaterial worship (i.e. "invisible" and "internal") and, on the other, for an intensely material worship (i.e. "sensible" and "external"). In the late 2nd century Clement of Alexandria, like many before and after him, wrestled with the strange world of John. Its strangeness, he felt, lay precisely in comparison to the Synoptic narratives. In the end Clement concluded the following:

“Last of all, aware that the physical facts [ta somatika] had been recorded in the Gospels, encouraged by his pupils and irresistibly moved by the Spirit, John wrote a spiritual Gospel.” 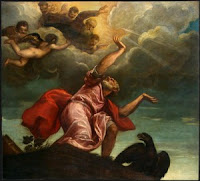 While Matthew, Mark and Luke wrote about the “outward facts,” Clement explains, John wrote about ta pneumatika, that is, about "spiritual matters." Whatever Clement had in mind with these phrases, a larger concern of mine in my current study of John is to discover how "Spirit" language in John operates in the narrative and in particular in relation worship, history, materiality, ideas about God and the “gospel.”

It will be obvious if you've read this blog for any length of time that I'm intensely curious about how, say, Pentecostals and Presbyterians, or high church and low church folk, build arguments for the inclusion or exclusion of the arts in corporate worship. If you observe long enough you begin to observe how, in a twist of John language, the Spirit is tossed about this way and that in people's declarations about pneumatology. 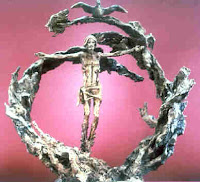 There is plenty of work ahead and it's quite fun to have on my hand a hypothesis whose outcome I cannot predict in advance. As always: something begets something. So we'll keep reading both broadly and deeply and see what we find. I feel incredibly lucky to be able to study these different ideas at length.

(First image at top of the page is of one of our Compline services at Hope Chapel. Kate Van Dyke's banners of St. Michael and St. Gabriel hang in the background. How I miss those services.)

And now for something different. 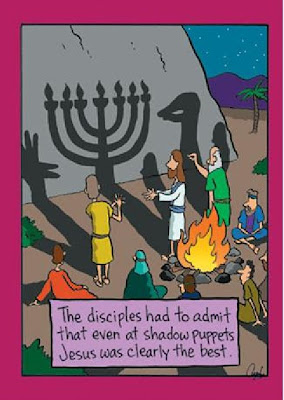 cardiphonia said…
wow. Looking forward to reading your work on Calvin and instruments. interesting. just finished reading peter leithart's work on the davidic liturgical revolution. he talks at some length about the appearance of musical instruments in david's reign. Musical instruments as an eschatalogical development of the utensils used to serve the ark.
3:10 PM

Adam said…
Good grief David, couldn't you at least pick ONE subject in which I'm not interested? Ha!

With regard to your first topic, I would strongly suggest you read Elaine Scarry's ON BEAUTY AND BEING JUST, and also Iris Murdoch's ON THE SOVEREIGNTY OF GOOD. I think i've mentioned those before. They are key, I think, in the secular discussion of the role of Beauty in moral transformation. I've written a paper on the subject that you might be interested in. It pulls from Scarry, Murdoch, and others to work toward an argument of why Beauty is worth investing in even when that money/time invested in beauty could be given to, for example, the poor.
4:04 PM

Mark Chambers said…
I love you Anglican types. You ask so much more interesting questions than us.....hhmmmmm...uuhh...PCA types.

w. david o. taylor said…
Bruce, would love to chat with you about Calvin and the different ways that the Reformed Tradition has thought about music. I like what I've read of Leithart. Which book do you have in mind here?

Adam, it'd be great to read your paper. Please do pass it along. And the reason, my friend, that our interests overlap so much is that we belong to the same tribe. And I wouldn't want it any other way.

Mark, last I checked there were some pretty sharp minds and interesting artistic projects at work in the PCA tradition. I'd say BiFrost Arts is a pretty impressive outfit, and folks like Bill Edgar and Tim Keller are invaluable allies to the general cause. And hey, the PCA communion needs smart people like you, so don't leave just yet!
7:31 PM

ceciliabrie said…
I expect Mako Fujimura would probably align himself with PCA as well :)
8:26 PM

Mark Chambers said…
Maybe it was something I ate.
4:03 AM

w. david o. taylor said…
Yes, indeed, Mako too, and Vito and Monique Aiuto and I guess so many others I don't know by name.
7:42 AM

Jim Janknegt said…
I applaud your Catholic aesthetic reading list and would add one more I found extremely helpful: "Painting and Reality" by Etienne Gilson. http://www.amazon.com/PAINTING-REALITY-MELLON-LECTURES-1955/dp/B000K6RVOM/ref=sr_1_3?ie=UTF8&qid=1298660370&sr=8-3
11:04 AM

w. david o. taylor said…
Jim, yes, Gilson would be great to add. Unfortunately we simply don't have the time to read all the good works, which of course would have to include Flannery O'Connor, G. K. Chesterton, Walker Percy and John Henry Newman (for his indirect influence). And even then, that's mostly 20th century, with a dip into the 19th.

I guess that's why some people become teachers: so they can keep reading the rest of their lives.
11:16 AM

sam said…
I'm most interested in the first questions as I think about making some art for our space during lent and easter.

I hope very much the answer to the question is a yes... or this will all have been quite a wash.
4:33 PM

w. david o. taylor said…
Samantha, the answer is a most resounding YES. I'm writing an article for Christianity Today at the moment in which I'll be unpacking those two questions.

Hey...I just had an idea. If you know what you're doing for y'alls space and if you have any sketches, I might be interesting in seeing them with the possibility of referencing them in the article. I love your artwork across the board and would wish to figure out a way to incorporate it into my piece (which, granted, is swelling with illustrations, but it never hurts to have more because different illustrations work better or worse in any given place in the essay).

Daniel said…
Where/when will the stuff on Calvin and instruments be published? Any interest in PMing interested readers a draft?

I pastor in one of those crazy exclusive psalm-singing, a cappella denominations. I am not judgmental toward those who worship differently (i.e. 98% of Christendom) but I do think there's something deeply good about the simplicity. It helps keep worship itself from becoming the focus of worship, like the stepped elaborate altars forbidden in Exodus 20:22-26.

There are conflicting reports about Calvin on the instruments. Hughes Old says that the Genevan city government was too cheap to buy an organ for St. Pierre, so he made do!
7:00 AM

w. david o. taylor said…
Daniel, thanks for your comment. It's great to meet somebody whose church worships with the psalms. It must be quite beautiful. At the moment I am not sure where the article will be published. I'm still tinkering with it, so I'll probably hold on to the essay I'm ready to send it to a journal. But thanks for the offer to read in advance. Calvin is a fascinating man and always worth a careful read.
2:15 PM