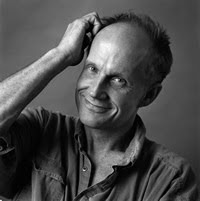 The pastor at the church I attended this past Sunday (Church of the Servant) read a poem by Tony Hoagland and it reminded me of a number of artists I know. If you want to read more of Hoagland's work, go here for a short bio note, here for a poem he titles "Beauty," and here for an essay he wrote, called "Fear of Narrative and the Skittery Poem of Our Moment."

And when we were eight, or nine,
our father took us back into the Alabama woods,
found a rotten log, and with his hunting knife

pried off a slab of bark
to show the hundred kinds of bugs and grubs
that we would have to eat in a time of war.

"The ones who will survive," he told us,
looking at us hard,
"are the ones who are willing to do anything."
Then he popped one of those pale slugs
into his mouth and started chewing.

And that was Lesson Number 4
in The Green Beret Book of Childrearing.

I looked at my pale, scrawny, knock-kneed, bug-eyed brother,
who was identical to me,
and saw that, in a world that ate the weak,
we didn't have a prayer,

and next thing I remember, I'm working for a living
at a boring job
that I'm afraid of losing,

with a wife whose lack of love for me
is like a lack of oxygen,
and this dead thing in my chest
that used to be my heart.

Oh, if he were alive, I would tell him, "Dad,
you were right! I ate a lot of stuff
far worse than bugs."

down into the belly of the world.

David Howard said…
Quite a good poem - easy to read, in terms a common man can understand. I like the down to earth language he uses, which allows the deeper message to hook in at the end by surprise, sort of like a fish hook catching in your mouth.
All men and women have something profound to say about life, in their own terms and expression.
3:06 AM

w. david o. taylor said…
David, I agree. While some may find the poem "too accessible," I find that it suggests aptly thru a brief narrative what many, far too many, people experience.
6:44 AM

Kenny A. Chaffin said…
There is no such thing as "Too Accessible"
The cryptic, impenetrable nature of literary poetry is why it is despised by virtually everyone including literature teachers.
9:40 AM