Gloria in excelsis Deo: Or why it's good for Christians to sing songs in a foreign language 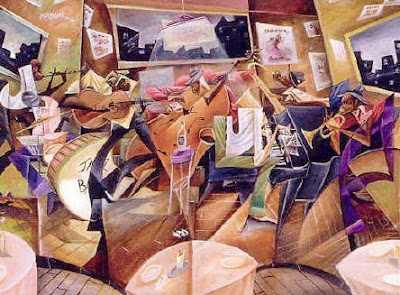 This morning I attended Church of the Servant in Grand Rapids, Michigan. COS, as they call it among themselves, is, I find, an odd duck in the Christian Reformed Church tradition. They're Dutch Reformed in heritage, which you'd guess pretty quickly by hearing them introduce themselves--VanderZicht, Klynstra, Van Oene, Spoelma, Boersma--but they're a liturgico-global, artistically ecumenical, justice-minded and narrative-midrashic preaching styled congregation. A generous spirit marks their leadership. I always enjoy visiting when I'm in town.

This morning the New Testament Scripture was read in two languages. A Rwandan man read the Luke passage in Kinyarwanda, while a college kid read the same text in English. Back and forth they moved through the reading and while it meant that the reading took an extra-long amount time, I was strangely moved by hearing Jesus' instructions to the "seventy" in Bantu.

At different points in the service we sang songs in a foreign tongue, a couple in Spanish, one in Zulu. On the back of our worship program I found a short essay written by the minister of music, Greg Scheer. Greg is a new friend with a whip-cracking wit. He came down for the symposium in Austin and I've enjoyed learning from him in the intervening years. I appreciated the thoughtful approach by which he sought to persuade us monocultural folk to be the catholic church, not just to state it in the Creed. I asked if I could reproduce his essay here. He said yes. If you would like to read more of his "Liturgy Lessons," go here and here.

Why do we sing languages other than English in worship at Church of the Servant? Doesn’t it betray our Protestant roots to sing songs or read scripture in languages other than the common tongue? Have we capitulated to multiculturalism with nary a thought for the theology of worship? Is this some strange campaign to annoy and befuddle members of the congregation? These are all good questions, and in this liturgy lesson I’ll try to untangle some of these important issues of language.

English is not the mother tongue of everyone at COS, but it is our common language. Therefore most of our worship is in English. Luther would be proud. But at the same time that we affirm English as our common language, we also want to celebrate our place in the historic and global Church. One of the ways we do this is to sing each other’s songs.

Sharing songs invites us into each other’s lives. Last week Matilda, Amie, Josephine and I had a great time singing songs from their churches in Liberia and Sierra Leone. By singing with them I was able to take on their cultural lenses and see God in a new way. This type of paradigm-expanding exchange goes on even when we sing the songs of people we don’t know personally. The music allows us to share our faith with our brothers and sisters around the world.

But, as a COS member recently asked me, doesn’t singing someone’s song imply a sort of solidarity with them? Yes, I think it does, and that’s a good thing. Singing songs from other lands doesn’t obligate us to agree with them fully about politics and social mores (that doesn’t even happen within our own church!), but it does help us focus on what we have in common in Christ. I’d be very pleased if the songs we sing at COS caused members to be more sympathetic when hearing world news, more willing to work for global justice, and less inclined to talk of “those people” when discussing things like immigration.

When we sing in other languages, doesn’t it distract us from worship, causing us to concentrate on the phonetics of the language rather than praising God? This can be a real danger. That’s why I turn to the Gloria in Excelsis Deo System™ of congregational song for guidance. GEDS states that small phrases in foreign languages can be learned phonetically and can take on deep meaning. Do you find your Christmas worship distracted by singing the phrase “Gloria in excelsis Deo” during the hymn “Angels We Have Heard on High”? Probably not. In the same way, songs like “Santo, Santo, Santo” can be readily learned by an English-speaking congregation, and I would even argue that at COS we sing “Santo” in Spanish with more emotion than we do in English.

Singing with the Spirit and with understanding is a delicate balance. I pray that Church of the Servant’s approach to language in worship glorifies God and nourishes God’s people.

David Howard said…
Interesting blog david - I will have to check it out on a regular basis. All the best from another artist who lives in Queensland Australia.
3:51 AM

Chip said…
Hi, I am a blogger who watched your interview about
art and the church and really liked what you said. I found your blog and really like it. Concerning the last post I really have to agree with the guy about singing in a different language. I recently went on a mission trip to Mexico and enjoyed worshiping in a different language.
I hope you do not mind, but I put links to your blog from mine. If you want me to remove them I will.

w. david o. taylor said…
David, thanks for your comment. So good to meet another Ausie artist. Very impressive website and body of work. Well done.

Chip, thanks for the kind words. I appreciate you linking my blog to yours. That's great. I've traveled and visited Mexico a number of times and can imagine the kind of singing experience you might have had. Blessings to you.
11:51 AM