A fun interview with Christianity Today (plus "Why these books?") 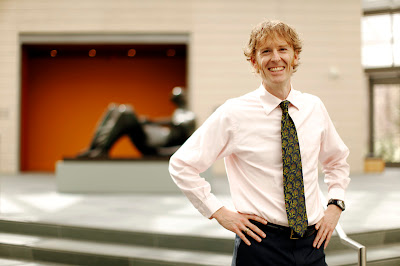 Here is a link to an interview I did with Mark Moring at Christianity Today. I was honored to be asked. A nice and very talented man named Todd Bennett took my non-bearded mug at the Nasher Museum of Art.

Somebody asked me why I was reading the books I mentioned. Here is a brief reply:

1. George Herbert's poetry: One of my areas of interest is Anglican history and liturgy. Herbert was both a pastor and poet, and he's certainly one of the best bi-vocational parsons the Anglican tradition has ever produced.

2. David Maine's novel, Fallen: I think Maine is fantastic. I know not everybody likes his historical fiction narratives. That's fine. But if I could, and if I had a $100 million, I'd option all three of his biblical re-tellings and hand them over to Alejandro González Iñárritu, P. T. Anderson and Clint Eastwood to turn them into movies. A movie, of course, would never be able to replicate its literary prototype. To expect that, as so often is, is to set yourself up for disappointment. But a film could very well make strange again what for many has turned all too familiar: the biblical cosmos.

3. Kevin Vanhoozer's The Drama of Doctrine: I'm sympathetic to Vanhoozer's post-conservative perspective. Also, as somebody who has loved theater his whole life, I love his dramatic reading of theology.

4. Harry Potter in Spanish: I've got to take a language exam for my program. I left Guatemala at 13 and never really learned my "adult" or "theological" or "academic" Spanish. So I'm working my way through the Harry Potter series in Spanish to oil down a very rusty foreign language machinery. After Harry, it'll be Gustavo Gutierrez and Rene Padilla. Next summer it's German.


A question that did not make the print version, but which was fun to answer:

"Your wife teaches art to children, right? I think of Christ’s command for us to approach him as if we were children, so I wonder if there’s something about a child’s natural ability to “get” art in ways that we as adults don’t get – or have to work at. Any ideas?

My wife tells me that her students can be just as paralyzed by fear and self-doubt as adults. But they also have a capacity more easily to be unselfconscious. They’re less burdened with the shouldas and couldas. One of her eight-year old kids recently said, with a little twinkle in her eye, “Mrs. Phaedra, I tried to draw a mermaid, and mermaids are hard to draw, but I just drew it over and over and over and over and over again, because that’s what you have to do.” I love that as an image for spiritual disciplines. By God’s grace you do something over and over again, and you trust that He forms us in the midst of our discipline."

"Growing up as a missionary kid in Guatemala, David Taylor was learning the meaning of beauty before he even realized it. Taylor names the tropical landscape as one of five key elements in shaping his own identity as an artist. The others: listening to his mother play classical music on her grand piano; watching his father tend orchids in the backyard greenhouse; reading 'books outside my tradition' recommended by his Regent College professors, including Eugene Peterson; and 'being given permission to try and fail—again and again—by the leadership of Hope Chapel [in Austin, Texas], as I sought to discover what an arts ministry was supposed to be about.'"

Alan said…
David thanks so much for doing your "thang." For deliberately applying yourself to help us all develop as we seek to engage in art making, culture making and the care of the church. I have been challenged and encouraged by your blog, the book, and the few choice interactions. I bought Beauty for a friend this week, I couldn't stand that they had not been able to get the book yet and I couldn't part with mine either! Thanks
8:24 PM

w. david o. taylor said…
Alan, you're a good and kind man. Thank you. You just made my night.

Is there a chance that I'll see you at the Union University arts event in April 2011? I know Michael will be there.

Well. I should probably get in bed right now. That would be the most appropriate "thang" for me to do at the moment. And I sure hope you'll keep persevering with hope in the thangs that God has called you to. Again, thank you for the kind word.
8:56 PM

Alan said…
Sure hope to be there.

Look forward to crossing paths.
4:37 AM

Marcy Muser said…
David, it's been a lot of years, and maybe you don't even remember me - I was just one of your best friends' big sister when we were MK's in Guate together. It's fun (and thought-provoking!) to read your blog and see where you are today - when people move away it seems like they freeze in our minds and never age, until we suddenly run into them again and realize they did, and so did we. :)

I'm definitely going to keep your blog in my "Favorites" and check in with you from time to time; I appreciate your thoughts. I have nothing so deep to report myself: I did high school by correspondence, graduated from Biola (it was great to see you spoke there recently!), got married, worked a while, had two beautiful daughters who are now 10 and 13, and am now a homeschooling mom. I'd love to hear more about your family if you have time (maybe this summer once finals are over?). My email is homemarcy@msn.com.

Oh, and congratulations on getting interviewed by Christianity Today! :)

sarah carleton said…
Thank you.
I am in the midst of reading "For the Beauty of the Church" and have been following your blog for a few months. I can't express how much it means to have someone care so passionately about caring for the spiritual lives of artists. As someone who loves her art and her faith I often find these two worlds being forced to part or forced together in simplistic ways.

So thank you. For your work, for your passion, and for caring to dwell deeply in faith and art and for supporting those who work to create.

w. david o. taylor said…
Deanna, so fun to say hi over the expanse of years. It's funny how the internet, especially blogs and FB, affords so many opportunities to find people you thought you'd never see till you'd cross the veil. It's nice to hear what you're doing. It sounds quite fulfilling. Do you have photographs of your family, including your Porter family? It'd be fun to see. But thanks again for sending me a note. I'll be sure to pass it along to my extended family.

Sarah: thank you kindly. It pleases me to no end to hear that I've been able to help somebody connect the parts of their lives. I've had so many people help me in that way. If I could, I'd climb the highest radio tower in the world and shout the good news that artists can live integrated lives, deeply given to their Christian faith, deeply given to their vocation and craft. So bless you as you continue to pursue your work as an actor. I'm glad to know you.
10:13 AM

Marcy Muser said…
David, sorry to be so long getting back to you. Look me up on Facebook and you can see pics. :)
7:53 AM