I first met Lauren ten years ago. We were sitting in the back row of a hotel ballroom during a worship service. We'd joined a couple hundred other twenty- and thirty-something folk in Washington State for a conference called The Vine. The Vine (back yeeeeears ago when the term "Gen-X" was still in currency) brought together Protestants, Catholics and Orthodox to do one thing: to expose us to the vast range of Christian activity in the world. It was quite inspiring.

Three years later Lauren would publish her first book, Girl Meets God, to considerable acclaim. Our paths crossed six years later in 2006, at the Grand Rapids airport, as we made our way to Calvin College's Festival of Faith & Writing. Then in May of 2008 I wrote her a note. In it I invited her to contribute a chapter to my book, For the Beauty of the Church: Casting a Vision for the Arts. Long story short she said yes, and here we are two years later with a tremendous essay on patronage. Or rather it is an essay on the culturally and emotionally complicated but theologically necessary practice of patronage. I'm including an excerpt from the opening of her terrific chapter.

One practical note: to write "T-minus 2" is a little fudgy of me. The book is actually out. All week long I've been saying "Woohoo!" and "Is that book on my desk really my book?" It is, thanks be to God. You can pre-order it pretty much anywhere, but Baker Books or Amazon will work just fine, I imagine.

The painting above is by Baker Galloway. It accompanies Lauren's chapter in the book. Its title is "Just Trying to Get By," and I love how it plays, very sneakily, with Lauren's essay.

THE ART PATRON: Someone Who Can't Draw a Straight Line Tries to Defend her Art-Buying Habit

Five years ago, I was asked a question about art I have not been able to shake. The setting: a lecture hall at a small Christian school in the northeast. I had been asked to give a lecture about memoir. The talk went pretty well, and many people in the audience had read Girl Meets God, the memoir that recounts a year shortly after my conversion from Judaism to Christianity. Afterwards, one of the audience members approached me. She said that she had enjoyed my book and had learned a lot about Judaism from it. But she was very disturbed by one passage, which she flipped to in her copy of the book. It was marked by a big black “X” in the margin, and an even bigger black question mark.

The passage in question was my discussion of the first time I ever spent money on art, which was a papercutting of Ruth 1:21 by a contemporary Jewish artist named Diane Paley. I purchased this papercutting at a very particular moment: a season in which I was trying to understand what kind of relationship (if any) I could still have with Judaism; a time during which, in ways not always easy to articulate, I deeply mourned my own rejection of the Judaism in which I had grown up. . . .

That was the passage from Girl Meets God my interlocutor found troubling—my description of buying the papercutting. She said she was disturbed by my willingness to spend that much money on a piece of art. I think that she felt I was too glib and flippant in narrating that purchase, that I hadn’t demonstrated any awareness of the privilege entailed in dropping the equivalent of two months’ rent on a piece of art. “How, in terms of Christian ethics,” she asked, “can you justify spending that money on art when there are poor people to be fed?” 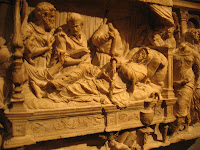 I have pondered her question many, many times. The woman’s concern . . . is a variation of a long-standing trope that tacitly criticizes the excesses of European cathedrals. Money for stained glass windows? Gold altars? Elaborate stone carvings? When there are starving children around the corner? Scandalous! This is just one of the themes that has given many in the world—and many in the church—the impression that Christians, or at least Protestants, are hostile to “the arts.”

I tried for a two-pronged response: on one hand, to take my interlocutor seriously as a messenger speaking on behalf the God who became poor himself and, on the other, to undertake my obligations to that God and to the poor people in my neighborhood in the frame of what we might call a Eucharistic ethics of abundance. The God who impoverished himself is also the God of abundance, and somehow, perhaps at times nonsensically, Christians are called to live out of an ethic not of scarcity but of abundance—an abundance that extends both to the homeless neighbor and to the artist neighbor. . . . 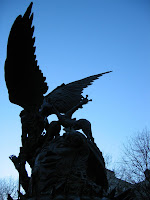 w. david o. taylor said…
Thanks! Her chapter is a demanding one, but also a very encouraging and inspiring one too. It'll be worth careful reading.
5:45 AM

Unknown said…
Fantastic stuff. Just ordered a copy yesterday from our local bookstore. Can hardly wait to read it. I have been reading and mining your blog for the last couple of years. I can honestly say that you have opened my eyes and challenged my thoughts concerning the arts and the church. Thanks for continuing to post insightful and thoughtful reflections. Onward and Upward!

w. david o. taylor said…
Jason, thank you for your kind words. That's so encouraging to hear. I hope the book is helpful to you. By the way, really nice work on your blog. Well done. And I truly love that you're a high school art teacher. May God bless you three-trillion worth.
8:31 AM

David JP Hooker said…
So glad to see there is a chapter on patronage in the book! I have been thinking about patronage a lot myself, especially in relationship to artist of faith (ironically, artist often fall into the trap of feeling marginalized AND failing to support other artists financially, which just compounds the problem). We are all too eager ask others to "foot the bill."
8:32 AM

w. david o. taylor said…
David, thanks for your note. I know of a number of folk who feel called to awaken the church to her calling as a patron--and it's a calling that is much bigger than just having lots of money to give away.

Blessings on your work as an art prof at Wheaton. I just had a fabulous lunch conversation with the art faculty at Biola. Very encouraging.
6:57 PM