Article: On Architecture & the Church 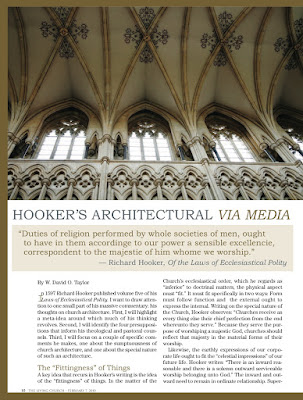 I published an article recently on Richard Hooker and church architecture. Hooker is the 16th-century divine who bequeathed to Anglicanism the possibility of a via media. Navigating between "Rome" and "Geneva," he posited a liturgy that was both catholic and biblical (and, yes, those terms are anything but self-evident). But as the modern literature scholar Charles Sisson writes, “In the long and crowded roll of great English men of letters there is no figure of greater significance to the instructed mind as Hooker." His ideas, that is, are worth paying attention to.

My article appeared in the publication, The Living Church. Regrettably the piece is not retrievable online. You'd have to buy the magazine. But it's a good mag; solid folks behind it, including my friend Douglas Leblanc. Their tagline is: "An Independent Weekly Supporting Catholic Anglicanism."

The above photo is page 10 of their February 7 -- "Church Architecture & Restoration Issue." That's where my article begins.

I am pasting an excerpt from the piece (which, by the way, I thoroughly enjoyed writing), with the hope that you will consider purchasing the magazine itself.

Hooker understood that decisions about the Church’s liturgical order could not be made casually. He offered therefore four general principles which, he believed, could be reasonably granted about the outward form of true religion. These four principles function in Hooker’s argument in axiomatic fashion, in need not of evidence but only of lively commendation. They are presuppositions which, if respected, he believed would yield a form of worship that might glorify God. They are, in summary form:

1. Our external life ought to be an expression of internal and invisible realities.

2. The wisdom of the ancients ought to hold heavier sway over the innovations of the youth.

3. When we do innovate — and the Church has always had occasion to amend old forms and to introduce new ones — we ought to allow the authority of “Mother Church” to decide these matters chiefly because wisdom operates most truly in communal form.

4. The Church should not enforce its polity in rigid manner, but rather allow for a degree of latitude in the application of that polity to the different circumstances of parishes.

Behind the first principle lies a sacramental vision of the world. For Hooker the Church was mystically the Body of Christ in the world. This view becomes most evident in his treatment of the doctrine of the Incarnation. As he asserts: “The Church is to us that very mother of our new birth in whose bowels we are all bred, at whose breasts we receive nourishment. … God made Eve of the rib of Adam. And his Church he frameth out of the very flesh, the very wounded and bleeding side of the Son of man.” Thus for Hooker signs on earth can and, indeed, must resemble as closely as possible the things they signify -- the Church visible resembling the Church that “in heaven is beautified.”

Behind the second principle is a question: Which are the best kinds of decisions? Hooker’s answer: the wise ones. Wisdom should be held in the highest regard in our search for right order. Wisdom also is to be seen largely as the property of elders — and in the case of the historical Church, the ancients — so it is to them that we must defer.

The third principle concedes that the Church will have need to reform its liturgy. When occasion arises, Christians should accept that “in the counsel of many, there is much wisdom” (Prov. 12:15). Hooker asks (over against his accusers): If a man thinks he has been given a special message from God, will not God confirm it to others? The presumed answer is yes. Where innovation occurs, then, it ought to be done under the guidance of the Church’s sanctioned authority, not on the “bare and naked” conceit of any one person.

Hooker’s fourth proposition testifies to a refreshingly practical spirit that marks the whole of his writing. He believed no general law, especially pertaining to adiaphora (things indifferent), could be universally applied in an inflexible manner to all persons in all times and places. That would be to misunderstand the nature of law. Our goal rather should be “to practice general laws according to their right meaning.” Laws may be just, but they are rarely perfect. Individual equity will not be against the law, but it may sometimes lie beyond it. In some cases or for the common good, therefore, “certain profitable ordinances” will sometimes need to be released, rather than all people always be strictly required to observe them.

Jennifer Parks said…
Not pertinent, but: any chance of you re-posting the lenten devotional you and Phaedra made last year? I tried the old link and was denied access.
1:41 PM

w. david o. taylor said…
Hm. I think it might be possible. Let me check. I believe both Christ Church in Austin and All Saints in Durham, NC, will be making use of the devotional. Surely one of them will be online. I'll check today and write another comment tomorrow with an answer.

w. david o. taylor said…
Jennifer, I've just seen that both Christ Church Anglican (in Austin, TX) and All Saints Anglican (in Durham, NC, have posted variants of the Lenten devotional. If I knew how to hyperlink in a comment, I'd do it. If you go to their respective websites, you'll probably find it pretty easy. Hope this helps.
2:36 PM

Jennifer Parks said…
Thank you for checking! I did notice that Christ Church eventually put it up, and I've been making use of it.

Also: small world...I substitute taught as a music teacher while back home this winter and ended up with your niece and nephews in my classes. They were fun!

w. david o. taylor said…
Glad to help. And fun that you connected with my nieces and nephews.

Jennifer Parks said…
Jennifer Parks, from Westlake Bible back in the day. I remember a piece you and your family put on while that church still met at Hill Country MS...not sure how to describe it...I was probably about thirteen and had no idea what to make of it.

Later, I worked at Hill House before moving to middle-of-nowhere Colorado in 2006.

So probably not obvious! Your blog is helpful to me as I'm taking some baby steps in the tiny arts community here in Lake City -- thanks for writing it.
11:48 AM

w. david o. taylor said…
That's very helpful, Jennifer. Thank you. Blast from the past at the ole WBC days. I'm headed out to Biola University next week and hope to see Don Sunukjian while there. Blessings to you in your nascent efforts.
12:31 PM