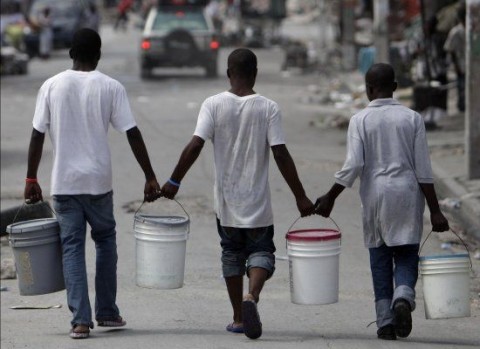 In this fourth apéritif of our book, For the Beauty of the Church, I am including an excerpt from the divine Barbara Nicolosi Harrington. With the devastation in Haiti fresh in our minds, as artists we will wonder what our role is. Certainly our chief role as Christians is to pray. We pray to God for wisdom and compassion: wisdom to discern our appropriate response and compassion to keep our hearts from growing numb to the inundation of information. But then what?

I think Barbara shows us a way forward. In the face of our world's brokenness, distorted by both

If you're interested in the whole chapter, which alone is worth the price of admission for her delectable sense of humor, you can pre-order the book here.

[And today is my wedding anniversary. I am thrilled to be married to the lovely Phaedra Jean Taylor. She truly is my best friend.]


THE ARTIST & THE TERRAIN OF BEAUTY

THE NATURE OF BEAUTY
As a precursor to answering this question, I want to lay out a few ideas about the nature of the beautiful, because beauty is the terrain of real artists, and one way to recognize them is if they dwell in this terrain….

Thomas Aquinas gave a definition of the beautiful that is still helpful and relevant seven centuries later. The beautiful, he said, is “wholeness, harmony, and radiance,” and these define the terrain of the artist.

WHOLENESS
Wholeness means nothing is missing. All parts are present, suggesting completeness. No one looks at the Pietà and says, “You know, Mary needs just a little more fringe around her veil. Oh well.” Or, people don’t listen to Mozart’s Ave Verum and say, “Needs another high G in there. Oh well.” There’s something about these works that suggest completeness. Wholeness also means there is nothing extra, nothing gratuitous that isn’t an essential part of the whole. Isn’t that one of the primary complaints about so many movies? “Gratuitous sex and violence.” That is, too often there is no context for these things in a project, so it feels to the audience like they were just slapped in there to try and distract from some flaw in the storytelling. A beautiful work has nothing gratuitous.

And what do we get from wholeness? We are all creatures who have been cut off from our source. There is always a partial emptiness, a longing that can only be filled by divine love. As St. Augustine wrote in his Confessions, “You have made us for yourself, O God, and our hearts are restless until they rest in You.” We yearn to cleave to the One, and when we experience completeness, we have a sense of being at home and at rest. So the beautiful gives us a sense of peace….

WHAT THE TERRAIN OF THE BEAUTIFUL IS NOT

POLITICAL
The first thing we’ve done to wreck art is make it serve the political instead of the beautiful. I don’t necessarily meaning left or right, but statement-making, which is an utter perversion of the concept of radiance. The goal of statement-making is to manipulate, to coerce, to get people to vote a certain way, to propagandize, to merely change behavior.

I can’t think of a better example of this than in the awful statue of Mary that stands over the outside door of the $200 million Cathedral of Our Lady of the Angels in Los Angeles. It’s just dreadful. The statue is of completely uncertain gender, with a female torso, but harshly cropped hair and distinctly masculine arms and hands. In fact, my students call her, “Man-hands Mary.” But it’s worse than just androgyny. The image has black lips, Asian eyes, a Latino face, and other scattered Anglo features. When I first went on a tour of the new Cathedral, our guide said, “This statue was conceived so that people of all races would see themselves in it and feel welcome in this place.” And I said, “But it’s kind of ugly. I don’t know about you, but if you saw that kind of freak inviting you into its house. . . .” Well, the tour guide sniffed at me, waved her hand, and said, “The church is not about that anymore.”

It begs the question of whether Japanese people really do look at the Pietà in Rome and shrug, “Well, that’s okay for the white people.” But my point is that the goal of the statue was not to make something that would deliver the beautiful. The goal of the statue was to communicate a political message. The fact that it is ugly and makes my students mock it indicates that it has been a failure as a political vehicle too. In politics, you lose wholeness because the political only tells its own side of the story. As a result, people lose a feeling of rest.
Labels: Art Beauty Book Church

Rev. Brian R. Dixon said…
Thanks for sharing! Very much looking forward to the book. And, congrats & blessings to you both on your anniversay. As I read Barbara Nicolosi Harrington's reflections, I'm grabbed by the statement, "In politics, you lose wholeness because the political only tells its own side of the story." This rings true, and yet... isn't there a particular kind of ownership & authority & responsibility we have in telling our own story (bearing witness)? I think I can create space for another's story, listen to it with all my heart, humbly accept the invitation into it, honor it ...but I don't think I can tell it.
6:34 AM

w. david o. taylor said…
Brian, thanks for your note. I think what Barbara has in the mind, when she refers to the "political," is the kind of statements which are not only heavy-handed, but also seek to dissemble. That is, they represent their side as the *only* side and the other side as impossibly irrational or irredeemable. That's my sense, at least, from reading her whole chapter. I hope this helps.
6:57 AM