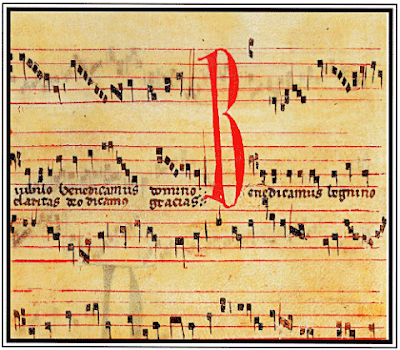 Last night Phaedra and I had the privilege of hearing the music of Anonymous 4. Their program was entitled "Secret Voices: The Sisters of Las Huelgas, Music of Thirteenth-Century Spain." As they explain in the program notes, the repertoire of "13th-century polyphony and sacred Latin song was collected for a convent of noble and aristocratic women." These nuns "sang the most beautiful, most advanced and demanding music from all over Europe in the 13th-century." Then the program added this historical note:

"Their convent, Las Huelgas at Burgos in north central Spain, was on the road to the well-known shrine of Sant'Iago de Compostela. Did these ladies send emissaries out to collect sacred music from England, France and Germany, or did pilgrims who stopped at their convent for rest and refreshment leave, as a token of their thanks, copies of songs they may have been carrying along? It will never be fully known, but there's no mistaking the international nature of this music." 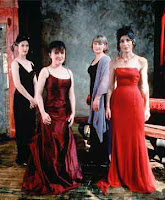 The pieces that our "anonymous" four women performed included Ave Maris Stella ("Hail star of the sea") and the gorgeously rendered In Virgulto Gracie ("In the Garden of Grace"). The program was divided into five sections: Dawn, Morning, Mass, Evening and Night. The music moved from polyphony to monophonic Latin song, and at different points they would sing all together or only two or, on occasion, a lone voice carried the hymn. Listening to this ancient song, echoing through Duke Chapel's vast neo-Gothic space, gave us a little glimpse of what it might have originally sounded eight centuries ago.

It also reminded me how easily liturgical music, that is "functional" music, can be turned into fine art music. Music that originally functioned to enhance prayer now becomes music which we "contemplate" at a distance. As an audience we clapped at the end of each section. Was that because we, like charismatics, clapped at the honor of God? Or did we clap because the artists excellently performed their parts? And did some in that room, devoid of any conscious belief in God, experience an intensely "numinous" encounter--with what? Did they taste God unawares? Did they feel the Kyrie eleyson and the Benedictus qui venit in nomine domini in their bones? Did some of us during that vesperal hour of song give our hearts to the musical notes while others of us gave our hearts to God through the notes? Through the text? Through both? What exactly happens to us when we hear irreducibly "sacred" music?

These are the questions that make art and faith anything but dull.

It was not all serious, though. One text they sang was a "practice" text. The "solfeggio" exercise was called "Fa fa mi/Ut re mi." With it the nuns practiced singing hexachords under the watchful ear of the music mistress. If they were going to be singing night and day, they might as well sing it right. I'm copying here the text, translated from the Latin, because not only did it make me chuckle, it also sounded like pretty good, theologically based advice for artists.
Duplum
Fa fa mi fa mi re mi
ut mi sol re mi ut fa fa
fa re fa fa re ut re mi ut re mi.
It is foolish to despise these
because they are the elements of music
according to the wisdom
which the holy ones have handed down.
Tenor
ut re mi ut re mi
ut mi re fa mi sol fa la
sol ut fa fa.
Sing out these and other such things,
you cloistered virgins,
golden nuns:
you are fitted for this
because you were born to cultivate polyphony,
the wisdom which the holy ones have handed down.

d said…
I am currently reading Merton's Ascent to Truth. He writes (and quotes):

We must ascertain what it is we love: God, or the pleasure. The end, or the means. The answer is to be found in the intention of our will. In what does the will actually rest? In what does it seek its ultimate satisfaction? If in God, then the pleasure it finds in created things is only a means. That pleasure is well ordered. It helps us to praise God. It sanctifies the soul. Here are the words of Saint John of the Cross:

When as soon as the will finds pleasure in that which it hears, sees and does, it soars upward to rejoice in God—to which end its pleasure furnishes a motive and provides strength—this is very good. In such a case not only need the said motions [of pleasure] not be shunned when they cause devotion and prayer, but the soul may profit by them and indeed should so profit... For there are souls who are greatly moved by objects of sense to seek God." (Ascent, Bk iii, c. 34)
7:30 PM