Killed a bird. Swam the river. The Pope of Protestantism. 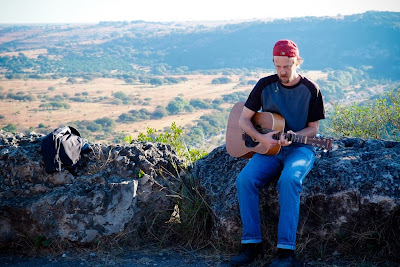 "The writer should never be ashamed of staring. There is nothing that does not require his attention." --Flannery O'Conner

I killed a bird last Thursday. I didn't mean to. It was a grackle, a bird that looks like a cross between a raven and a dove. When it sings it makes a harsh, unmusical readle-eak sound. They're scavengers for the most part. Iridescent black creatures, they troll our backyard for worms, pecans, or stale corn chips that we toss out at night. And they're the fowl brutes. We see them bullying the smaller bluebirds and cardinals off of our homemade water fountain. We don't like them.

But I'm not out to kill them either. I was having a bad day at the driving range. I had that "bad head" again--lazy head, lazy hands. My shots were whistling erratically across the range, one almost hitting a car in the parking lot. This time, I stood over the ball, pulled my swing back, and as I swung it through I lifted my head up just slightly, thereby causing the ball to rocket out in a line drive two feet above the ground. As I followed the line of flight I turned and to my horror saw the ball strike a grackle in the head, thrusting it up into the air. It was pure David and Goliath.

The poor thing hopped around mad. It looked like a charlie chaplin dance. I was horrified--and somewhere in my subconscious fascinated, like a seven-year old kid who hasn't yet figured out how nature and morality go together. I kept saying, oh no, oh no. Then it flopped once more and fell over. An older gentleman two mats over said, "Well, son, it happens sometimes. It's a golf range. They should know by now." I didn't feel better. In fact, things only got worse when all the grackle buddies, seven or eight of them, flew down and circled around the dead body. I thought, oh great, a bird funeral. I hope they don't eat him.

A few days later one friend looked me in the face and said: "David, well think of it this way. You hit a birdie." Then he laughed. I still feel bad about it. And seriously, what are the chances that my body's movement, the movement of the ball, and the flight of a bird all coincide? In the death of a bird?

If I were Flannery O'Conner I would write a short story that would make providential sense of the coincidence. I'm not. Instead I have the makings of a sermon illustration for which I don't yet know the meaning.

"I find that most people know what a story is until they sit down to write one." --Flannery O'Conner

This past weekend I joined a group of artists from far and yon for a retreat at the Laity Lodge. Loads of visual artists, some sharp musicians, poets, filmmakers. No dancers. One tin whistle player. We heard two solid talks by Murray Watts, a playwright and screenwriter who lives in the boondocks of Scotland at Freswick Castle. Great man. Good times were had by all at the LL. Here are a few pics. 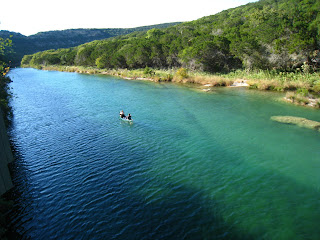 Two artists navigating down the Frio River. Yes, frio is cold. And yes, I swam it like a happy fish. 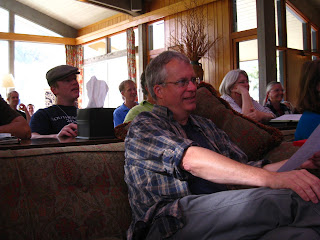 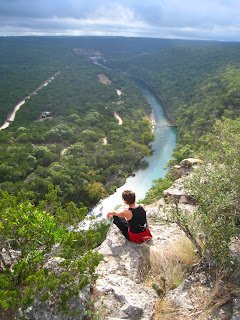 Printmaker artist Heather Parrish sitting on the edge of the canyon bluff. 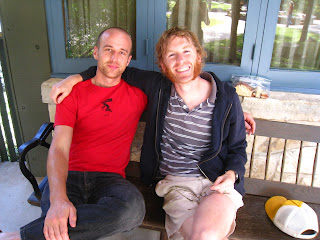 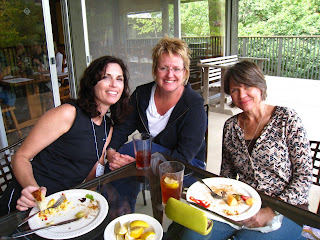 Kim Alexander (co-director of the Trinity Arts Conference), Laura Jennings (painter in Austin), and Terri Fisher (the woman who prays for artists, and boyhowdee do we need more people like her). 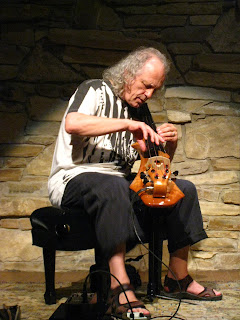 One of our featured artists, David Friesen, a jazz bassist who has performed with some of the greats: Stan Getz, Dizzy Gillespie, Joe Henderson, Chick Corea, Milt Jackson, Airto Moreira, and the list goes on and on. It was a great gift to hear such excellent jazz music. Go here for a nice excerpt of his music. 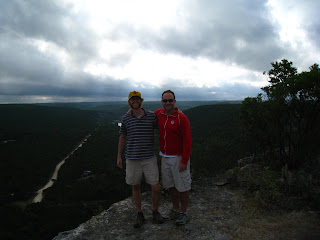 My good buddy Mike Akel and me standing over an overcast canyon.
The Pope of Protestantism.

"At its best our age is an age of searchers and discoverers, and at its worst, an age that has domesticated despair and learned to live with it happily." --Flannery O'Conner

Eileen Flynn, the religion reporter for the Austin American Statesman, is teaching a class at the University of Texas on journalism and religion. It's a class that once belonged to welterweight journalist Marvin Olasky. She asked me to come in yesterday to talk to the students about evangelicals and the media. I said yes. At first I was nervous. I spent a whole day re-reading material I'd prepared for the Statesman a few years back. I wrote a four-page handout. I asked friends to pray. But still, I had the willies.

I decided I needed a way to ease in. I would give them a pop quiz. Three questions to suss the class out and calm my nerves. I gave them 1 minute to write an answer for each.

1. Tell me the difference between the term evangelical and evangelistic.
2. Define the term feminism and give me an example of somebody you believe truly represents it.
3. Who is the pope of Protestantism?

And once we got going with the quiz I relaxed and felt free to tell a few bad jokes and go with the flow. I told them that the first question was about the importance of how we define and use our terms (something Bill Maher doesn't seem to care a lick about. It's just fun and games and a bunch of ridiculous religious people. See here for Salon's very curious review). The second was about landscapes and a reminder that "in the vineyard of the Lord there are many grapes, each claiming to be the true grape of the Lord." And the third was to draw their attention to the trickiness of figurative speech.

One guy, in answer to #1, said, "One letter." Sure thing: an eleven-letter word vs. twelve. One gal answered #2 by giving herself as an example. When I moved on to #3 I got a long silence. I threatened to call on someone. One student finally raised his hand and said, "There isn't one." I laughed and said, "Good answer. Anybody else?" Another silence. Then a girl said sheepishly, "Jesus?" I smiled. "Well, in one sense, yes. He's the great shepherd of the sheep. Anyone else? Ok, keep thinking outside the box, non-literal stuff." Then a bearded fellow who works at WholeEarth raised his hand: "Billy Graham?" "Bingo," I said, finally landing at my desired answer. Naturally the nearly 90-year old grandfather of neo-evangelicalism would shiver at the appelation, but hopefully he would also take it light-heartedly. For many in the fold, he functions de facto as the authoritative padre.

In any case, the point was to get us thinking about the challenge of reporting on religious language and people. It's not easy, I know, and I assured them of my respect for their wanting to do good work. With less than a month till our national elections we're witnessing plenty of reports on the ole evangelicals, some sound, some stupid and sloppy. Plenty of mitosis has taken place in the evangelical community since 2000. I admire Eileen for her desire to want to teach this young bunch of journalists-in-the-making. It gives me great hope.

In the end I was grateful for the opportunity. It reminded me how much I love teaching. Towards the end, during the Q&A, I found myself narrating my experience of losing and then re-finding my faith in Jesus during my years at UT. It was the strangest thing to hear these words coming out of my mouth, but also exciting.

After their pop quiz I told them that when I was a student it would have meant a lot for my self-esteem if the professor had given us Snickers bars. To make sure they didn't leave college without the pleasure, I pulled out a Halloween-inspired "super bag" of Snickers. I passed them around and asked that the bag be entirely consumed. What's the point, I figured, of talking about things that make you crazy--religion, politics, the media--if you can't have a candy bar to enjoy the experience.

tamarahillmurphy.com said…
i'm still "snickering" over the dead bird story...it is absolutely cracking me up!
8:17 AM

Marcus Goodyear said…
I'm glad you enjoyed Laity Lodge! I wish I could have been out at the artist's retreat with you.
2:20 PM

w. david o. taylor said…
Mark, you won't be reading this comment any time soon, or at least you shouldn't be, but congrats on your socialnetworkingbloggingwriting fast. I think it's awesome. Truly. Awe-some. Cleanse the system.
3:41 PM

flannery o'conner said…
if you had a job you wouldn't have killed the bird
8:10 AM

w. david o. taylor said…
Dear Flannery from the dead, as the great Merovingian has said: Kaws and ee-fect, mon ami, kaws and ee-fect.
8:25 AM

thegreatMerovingian said…
Mon Ami, the great Merovingian wants you to get a job too
8:41 AM

d said…
In response to the unbelievable-but-it-actually-happened Grackle Skull Smashing, I'm reminded of a few points from Bruce Mau's "An Incomplete Manifesto for Growth":

Point 1. Allow events to change you. You have to be willing to grow. Growth is different from something that happens to you. You produce it. You live it. The prerequisites for growth: the openness to experience events and the willingness to be changed by them.

Regarding getting a job, I'd recommend against it.
9:57 AM

w. david o. taylor said…
I like that. It's like Covey crossed with Confucius. Now all I'll have to do is figure how to apply that to my plunging stocks.
3:58 PM

d said…
I should clarify. Bruce Mau is a [rare] designer whose Incomplete Manifesto for Growth, while personal, is largely pointed as his design work, and more specifically, at his design studio. It's largely, at least for me, an encouraging guide to maintaining a creative life and especially so in light of the temptation to commodify (and then be forced to serve) everything we put our hands to.
9:52 AM

w. david o. taylor said…
Very helpful, explanation. Thanks for that, and I look forward to printing out his manifesto and being inspired by that kind of freedom of process. Curious. Does the "d" stand for something or is it another one of our masked heroes in the form of a D?
6:36 PM