Day 4: When Writing Only SEEMS Dumb & Dull But That's Only Because You Have a Bad Attitude and Want to Cheat by Using Your "Work" Writing as Your Entr

(NOTE: That's the longest title I've ever tried to write on my blogger and they cut me off at "Entr," which is supposed to read "Entry," and then I was going to put, "And Your Wife Says It's Not Fair, She Has To Draw Something, So You Should Have to Write Something New Too." That's a totally marketable title.) 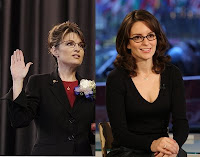 (NOTE #2: I confess I feel a little indulgent and un-civic for not writing about politics these days. There's plenty of it and it's all quite important, but all I can think of is, "Sarah Palin completely looks like Tina Fey, and I bet I'm not the first person to notice that," and "Barak Obama really is good looking and a sharp orator." I studied international relations in college, so I've plenty of opinions about US foreign affairs. Puh-lenty. But I'm going to trust that a lack of opining on this blog does not indicate a lack of seriousness about current political activity, simply a sign of one of the limitations on my energy.)

I feel tired, tired of being tired, and I feel reluctant to write anything worthless. Not in the sense of self-esteem worthless, I mean pointless worthless.

You’re writing because you gave yourself the challenge to write something every day for 30 days. That’s why you’re writing. It’s not pointless.

Ok, fine, not pointless, but un-interesting.

Oh really? What you’re working with here is starting to sound interesting.

Yes, and increasingly self-conscious. “I’m writing about not wanting to write and now people reading this will say, ‘Oh, I feel exactly the same! Gosh, thanks for making me feel like I was not the only one. Your vulnerability is helping me be vulnerable. You're the best, David!”

Ok, fine, from paragraph one to paragraph two this entry has now become interesting for me, in particular because I don’t know where it is headed. But it’s this close from turning into something worse than pointless: cliché. (Is that how you punctuate that sentence? Hm.) Blah, blah, blah, you’ve got writer’s block, blah, blah, you’re feeling bad about yourself, blah--boring.

Ok, fine, I will. But one thing you can’t take from me—you being Ernest Hemingway, Flannery O’Connor, Philip Yancey, Alice McDermott—is that this is my experience. Granted. But does it not seem well-trod? Is it not the path of the young apprentice and therefore only interesting to other apprentices? Sure. Does that make me feel small and insignificant?

Do I have to answer that question?

Ok, sure. It does. Why? Because I want to join that company of writers represented between the m-dash in the paragraph above.

Do you? Do you really? Are you willing to sacrifice the same amount of time, energy and money to become that? Hm. Maybe not. Maybe so. Ok, then, now is the time to quote something you’ve said before about talent, because that will also help you determine, at one level, whether you’ll ever join The League of Extraordinary Gentlemen (and Women).

WHAT IS YOUR ARTISTIC NATURE?
By nature I am both free and unfree to pursue my art. For example, if I love singing but do not have strong vocal chords or a good musical ear, I am free to sing as loud as I want in church (for surely God loves a joyful noise) but I am not free to pursue a career as a music composer (surely again God gave us common sense). If I'm color blind, there's no point in my looking for a job as a color correctionist at the Warner Brother Studios. Green is good for martians, not for natural human skin.

For me personally I love to write plays. I’ve written everything from a satire on the advertising industry to a historical fiction on Adam and Eve post fall. But at the tender age of 36 I am not under any illusion that I have the natural ability to create storylines and poetic word-games at the level of William Shakespeare. I can't. Nor, even though I'm a "writer," do I have the aptitude to write a novel like John Grisham or Harper Lee--or like any novelist. I simply can't write novels; or if I did they’d be very, very bad ones. So it’s best that I humbly recognize my writerly limitations, even while I push myself to keep experimenting and growing as a writer.

The matter here is one of good self-knowledge and the humility to recognize my strengths and weaknesses. In humility, then, I will allow myself to keep exploring my particular niche within the artistic/writerly community until I find it, or at very least get as close as I can to it.

Humility. Ah, yes. Humility. Hummus. I had some good hummus at my sister Christine’s last night. Phaedra and I took care of the four kids--ages 10, 8, 5 and 3--while she taught an "English and Composition" class at St. Edward’s University and Cliff (rector gallant at Christ Church Anglican) performed minor works of pastoral salvific-hood. The hummus was tangy just so. But then you add all the vegetables the kids ate for snacks and the multi-green, live-enzymed, feta-cheesed salad they ate for dinner in combination with HEARTY black bean soup and whole grain rice plus watermelon and grapes for dessert—well, as you can imagine, there was a lot of tooting happening in that house (but not by the adults, or at least we’re not willing to admit it in this public context).

Humility is that ability to accept that I’m this close to being a heroic and outstanding and utterly brilliant human being—vibrant and impressive and all things dazzling —good-looking and funny and smart--and so much more!--the kind of person that people would stop on the street and say, “Can I touch you? Just one touch? You’re beautiful.”—except for the small fact that the Almighty has given me limitations that reduce me to being a mere mortal. Limitations. A mere mortal. Ah, yes, I saw it coming. Enter stage right: C. S. Lewis.

There are no ordinary people. You have never talked to a mere mortal. Nations, cultures, arts, civilizations--these are mortal, and their life is to ours as the life of a gnat. But it is immortals whom we joke with, work with, marry, snub, and exploit--immortal horrors or everlasting splendours. This does not mean that we are to be perpetually solemn. We must play. But our merriment must be of the kind (and it is, in fact, the merriest kind) which exists between people who have, from the outset, taken each other seriously--no flippancy, no superiority, no presumption. And our charity must be real and costly love, with deep feeling for the sins in spite of which we love the sinners--no mere tolerance, or indulgence which parodies love as flippancy parodies merriment. Next to the Blessed Sacrament itself, your neighbor is the holiest object presented to your senses. If he is your Christian neighbour, he is holy in almost the same way, for in him also Christ vere latitat, the glorifier and the glorified, Glory Himself, is truly hidden.

So what is it that I really want? To be as talented a writer as Hemingway or Buechner? Sure, at one level. But if God has not gifted me with the kind of imagination and intellect that would produce comparable prose, then it is not mine to grasp; or I do so only to my own harm.

Should I try with all my soul to become the best writer possible? Absolutely. You can always try. That will give God great pleasure.

Well, I thank God that I've met quite a number of good souls like that. They're mostly over 60. And sometimes they hang out during the month of March in the hill country of Texas. They're writers, in the "gifted and talented" department. But they're the kindliest, jolliest bunch. And one time I happened to be there at the same time, myself and a few of my artist friends from Austin, and on the last breakfast we shared together we lobbed limericks back and forth at each other as if we were a bunch of kids. Fellow pilgrims. Immortals.

I've commented a couple of times, and just wanted to let you know that I've moved into Austin.

My wife and I checked out Hope Chapel because of this blog, and are not sure that it's the best fit for us, church-wise. Nevertheless I thought it'd be nice to hear from a local and find out about ways of getting involved. Is there any way to get in touch with you?
12:01 AM

(hint: wait until you are trying to procrastinate writing)
9:06 AM

w. david o. taylor said…
Dear Chestertonian Rambler: First off, welcome to Austin. Second, you can email me at the following address:

I'd be happy to make suggestions for a church community in light of your background.

Tamara: such a beautiful short film. I think your link was missing a few numbers at the end?

well, yes it was missing numbers! i have no idea which film you watched, but try this again. it's titled "procrastination"

(geesh...i'm getting a little bit insecure writing comments on your blog!)
10:51 AM

tamarahillmurphy.com said…
and I see that the numbers have been deleted again...oh, well, must be blogger doesn't like my link....
like i was saying, have a happy, productive day and don't procrastinate writing by watching short films about procrastination.
: )
10:52 AM

micah said…
and how much of writing is just working at it, doing it, just writing; and how much is talent? write. just write. even if it's bllaaaaahhhh. or feels/seems blaaaaahhhhh. quantity. didn't art and fear say that the more pots potters made the better the pot? and those who spent all their time crafting one.... it just wasn't as good as those who produced more.

personal pep talk from someone who desires to be an O'Connor but doesn't know if I'll ever measure up!!!!
12:05 PM

w. david o. taylor said…
Tamara, you're quite alright in the commenting department. At least you're a lurker with a name. :) I'll look for the "procrastination" film. I ended up watching one about a printmaker dude. Very impressive.

Micah, yes, good words from Art & Fear. Keep at it. And keep sharing your work with your trusted friends.

Be like an apple tree: every day growing a little more apple tree-ish, a little truer and fuller. Every day--something.
1:08 PM

MBPCPA said…
If you write enough words that you hate, eventually out of sheer angry orneriness, you will write something that you love, that you are truly interested in saying.
How many words? 1,000? 1,000,000? YMMV, that's the risk and the rub.
9:44 PM