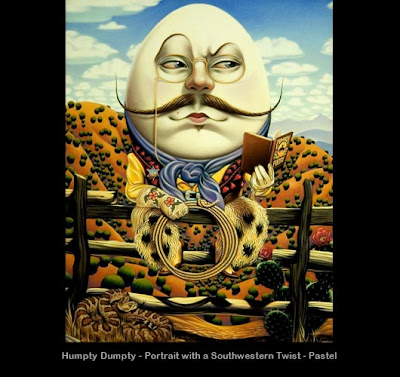 This writing challenge is becoming a drag and a boon. Out of the last ten days, seven I've found myself at the wee end of the night, a total sloshy noodle, with desires only for my pillow, then: bing! The bell goes off in my head. The bell. I have to write an entry. "Phaedra, I have to write an entry. Aichihuahua." Aichihuahua, she says back to me, because she too has left her daily drawing to the end of the day. We both feel the inconvenience of our commitment.

But it's also been a boon. I've found myself journaling about things that might have been left un-recorded were it not for this forced regiment: sex, golf, money, a fractured relationship, the last line that Jack Black's character speaks in the movie King Kong--the usual male interests.

For today I want to make note, in honor of Andy Crouch's fine book Culture Makers, of ten artists who are making artistic culture worth knowing about. Let's start with Andy himself.

I've really enjoyed reading Andy's latest. It has a nice gentle, narrative tone about it that keeps me leaning forward, curious, and encouraged while also challenged. A constant refrain that drives his thesis forward is this: What does it mean for us humans to make sense of the world by making something of the world? If culture is what we make of the world, he argues, then we are making two kinds of things: meaning and stuff. I like the way Andy puts it on page 35:

"Without the task of gardening--cultivating, tending, ruling and creating using the bountiful raw material of nature--the woman and man would have had nothing to do, nothing to be."

Put that way, there's a sudden but also humbling "Of course!" to the obviousness of the point. There's also a feeling that Christians who think of our human vocation exclusively in terms of evangelism and getting folks to heaven and then, un-encumbered by material flesh, singing God's praises throughout eternity--and by singing, we mean singing literally, not figuratively, because that's mostly what gets center stage in the book of Revelation--they've simply hurried past Genesis 2:15, without really paying attention to the concrete reality of God's act, and dismissed it as un-important. Andy, with a persistent grace, forces us to pay attention to it again and again.

He also has a great commentary about omelets. But I'll let you experience the yumminess of that thought for your own by letting you read the book.

And I was not paid a dime to make that statement.

I first met Brian at the Transforming Culture symposium here in Austin. I met him a second time at Steven Purcell's wedding this past August. Brian is a hard guy not to like. He's got a lush beard and a Saint Nicolas-like smile. His day job involves leading worship, music and the arts at John Knox Presbyterian Church in Seattle. His night job has him moonlighting with all kinds of imagination-deepening, church-strengthening, artist-loving projects. See here for his website (you can see the kindly face for yourself). For all you Michael Card lovers, Brian has joined forces with the Card himself and made some pretty sweet music. Hear here for a sample. 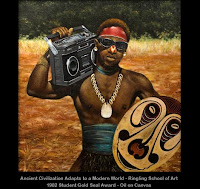 Gregory is a Jesus-loving, off-the-radar nut who looks like the most beautiful North American Indian man you've ever met, except he isn't Indian. But his wife is, and she's gorgeous. They're both nuts, and that in the best sense. They hung out with us at Hope Chapel for a few years, which is how I got to know them. But then, like a wild wind, they were off. I'm grateful we've remained friends.

Gregory has his art hanging up in one of the hip coffeeshops here in town, Thunderbird's. But I'm telling you, it's crazy. There isn't any CIA-You'll-Never-In-A-Million-Years-Guess-I've-Got-A-Thing-For-Jesus anything about his work. (And trust me, I'm all in favor of believer artists making all kinds of non-religious art. About a frijole or Sputnik, it doesn't matter. It all comes under the Kingdom. But some folks try just a little too hard to mask their Christian identity and I wonder if it's not wasted energy.) Most of Gregory's art is religious in subject matter and psychadelic. You walk in and there's all this Jesus looking out at you. I cracked up the first time I walked in on it. I thought, "Gregory, you're a brilliant son of a gun." The work is so good, you can't dismiss the content.

Some of the regular customers were so thrown off by it that they asked the owners if this was a Christian coffeeshop. Ha! A far cry. But the owners were bold enough (and smart enough) to recognize a great craftsman. See here for Gregory's portfolio. And no, none of his work is aided by photoshop. He paints everything by hand. The man is a rare species, whose clients have included the NBA, The Wall Street Journal, and the Santa Fe Opera. For starters.

I've not met him personally, but my father just returned from a visit to India and came back with rave reviews of Stefan, who heads up a gallery in New Delhi called "Reflection Art Gallery & Studios." It's a space, he writes, "dedicated to showing and creating art that affirms life and dignity. In a world where art is increasingly commercialized we recognize the place for 'art with a conscience' and the role of the artist in 'holding a mirror' to society." Stefan recently participated in a show (see here) dedicated to the "missing women" of South Asia, a phenomenon, he explains, of mass "female foeticide." I hope one day to meet Stefan. He's an artist making work in a difficult context. I have the greatest respect for folks like him.

5. Brian Schrag, Wycliffe Arts Consultants, Dallas, TX
Speaking of arts in a cross-cultural setting, Phaedra and I dined with the inimitably witty Brian Schrag over grits and cheese in Nashville. He told us about SIL's (Summer Institute of Linguistic) new efforts in bridging cross-cultural research and the arts. They write:

"Wycliffe is expanding its work in ethnomusicology to include other performing arts along with music. Arts consultants work alongside local musicians, dancers, actors and storytellers to spark the creation of new songs, dances, dramas and stories that communicate God's message in powerful ways." 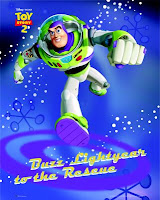 If you ever doubted the power of art to literally save a human life, doubt no longer. Read here how Buzz Lightyear's motto, "To infinity and beyond," helped a father keep his 12-year-old autistic son's spirits up as they treaded water in the shark- and jellyfish-infested waters off of the Florida coast--through the darkness of the night. Quite an inspiring story all around. And thank God for the counter-culture, life-affirming, culture-making art of Pixar Animation Studios. 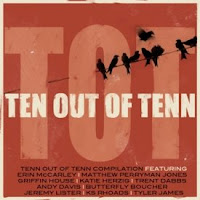 Charlie Peacock gave us a copy of this multi-songwriter album and it has become our favorite car music for the past two weeks. See here. The music is fresh with a combination of quiet, melodic songs and big, gregarious, elaborate orchestrations. We highly recommend. Purchase at a music store near you. Read here for a review in Paste Magazine.

8. Sonseed, "Jesus is my friend," early Christian rock music, circa 1974?
Last but not least I bring you, courtesy of my friend Travis Hines, a musical tour de force (here). You have not lived until you have witnessed the early years. Laugh all you wish, but it could have been you--or your dad. I'm including a sample stanza here. My only question is: Are they Canadians?

Once I tried to run
I tried to run and hide
But Jesus came and found me
And he touched me down inside
He is like a mounty
He always gets his man
And he’ll zap you any way can
Zap!

tamarahillmurphy.com said…
to do:
read DT's new post - check;
order Andy Crouch's new book - check;
listen to Ten of Tenn on their MySpace - check;
shout with glee that I now know the artist for those cool Amer. Express ads - check;
laugh my head off at the Sonseed video - check;
remember why I'm doing what I'm doing - check;

I look forward to being with your church in October where the weather will bless our soul and our socks by not being in the upper 90s. And there will be deciduous trees.
9:04 AM

w. david o. taylor said…
Kathy, I'd be stealing Andy's thunder by attempting a lengthy answer to your question. But suffice it to say, our calling to make culture begins in Genesis 2:15, "The Lord God took the man and put him in the Garden of Eden to work it and to take care of it."

By itself the garden and its environs is wild nature--the good kind of wild, or at least the wild that's supposed to be wild. But when God commands the man, and by implication the woman, to work the garden, at that point the garden comes under the culture-making husbandry of human skill and imagination. The garden is cultivated. It is given shape and purposes beyond itself.

In the white spaces of Scripture we can guess that Adam performed all the functions of culture. He studied carefully the garden's properties (science). He made instruments to help him accomplish specific tasks, such as hoeing and cutting (technology). He kept records which he would use to teach his children how to follow in his cultured steps (education). Maybe he felt deep emotion at the sight of his first pumpkin and found himself goofily mumbling a song (art). Well, so on and so forth, that would be how the story would unfold if the writer of Genesis had been interested in that part.

Andy very simply and persistently reminds us of the obvious: that before the Fall and the subsequent mission of redemption--that is, to redeem what God has created in the first place--there was loving relationship-building and the making of stuff and the making of meaning out of both.

As evangelicals we talk so much about God as Redeemer that I think we forget what exactly He's redeeming. According to Saint John, it's the cosmos: the whole of it, including that original job of ours to "dress" the garden and to "keep" it (KJV).

And that's how I'd answer your question if I restricted myself to the comments section of a blog. But there is more. And that, among other things, is why Andy wrote his book.

Karen said…
Thanks for the suggestions of the artists. That last video is hilarious!
2:47 AM

Unknown said…
Oh so classic. I just had a friend show me the "Jesus is my friend" music video last week. It had me rolling on the floor.
5:11 PM

tamarahillmurphy.com said…
Oh, yes! You are going to LOVE NY in October. Our church is surrounded by those "deciduous" trees and overlooks a valley -- including a "little white church in the vale".
Bring your camera.
And pray it's not raining.
: )
5:23 AM

Solshine7: thanks for all your encouraging comments.

Taylor: great to see you and Allison at church today. Can't believe we're just getting to know and like you quite a bit only to lose you to the Sudan. But we're proud of you.
11:08 AM