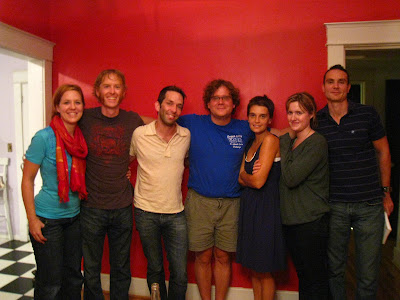 You know you’re in Nashville when 3 out of 4 people have long fingernails on their right hand. I met Steve Mason (pictured above), lead guitarist for Jars of Clay, over dinner and there it was: quarter inch long, guitar-picking nails on the hand that makes the alt-rock throw down. Ditto for Sarah Masen. Ditto for Julie Lee. Ditto for Ahna Phillips. Ditto for Scott Hawley. Ditto at the Frothy Monkey coffeeshop. Ditto at Church of the Redeemer (AMIA) church (home to the sassy Steve Taylor). And that’s just a small dinner party on an un-eventful night in Nashville and a handful of outings.

You also know you’re in Nashville when the window clerk at the Country Music Hall of fame says, “Would you like to visit Studio B? Amy Grant is recording there at the moment.” Yes, I had a crush on her back in the late 1980s. She was hot. That wind-swept, permed, high bangs look. Hot. Totally hot--every heartbeat hot.

Phaedra and I thoroughly enjoyed our time in Nashville. What a great city; better than you might suspect at a distance. We met the loveliest people. Here are a few of the highlights. 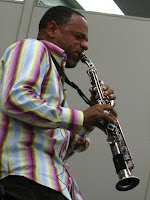 I sat in Kirk Walum's breakout session at the ACT conference. Having played seven years with Whitney Houston’s band I figured he couldn’t be half bad. He was stellar. And funny. “Don’t be sending me no evangelicals with no trash,” he told us, referring to his evangelical brethren who refused to get in touch with the trash in their heart and so let their music speak honestly from that place. “I need somebody who feels it.” His own confession: he hadn't felt it in the early years, he'd “preached” it. “I would say stuff about abortion on stage—on 6th street in Austin. That’s crazy!”

But I loved what he had to say about his vocation. He called it being “in the woodshed.” The woodshed was the practice room, closet, studio. After many years of struggling to make sense of this craft, which often involved simply “fiddling around” with sounds (aka improvisation), he eventually made peace with both the instrument and God. “Being in the woodshed is not extra, it’s my ministry to God.” Rehearsing is essential, he said. "It is my way to freedom."

He also said good improvisation required you to be unafraid. You have all the notes in the galaxy to work with, but you still have to step out into the void and trust—trust all you’ve rehearsed, all you’ve listened to, all you now know in your gut about good music, all the folks around you. “We jazz saxophonists close our eyes not because we’re afraid of the audience but because we’re trying to listen.”

As he played his soprano saxophone for us at the end of the session, eyes squished shut, cheeks swelling, the music swirling, meandering, I felt lucky. The music was a little bonus at the end of a long, tiring day of conferencing. The play was gratuitous. “God’s the ultimate jazz musician,” he’d said earlier, God playing creation into being, an act of gratuitous love. Kirk Whallum--gentle, mirthful, fabulously talented, perfectly fluent in French, accompanying the likes of Barbra Streisand and Quincy Jones--plays a little made-up ditty for us. My soul was happy.

At dinner with a delightful cautionary note: Bethany Torode 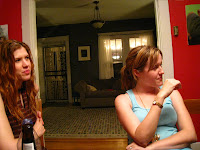 In Eileen Flynn’s article about Natural Family Planning in the Statesman a few weeks ago she had quoted the cautionary observation of Sam & Bethany Torode.

"Our personal experience in the past five years has shown that we had a lot to learn about NFP, and that there is a dark side we weren't aware of."

So you can only imagine how loud I laughed when, standing in David & Sarah Dark’s kitchen, I am introduced to . . . drum roll . . . Bethany Torode (pictured right, Ahna on the left). Bethany lives on the other side of the Dark’s back yard; so it was just a small hop into the lively soire.

Like so many moments during our time in Nashville, it felt like Providence playing a good joke--for no apparent reason than the divine humor. What, really, were the odds of all of us landing at the same dinner table in a city far away?

She shared with me a little of the turbulent aftermath of their official recanting. It made me a little sad to hear. Christians can be mean and merciless. Well, I honestly don’t know if there is a great meaning in us sharing a long evening of bean soup, beer, and conversation, but I do find it curious. A name that was only a name in a newspaper article now had a face and a sound in her voice that make all the difference in what things mean. 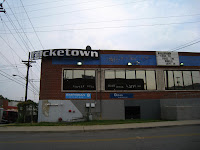 On Saturday, August 16, about thirty men and women from an array of church, para-church and academic organizations gathered for an all-day event to answer the question: How can our respective organizations think and act more missionally in regards the arts?

I'll probably need to write a separate entry on all we discussed and imagined, but suffice to say a fruitful, though endurance-testing day was had by all.

I was very encouraged to hear all that is happening around the world in regards the church and the arts.

- The Tipping Point: How Little Things Can Make a Big Difference by Malcolm Gladwell
- Letters to a Young Poet by Riner Maria Rilke
- The Medici Effect by Frans Johansson
- Four Cultures of the West by John O'Malley

Charlie (Peacock) and Andi Ashworth
We had the loveliest time with Charlie and Andi. Their home is a restored Methodist country church, built originally in the 1920s. They've restored it and added spaces in order to offer hospitality to artists. It's one of the most beautiful home spaces we've ever been in.

Phaedra and I have the greatest respect for Charlie and Andi. They're both humble, thoughtful, book-loving, generous, quick to listen and to ask good questions, familiar with suffering folks. Both have written books that deserve careful reading: New Way to be Human: A Provocative Look at What it Means to Follow Jesus (Charlie) and Real Love for Real Life: The Art and Work of Caring (Andi).

If they'd take us, we'd adopt them as our Nashville surrogate uncle and aunt. Here are a few pics of our time together. 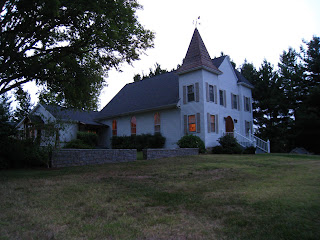 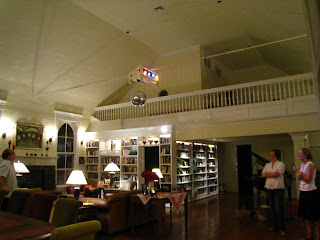 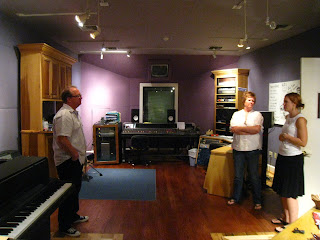 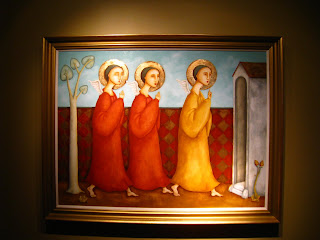 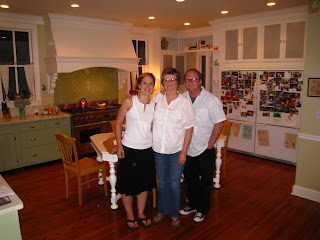 PS and completely un-related to anything I've written in this entry: I realize this is a little dicey for me to do on a blog primarily devoted to all things artistically and ecclesially noteworthy, but I have to say: Donald Miller is one funny guy: here. Whatever we think of his decision to pray at the DNC, you can't accuse him of not having a sense of humor. Here's an artist-writer who's not afraid to be more than just an artist-writer. Again, apart from our feelings about his decision to pray or to make his opinion known on a range of political issues, I respect him for his willingness to actually participate in the civic life of his own city.

Many of us artists are afraid, myself included, or don't know what to do, or are un-willing to get our hands dirty with the hard work of seeking the peace of the city. Donald Miller is not one of them. Nor for that matter the good people of All Souls church in Knoxville, TN. Nor actually a growing throng of younger artists. But that's a story for the next blog entry.

Bethany Patchin said…
There is great meaning (or at least healing) in sharing beer & long conversation. It was good to be with you all and to be feeling the love. (And if you ever want to know what the Eastern Orthodox think about birth control, I can give you the run-down, since I'm a convert-Greek Orthodox apostate.)
8:45 AM

w. david o. taylor said…
Bethany: halo! And greetings through the blogging ether. I'm glad to have shared the meal. And yes, I'd love to hear what the EO think.

One question. When you say, "convert-Greek Orthodox apostate," does that = an evangelical who converted to GO who is now regarded by some as apostate? Or does the phrase run a different way? Either way, I am curious in the EO opinion.
7:20 AM