An Invite to a Visual Arts Summit 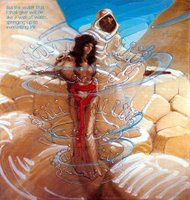 Well it looks like I just got a friendly invitation to a What's Up With the Visual Arts in Christendom event. I guess you can say I'm pretty surprised and humbled. It catches me off guard, honestly. I'm down here in Austin mostly minding my own business, happily occupied with the business of pastoring, meeting with people, listening to their lives, providing them with resources to make sense of their artistic identity, walking with them through the crap, the durm und strang of daily life.

Then lo, I get invited to hang out with scholars, theologians, museum directors and practicing artists to talk about "the future of Christian involvement in the visual arts." Very fascinating.

My questions are who is the audience and what are the parameters for discussion and who gets to decide that? Is this for Protestants only, or will Catholics and Orthodox be included? The discussion will vary drastically depending on that answer. Are we talking about the visual arts in the contemporary art scene, in the public square, in the church? It's a vast trek of land if we try to tackle all three.

This strikes me, in a good way, as quintessentially evangelical behavior, to initiate activity from the bottom up. The concern is not for "official Church praxis" but for "Christian involvement." It's grassrootsy work of the people. Its authority, I guess, will be inherent: either the results and proposed activity of the summit will persuade or or they won't. They'll catch on or they won't. A lot of theological and traditional and cultural commitments, or assumptions, will make the conversation anything but boring.

It's exciting, though. As a working pastor, I'm deeply interested in the nature and function of the visual arts within the corporate life of the church. I'm interested as much in the epistemological as the devotional and missional implications of a vibrant visual faith, to use Dyrness's title. My prayer has long been for a strong Church that reflects all that God intended for us in our sacramental experience of Himself and our shared world. Veremos.

They've offered to pay all travel and lodging expenses, so I don't imagine I'll say no. God help us. Anyhoo, here's part of the note.

On behalf of the Calvin Institute of Christian Worship and the Brehm Center of Fuller Seminary (and in cooperation with the Center for the Arts and Religion of Wesley Seminary and Christians in the Visual Arts * CIVA) we would like to invite you to a Visual Arts Summit at the Prince Conference Center on the campus of Calvin College, Grand Rapids, Michigan, March 18-20, 2007.

The Summit is planned to facilitate substantive conversation about the future of Christian involvement in the visual arts. The purpose can be stated in the following three propositions:

(1). The Christian presence in the visual arts has made remarkable headway during the last generation, so that one can begin to point to respected artists, exhibitions, organizations and so on reflecting deep Christian commitment.

(2) This presence moreover has been realized in a number of very different constituencies, all of them important but seldom in regular conversation with each other.

(3) We would like to bring a small number of important representatives of these constituencies together for a common conversation about the future prospect and dreams of Christian participation in the visual arts and, more importantly, ways in which these various groups can work more closely together. This third area will include asking what we have done well, what remains to be done, what obstacles exist to realizing things we dream about, and how colleagues in the other groupings can assist us in accomplishing our goals.

You are being invited as a representative of church leaders and pastors. The other four groups represented will be: scholars and researchers, theological educators, practicing artists, and directors and leaders of museums/galleries/organizations.

Hope you can join us!

susan biencyzcka said…
interesting... hey what happened to part 2 of the smoothie blog? it's a cliffhanger!
4:45 PM