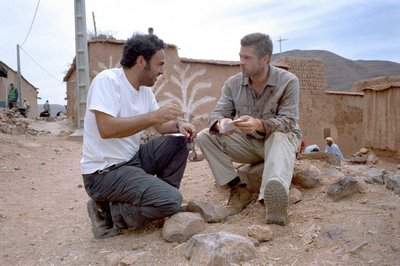 I saw Babel last night. It's the new movie by Alejandro González Iñárritu. I loved his previous two, Amores Perros and 21 Grams, which, to our pleasant surprise, he called parts 1 and 2 of his now finished "family" trilogy. He was at the screening, at Barton Creek Cinemark. Running at a crisp 142 minutes, the film is anything but family friendly. It features violence, sexuality, death, drunkenness, drug-use, loads of anger, loads of angst, harsh language, all very biblical. Be fairly warned.

But it was profoundly truthful--in a way that makes Jeffrey and me feel set free.

The Mexican nanny loves so much that she ends up losing the gringo kids she's mothered since they were babies. The frightened, angry Moroccan desert kid loves so much he gives himself up to the police to save his family because he knows he's guilty. The deaf Japanese high school girl loves so much she hurts, in a very naked way, at never being loved back, ever. The American tourists (Brad Pitt and Cate Blanchett) love so little by barely holding hands, just barely.

Jeffrey Travis got free tickets for us to attend the special screening. We're both fans of Alejandro's work. But we're under no illusion that they're easy films. If we had to, we'd tuck them somewhere between 2 Samuel 13 and 2 Samuel 20. We don't know if we'd call them Christian. They don't resolve. They leave you restless, but somehow also cleansed, or maybe cleansing, like a master cleanser, if you're willing. They're very beautiful.

"I love the openness of things," he told us last night. "Life is like that: you never know how things will turn out." We're on the way.

"What's your inspiration?" one woman at the back asked.

"I've learned from life," he answered, "it's my source of inspiration, interpreting life." Making sense of things, what artists do.

"What were you trying to highlight?" another fellow asked.

"We have borders inside us," he said. "We judge easily. Our society is losing compassion . . . we all share pain . . . I wanted to get to a place of compassion."

It's something I hear a lot of contemporary artists say. But they usually use the term tolerance. He never used it once, thank God. It's not a biblical term. I don't think he's a Christian but I'm glad he didn't use the T-word. I can't stand the T-word, not since J. Budziszewski showed me the light back in college. It's so infuriatingly mushy. It's fuzzy-headed, self-protective nonsense 95% of the time. Compassion is different. It's the ability to suffer with someone else, really suffer. Jesus was compassionate. He wasn't tolerant. Not of the Pharisees. Not of his family. Not of Peter. Not of any of us. But he was compassionate. To be angry and compassionate, that was the trick.

I'm marrying a rocknroller and a social worker tomorrow afternoon. It's at the fancy Allen House downtown. We're really hoping it doesn't rain. Outdoor weddings don't do well in the rain. I haven't yet finished my homily for the service, but I'm talking about the impossibility of marital love.

Why am I telling you this, today, on your happy wedding day? Because I don't want you to be duped. Don't be foolish. Your good intentions won't help you one lick. You're about to make a covenant with each other, get out of the fog. It's a covenant, not a contract. Your wedding should not be confused with fuzzy feelings of happiness. TV love is moronic love. Magazine love, movie love, Top 40 love, it's all an elaborate and expensive crock. Run as fast as you can away from TV love. This isn't TV love we're doing here. This is supernatural, divine love, the most satisfying and most awful love you'll ever taste.

IMMORTAL HEAT, O LET THY GREATER FLAME
ATTRACT THE LESSER TO IT; LET THOSE FIRES
WHICH SHALL CONSUME THE WORLD,
FIRST MAKE IT TAME;
AND KINDLE IN OUR HEARTS SUCH TRUE DESIRES,
AS MAY CONSUME OUR LUSTS, AND MAKE THEE WAY.

I don't always know what I'm saying at these weddings, but I keep trying to stumble in the right direction.

A friend of mine who was at Hope for two years, studying art at UT, just told me this week that she'd gotten a divorce recently. It broke my heart. I was angry at myself. "How could she have been at Hope for two years and I didn't know that her marriage was slowly crumbling? I never asked. I never dove in. I never bothered, and a bother it would have been had I looked hard and long enough. I should have bothered with it for crying out loud!"

I guess I've been a pastor long enough now to see quite a number of people's lives collapse, disintegrate. It's sad and heavy. It makes me very melancholy.

I preached on community this past Sunday. It was part three of a mini-series.

Christian community is the most satisfying as well as the most difficult thing any of us will ever attempt. But it is also the primary place where our transformation into the beautiful image of Christ will work itself out. It is what God is calling each of us to build.

Jesus makes time for the things that are important, but he does not fill up his time with everything that could be done.

Jesus does less than what we might want him to do but he accomplishes more because he does what he has been called to do, because he knows from the Father what he needs to do and what he does not need to do.

We are not called to be Jesus, but we are called to be like him. We are called to observe his patterns of thought and behavior, to emulate the simplicity of his life—in the face of great complexity—and the value he places upon cultivating deep, rich relationships. We are called to make time for our friends and neighbors . . . relative to our calling, to our station of life, and to the particular season in which we find ourselves.

Conflict can become a God-given means of growing in love for one another.

Healthy conflict forges deep, strong relationships that are marked by freedom, not fear, by a fruitfulness that changes us into something better and more richly radiant and resilient, not a plastic fruit, a pretend Christian life, that keeps us shallow, disconnected, self-protected and in a constant state of defensiveness.

Doing fun things together cleanses our bottled-up hearts with joy, rejuvenates our tired bodies, binds us together with happy memories that we savor by telling and retelling each other, and keeps us hungry for the Day in which our laughter will be unmitigated and the liberation of the children of God from sin and death finally fulfilled and the occasion for magnificent feasting.

It's all easier said than done. I know. But I'm still going to keep heading in that direction. I can't give up. It's not worth it.

ceciliabrie said…
i saw the trailer for BABEL tonight on 42nd street. woah intense. it was on before THE LAST KISS, which i thought was a refreshingly honest, if necessarily Sad, and Beautiful story about marriage in 2006. But what's going on with the sex? someone help me here!
9:48 PM