A Philosophical Basis for the Arts 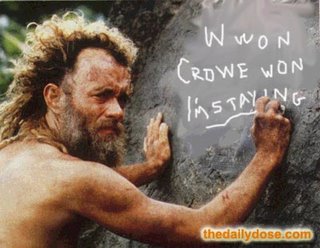 I'm on page 239 of DaVinci. I remain firmly impressed. The literary prowess is kickin' awesome. At one point in the story with a veritable storm of suspense and danger swirling around them (just like that: a veritable storm), people dying, people fleeing, Langdon (Tom Hanks) attempts to explain to Sophie (Audrey Tautou) the complicated web of malevolent deeds of the early church. Malevolent like this:

"Sophie . . . the Priory's tradition of perpetuating goddess worship is based on a belief that powerful men in the early Christian church 'conned' the world by propagating lies that devalued the female and tipped the scales in favor of the masculine."

Many dastardly deeds and rotten revelations later, we find the following sentence:

"Sophie nodded, her eyes riveted on him."

Well of course her eyes are riveted! Dan Brown, what else would her eyes be doing with all hell breaking loose and the greatest conspiracy in the world--that "COULD SHATTER THE VERY FOUNDATIONS OF MANKIND!"--unfolding before her very riveted eyes? Tell me something else about her eyes. Tell me they're wet with tears. Tell me they're flickering nervously. Tell me they're white and shell-shocked and staring in disbelief. But don't tell me they're riveted because you're telling me she has two pupils, two eyelashes and two irises, things I already know.

Oh well. The abominable schlockman. And the show must go on.

Brian McLaren throws out some interesting thoughts in a recent Sojourner's interview. On the one hand, I like that he's wanting to push us to ask why so many people are drawn to the story. They're not drawn for no reason, he says. Perhaps people are upset with "status quote, male-dominated, power-oriented, cover-up-prone" established Christianity. And that's probably true in many places. So it's good to be forced to see the issues from other people's perspectives, to be pushed to ask questions that might not immediately come to mind.

On the other hand, I find McLaren wearying in his predictable tendency to bend over backward to rebuke his version of "established Christianity." He's too quick to fire rounds at his "own" people, a people which strike me, honestly, as no longer his own but the brethren across the street, those "other" conservative, culturally retrograde Christians. Personally, I think McLaren could be far more effective if he adopted a more irenic posture, less pugnacious. Folks like N.T. Wright (presently) and Henri Nouwen (formerly) have found themselves in similarly public settings, their opinions solicited as representative of Christianity at large. But they seem to have acquired the ability to be more charming and diplomatic about it than McLaren. They strike me as less desperate. McLaren comes across more desperate to prove his point, that we should become a new kind of Christian, and so, to my mind, becomes less convincing, except to the choir.

I imagine our paths will cross eventually and my feelings rearranged, and much for the better. In the meantime I remain a stranger to his itinerant ways and so concede that I may be misperceiving him and confusing apples for bananas. I do know this, though: I don't feel the tensions he feels, or perhaps, I don't feel them as strongly. C'est la vie.

Here is the outline for chapter 3.

A Philosophy of Art: What is art, anyway?

Question: What do we do when the Bible is silent about questions we have that are neither explicitly biblical nor theological but are necessary to a clear and reasonable understanding of art and its implications for the way we live?

A. Introduction and Assumptions

a. God has made all, therefore he seeks to redeem all.
b. A total experience of God requires the participation of the total human person.
c. Certain things cannot be known apart from an experience of them.
d. Art is as much an expression of human experience as it is an interpretation of it; it is as much illuminative as it is formative.
e. Our most difficult dialogue partners are the Reformation and the Enlightenment.


Question: What is art?

C. The nature of art

1. The problematic but not impossible task before us

2. The difficulties with the term

3. A series of definitions

4. The nature of art vs. the intent or purposes of art


Question: What does art deal with?

a. The imagination
b. Sense and feeling
c. Beauty
d. The arts

a. Bad art: kitsch, cliché, melodrama
b. Allusivity: less is truly more
c. Open spaces: the gift of silence
d. What is artistic excellence?
e. What is aesthetic excellence?


Question: In what manner is art a way of knowing the world?

The thesis: Art is a mode of apprehending reality as well as a way of articulating or constituting the real.


Question: What kinds of art are out there?


Question: Is there such a thing as a distinct Christian imagination?

1. The source material: Of what ought it to be constructed?

a. The words and actions of God in Scripture
b. The life and teachings of Jesus
c. The tradition of the Church as the receptacle of the Church’s experience, corporate and individual, of the good, the true and the beautiful
d. The “classics” in all of the arts as participants in the common grace of God and containers of distilled aesthetic excellence
e. All the material of your life as locus of divine encounter

Question: What then can we conclude about art?

H. In summary: 10 Statements about Art

Adam said…
DVC -- Yeah, the writing is atrocious. It's obviously the plot, mystery, and ideas that drives the piece. It is like reading LaHaye as a feminine goddess worshipper.

What is so captivating to people, I think, is that we get a sort of "fantasy" of "news". We love to fantasize, and the strongest, most compelling fantasies are those that are the most strongly connected to reality. They whisper "It could happen...It could happen..." We get lost in fantasies like this.

Secondly, we are a people that is addicted to "the new." Greg Boyd once spoke about a conference about Jesus, and all these news reporters were there interveiwing all these Gnostic theologians, and nobody came up to him. Finally a reporter approached Boyd and he said, "Finally! Why is nobody paying me any attention?" "Because," the reporter said, "What you have to say is not 'news,' it's old hat, everyone has heard it before."

We are captivated by "the new" and we are stirred by "fantasy." DVC has both, though Brown claims his "fantasy" is truth.
9:28 AM