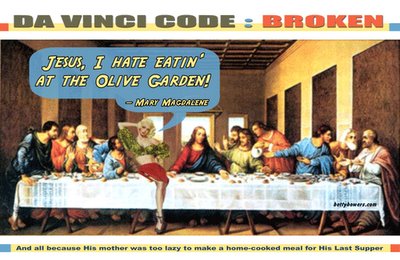 That Dan Brown is Smart!
I'm on page 71 of The DaVinci Code. I have only one question thus far: How? How did this novel become the #1 Bestseller worldwide? Seriously. How? It's so wonderfully awful; not the content (which goes without saying) but the writing. I can't imagine a bright, young high school student writing a worse yarn of nonsense. Let me tell you all the ways. No, let's not. Let me just quote one line from page 65.

"He felt a renewed confidenc that the Teacher and Silas would not fail. Money and faith were powerful motivators."

Ba-boom. There you go. Money and faith were powerful motivators. That's a sentence. You are lying! It cannot be! If I die, the truth will be lost forever! The truth! Oy vey. These, all phrases original to Dan Brown, exclamation marks included. It's like, I need to buy tomatoes! Why! To make a salad! Really! Yes! Green tomatoes! No! Roma! Really! Yes! Roma red! Argh!

It's so bad it's so good. And yet I'm forcing myself to read it to the end. It's not even a fifth entertaining as John Grisham. At least Grisham knows what captivating, thriller language looks like.

See this for interesting commentary. See this also this from beliefnet.

Speaking of which: Barbara Nicolosi the Evangelical Hothead
Barbara has a nice op-ed on Christianity Today Movies' site; nice in a barbed (ooh, no pun intended), saucy, strident way. I'm inclined to agree with her suggestion: Othercott the movie. Watch something else this weekend at the movieplex. Vote with your wallet. But like I told my young friend Adam Langley earlier today, she really does come across more like an evangelical hothead (James Dobson) than an irenic, cool-headed Catholic (Richard John Neuhaus). She has this impressive ability to be clever and ironfisted at the same time. Her sometimes hystrionic tone, I find, undermines her eminently admirable razor-sharp mind and quick-witted tongue.

For the record: she hated the entire Lord of the Rings movie trilogy.

For the record Take 2: she's never read Tolkien's books, which strikes me as a stupendous achievement.

But for this I can never fault her. As my newly converted Catholic friend Michele would put it, Barbara Nicolosi is an awesome Jesusy Catholic. She loves Jesus and fights for him like a good lover would. I'm grateful she's out there, fearlessly fighting the minotaurs and harpies of Hollywood, and perhaps a few quacked-out, tertullianite Christians too.

No Statements of Faith for Me, Thank You Very Much
LeRon Shults, a friend of Emergent Village and lately departed theology lecturer from Bethel Seminary, has just written an anti-statement of faith "on behalf" of emergent people. I say it in quotes because it's impossible, by definition I guess, for anyone to speak on behalf of the emergent movement. It's a river, they say, a confluence of dynamic conversations and relationships. None can speak definitively--which strikes me as vaguely Orthodox in manner, less definitially, more self-evidentially true.

I wouldn't even know where to begin in my response to his diatribe ("archaic : a prolonged discourse"). He says for the Emergent movement to create a statement of faith would be "unnecessary, inappropriate and disastrous." I'll comment only by saying that his tendency to overstatement surprises me. For a trained theologian he uses words like a rave dancer, capering ecstatically every which way.

"The very idea of a "statement of faith" is mired in modernist assumptions and driven by modernist anxieties . . . ."

Goodness gracious, the language here, and all that follows, is so wild as to be embarrassing. I don't mean to be snarky, it's simply incredible that he's written this essay. He's deduced and assumed and concluded in the most bizarre ways: "Paul, Luke and John all talked much more about the mission to which we should commit ourselves than they did about the propositions to which we should assent . . . the struggle to capture God in our finite propositional structures is nothing short of linguistic idolatry . . . a 'statement of faith' tends to stop conversation . . . ." Plenty, and I mean plen-ty, of Christendom begs to differ and does so in ways that express a winsome and vigorous faith--not static, not stultifying.

I've no time to offer a real critique, and I really would love to sit down and ask him questions, but I can't help thinking that Deuteronomy 5 and 6:4 and Acts 8:37 and 1 Cor 8:6 and Phil 2:6-11, plus a plethora of biblical propositions, all provide sufficient grounds, and therefore precedent, for the construction of statements of faith.

And then there's the rather pre-modern Nicene Creed et al.

I don't know. My concern is that this kind of stuff gives the Emergents a bad name, bad meaning wispy, quixotic, reactionary. I wonder what Brian McClaren thinks of this. Or my old prof Stan Grenz from beyond the veil.

[NOTE: while the printed date of this entry states May 4, I am writing now on Saturday morning. A wicked thunderstorm late Thursday night knocked out the power in my neighborhood. Thank God for back-up batteries.]

"Follow those who seek God, Run from those who find him."
That's a bumper sticker. Listening to KUT 90.5 on my way downtown I heard John Aielli mention that today (that is, "today Thursday," when I wrote this sentence) was the National Day of Prayer. I thought, Wow, I can't believe he's saying that. Then he said, It's also the National Day of Reason. Oh. The two together made him think of one of his favorite bumper stickers, the above quoted. It's such a lame sentiment, though. It's a shame it's so popular. Why would you not want to find the Source of all Beauty, Peace, Goodness, Power, Happiness, Etc?

The aphorism expresses a reaction against perceived arrogance. But still, it's lame. It's lame because it purports to be wise and humble, when in fact it's just another easy-minded, fuzzy-headed philosophical end-run around costly discipleship.

Hoodwinked: the future of Christian film
Christianity Today Movies recently interviewed Cory Edwards, the writer-director of the animated feature Hoodwinked. Edwards' thoughts on being a Christian in the film world bear witness to an encouraging trend in the church: believer artists are maturing.

We're growing up and thank God for that. We have much to be hopeful over.

Speaking of film: Laura Dunn and Robert Redford
I shared a hot chocolate Wednesday with local documentary filmmaker, Laura Dunn. We sat at a small table at JP Java's near campus. There, with her one-year old Jasper keeping our conversation fun and multitasked, we talked life, church, family, movies and the peculiar aspects of Austin's art scene. Her latest project explores the complicated and often acrimonious, even violent, debates surrounding Austin's natural springs (aka Barton Springs). Terrence Malick (Badlands, Thin Red Line, The New World) commissioned Laura to create a documentary that would allow the particular, Barton Springs, to become a microcosm for the larger, more general human struggle between business and the environment, job-provision and nature-preservation, progress and community, commerce and art, the spiritual and the physical.

Laura's hope is to infuse the film, at least the last third of it, with a genuine spirituality; not froofy spiritual eco-touchy-feeliness, but a sense, or suggestion, that there is a Creator who cares deeply about all the parts of this debate.

Her sadness is that she's met so few, so terribly few, evangelicals who care as seriously about God's creation as they do about his word. I mentioned to her the Evangelical Declaration on the Care of Creation, which she'd not heard of. I told her that they were out there, and perhaps even amongst our generation, growing and active. I told her I'd be praying for her.

About Robert Redford, she'd just interviewed him for the project, and I think some of the money came from the Sundance Institute.

Again the good news: God is raising up a generation of believer artists who are committing themselves to love Jesus and their craft with equal fervor; ordinately of course, but viewing the task of artistic formation as no less important than that of spiritual formation.

To that End: the Death Penalty
Our good man Andy Davis will be participating in the internationally juried exhibit at Gallery Lombardi, which opens tonight, "Justice For All? Artists Reflect on the Death Penalty." Out of hundreds of artists, submitting over 700 pieces, from everywhere on the planet, Andy was chosen as one of the few artists from Austin to have their work exhibited. He might also be the only Christian.

And so it becomes more encouraging news for the believer artists in Austin. Slowly but surely, the salt of heaven makes its way into the most unlikely places, secretly, subversively, and, in the spirit of Tom Bombadil, joyfully.

A good quote
"Man today is in revolt against the world in which he lives, against its dehumanizing tendencies, against slavery under the bosses of the new Galbraith elite, under a computerized bureaucracy, against alienation and the loneliness of the mass man."

Another good quote
"Indeed, it is not the preacher or the sociologist who speak to us most clearly of the 'crisis in civilization' in which we are involved, but the artist."

"As something that can engage us wholly, [art] can also enact faith and love, vivifying and in a real sense 'converting' religious concerns sensually and imaginatively, letting one taste and savor sacred delight."

kelly said…
I read the anti-statement of faith for emergent churches and it gave me flashbacks to architecture school in the early 90s. Back then, anyone that wanted to seem hip and smart talked about everything in terms of language and its limits. No one seemed to notice that architecture is not language, however much it may have some elements that are loosely analogous to language.

Part of the problem, then, is that any written (or spoken) denial of language trips over its own feet. It is by now a truism that language is limited and flawed, but it's all we got. The main problem with the writer's argument, though, is that language is used by people as moral agents in various contexts for various purposes - so if you just talk about language as such you don't have to deal with all that other messy stuff.

I don't know much about the emergent church movement, and there may be some legitimate argument for avoiding a statement of faith separate from the creeds, but it seems like this is not the argument. If I were to judge the movement based on this article alone, I would label it 'fad'.
7:57 PM

Adam said…
I found this blog by Barbara's friend much, much more informative and winsome in regards to "Do we see DVC or not?"

Barbara's language evokes strong emotional reaction and reminds me very much of a "mob mentality," whereas Jan's language is cool, helpful, and reasonable.

Tk said…
fr. larry at st. louis catholic church shared that he says mass stays at the rectory at the parisian cathedral mentioned in the da vinci code once a year. his fascination with architecture drew him to study every nook and cranny of the structure all the times he's been there. and he laughed that NONE of the description of that cathedral in the book is true.

...haha. so much "archeological and historical accuracy."
1:11 PM