The Only Way Forward is Backward 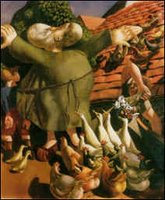 Yesterday was my friend Toddy Burton's birthday. Her real name is Virginia Todd Burton. Todd is a dad's name. We only know her though as Toddy. She turned 30. She grew up in Nevada and went to school at Brown, where she studied film with a bunch of really fun feminist friends. Her films are mostly weird. They're either about cross-dressing or wildly dressed singers or about super heroes. Her latest project is called The Aviatrix. It's about a girl in her twenties who contracts cancer and the only way to claw her way out of the insanity of a degenerating body and a mind that can barely withstand the fire drugs is to escape into her alter ego, the super-powered, super sexy woman The Aviatrix.

Toddy had cancer two years ago. I visited her once, in a kind of old fashiony pastoral visit. I felt very old fashioned, like a country Presbyterian minister from the late 19th century, or maybe like John Ames in Marilynne Robison's latest novel, Gilead. I sat with her at the rickety metal dining table and we ate our split-two-ways macrobiotic to-go dinner. The first thing she told me was a list of instructions I needed to half memorize in case she fell into an epileptic seizure. I blinked, and nervously scribbled the instructions in my head.

She wasn't hungry. So she left most of her meal on the table and lay down on the couch. She said she wanted to show me some music videos. I joined her on the springy, college studentish couch and together we watched Michel Gondry video magic unfold: Björk, The White Stripes, The Chemical Brothers. She even let me relive Michael Jackson's 1983 video sensation, Thriller. But she quickly bored of this too.

She said she was ready for bed. I looked at my watch. It was around 8:20 pm. So I walked her to her bed, where she crawled in, and once under the covers asked me to read from the Bible. I read to her from Romans.

Toddy was the kind of person who walked herself into the kingdom one step in front of another. No leaping. No altar call jotted down in the margins of her Bible. No blinding light. Just a gradual movement from there to here and one day she knew that she wanted Jesus more than she wanted other stuff. Her way wasn't very Evangelical, and it was hard for an Evangelical like myself to know what to do with it. It wasn't until she dove under and thrashed around in the waters of baptism last September that she and all of us knew that Jesus was her man, no questions asked.

She'd asked me to baptize her, but I told her that I thought my father would be a better choice. So he and seven or eight or who knows how many of her best girlfriends joined her in the font at the back of the sanctuary and performed the rite. My role ended up being that of a Catechist. I catechized her in the ways of baptism, biblically, theologically, spiritually. The one thing she really liked, and for all I know solely remembered, was my suggestion to stay down under the water like a towel in the washing machine, to make sure she really got clean. It was a metaphor, to my mind, but she liked it so much she took it literally.

She instructed my father to keep her under for a good ten seconds--nothing less she said--just so she could feel all that old man dying a good soaking, rinsy death. The only way up, I'd preached the previous Sunday, was down. This was Jesus giving directions, so that we would know how to follow him.

Yesterday as I was praying for Toddy and asking God for a special word of encouragement, the phrase "The only way forward is backward" came vaguely to mind. As we sat around a chiminea in her backyard around 10:30 pm last night, I felt inside me a stirring of compassion for my artist friends. Many of them have a hard road to walk. There were six of us there besides Toddy: two filmmakers, an actor, a sculptor, a supporter of the arts, and myself.

"Toddy," I told her, "it's a lonely thing sometimes to be an artist. We don't have really many role models. There aren't many older artists out there who love Jesus with a mature faith and who also evince a mature artistry." I thought to myself that the main exception to this is possibly the visual art world. We have a lot of good elder moms and dads in CIVA; and by elder I mean 50 and 60 years old. Maybe some of the guys out of Cornerstone come close.

"But there are not many older artists who are making unconvential, difficult art. Not many mature believer artists, that is, relatively speaking, creating art that unsettles and provokes, art that forces us to look at the darker or absurd aspects of life. That's the kind of art you make, Toddy. It's not the only kind, of course, but that's where God has you for the moment."

So what do we do, I asked myself earlier in the day? Where do we go for wisdom? Where do we find artists who love God with all their heart, mind, soul and strength, who are humble, who are generous, and yet who live at the margins of the proverbial social status quo? Thankfully we have a decent number of older mother and father types at Hope who sympathize with this younger generation. But how do I counself my friends?

His named popped first in my mind. Then St. Benedict, then St. Augustine and St. Theresa of Avila and all the rest. The saints. That was it. That's where we needed to go to find our mentoring: to the past. The Cistercians and the Bridgettines, these could become abbots and abbesses to the artists of today. They could show us a radical way of being: radically in love with God, radically risking their reputations and all they possessed.

One of the things that's been difficult for me is to find a way to release the artists in our community who sense a calling, or if not a calling, it's just inside them, to make difficult art. I don't know how else to put it. It's not pretty or easy or standard or delightful or maybe even mature, it's just out there, gloomy and disturbing. I can't stop them, even if I tried. They're adults. If I felt it was truly immoral or self-indulgently perverse, I would say something. I would. But with most of them I trust that they're genuinely trying to find the truth about things. But be that as it may, I still want them to take the harness of Christ, to yoke themselves to Jesus in a radical obedience to his Word. In a sense, this is no different than Augustine's infamous, "Love God, then do whatever you want."

So perhaps, I told Toddy, an earnest study and submission to the saints of old will help you learn how to make your art. It won't be easy. They'll demand everything from you. And you'll still need us, your friends, and you'll need older moms and dads at Hope to help you become a mature woman, a mature Christian, a mature artist.

But those saints, they know a thing or two about difficult living. Especially the mystics, they know what it means to follow a voice into places that your fellow brethren will find simply strange and possibly dangerous. So go make crazy films, Toddy gal, but never forget your first love. Keep the saints close by, both the old and us newbies. We'll walk with you. We'll do our best. And remember, 30 is the new 20, and a wonderfully perfect age to make new beginnings.

Anonymous said…
This comment has been removed by a blog administrator.
10:17 PM

Jim Janknegt said…
I heartily agree with Mr. Taylor's recommendation of letting the saints show us the way. I would especially recommend to all you painters the blessed Fra Angelico, who was beatified in 1882 by John Paul II. He is one of the few saints who is a painter. http://en.wikipedia.org/wiki/Fra_Angelico or http://puffin.creighton.edu/jesuit/andre/angelico.html
6:11 AM

ellen said…
I like to look to Daniel and Joseph in the old testament.

I don't know if they're artists, but they were men who didn't have the comfort of a close community of like-minded folk were they lived and worked. God spoke to them in dreams. he directed their lives into strange places...
5:30 PM

Andrew Philip said…
Encouraging stuff. Good to see such clear-headed understanding of the arts and what their role in the church's mission is and, more to the point, isn't.

Pilgrim in Progress said…
I had the privilege to meet this Toddy yesterday, and look forward to sitting down with her over coffee later this week. Thanks for sharing - not just the story (with us), but your life (with her).
9:52 PM

goo gerber said…
Toddy is perhaps the most magical American I have ever met. I only wish I too could have been there to see her turn 30, or 20, or even 10. Still, I feel incredibly blessed to know her now.
9:24 AM