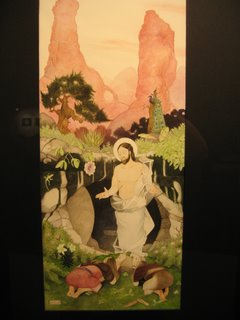 The Festival of Faith & Writing
I'm headed out today for Grand Raggidy, Michigan, home of all things VanAndel and DeVos and other Dutch memorabilia. I'll be hanging out with artist types at Calvin College's festival of Christian writerdom. I told my hopearts friends that I had two purposes for going, but it's actually three. The first is to get an insider's perspective on the culture of "Christian writers" (or as some of them might prefer, "writers of faith"). This is what I call the zoo watching part. All God's creatures great and small will be there: peacocks, beetles, lionesses, beavers, and dogs everywhere sniffing each other out.

The second reason is to meet editors, publishing houses, and literary agents that might help me officially get started on the writing of this book. As of today I have a meeting on Saturday morning with the senior acquisitions editor for Baker Publishing, a fellow whom I actually met six years ago at Regent College, where he was trolling for new writers. Back then I was definitely not one of them; I was the positively never-ending student.

But the third reason for going is to take notes on how they've organized the conference. I'm still moving forward on this idea of a conference for pastors and artists. Larry Linenschmidt, the regional coordinator for all things Lewisian, including the upcoming C. S. Lewis conference, has agreed to help me target Fall 2007 or Spring 2008. Right now I'm collecting data. I've an appointment tomorrow morning with John Witvliet, the director of Calvin's Institute of Christian Worship and a guy I respect very much and TA'd for at Regent the summer of 2000. So hopefully some good stuff will come out of that.

About Salman Rushdie, no, I've not read the Satanic Verses, I just like saying his name. It's very Ludlumish. I'm looking forward to hearing Walter Wangerin (The Book of the Dun Cow and The Book of God), Luci Shaw, Marilynne Robinson (author of the recent Pulitzer Prize, Gilead), Michael Card (my late '80s hero), Don Miller, Mister Blue Like Jazz, and our very own Susanna Childress. I emailed Lauren Winner yesterday to tell her I'd be at the festival. We met on the back row of a room full of Vine attenders in Lake Geneva, WI, in the Fall of 2000. Many years later I've got a wild idea I want to throw out in her general direction. We'll see.

In any case, I consider it a great opportunity to be going and see it as part of my continuing research of the whole Christian/art world. I'm praying for divine appointments, for grace and favor with editors, that God would show me how best to use my time, and that I could be an encouragement to others who may not be a part of any kind of community of believer artists.

Holy Week Rocks
I do love Holy Week. It's surely my favorite time of the year, ten to the ten times more than the over-commercialized Christmas season. I'm 100% in favor of the Incarnation, but I seem to have lost my appetite for gift-getting and carol-singalongathons. Holy Week is the culmination of a long pilgrimage of mortification. By the time Easter Sunday has come, if you've done your penance and your death-to-the-flesh and Maundy Thursday, Good Friday, and Easter Vigil right, you're about crazy with anticipation. It's like, Rise up already!

It would be difficult to convey the richness of our various services; or it'd just take too much time. One highlight for Maundy was the reading of the Gospel of Mark in one sitting. 35 readers shared the duty and I tell you what: that story of Jesus is rivetting, what with all the Immediatelys here and Immediatelys there and Immediatelys it's over and he's up up and away before you can say I surrender all. Good Friday I invited seven members of our congregation to reflect on the seven last words of Jesus (words spoken on the cross). They ranged this year from a college gal to a seventy year-old fellow named Cotton Hance. (How's that for a literary name.) The service is a series of seven triads. We sing a hymn, we listen to a 5-7 minute reflection, and then we take a moment of silence to ponder. I regret I don't have time to give details, but it's hands down my favorite service of the entire year: so rich, so poignant, so perfectly the body of Christ in word and image.

Easter Sunday we sang with gusto, we watched/participated in a beautiful liturgical dance, and we enjoyed Day 1 of the Easter exhibit. I also preached. My sermon was on the idea of resurrection as the announcement of our homecoming. At some point I'll copy here portions of the sermon. But what a resonant day. After all that long, tedious walking with Christ through his Lenten march, we were hop-scotching ready for endless celebration. And celebrate I did: all day long, wine-bibbing, meat-eating, dark chocolate-devouring.

I've Officially Entered the "Resurrection Years"
It was my birthday this past Monday, and with it I left the "Jesus Years" and, as my friend the filmmaker Mike Akel puts it, I entered the "Resurrection Years." I made it out of 33 without a single miracle. But neither did I die, so it's not all bad. Now I have a high-flying ascension and a tongue-rattling pentecost to look forward to.

Powerful Ghosts Aboard United 93
A nice piece by Terry Mattingly on the forthcoming 9-11 movie.

Austin's Cultural Sector Draws $2.2 Billion for Austin economy
According to recent studies the artists and other non-NYSE viable industries of Austin are helpin' us out. The city's cultural sector provides $48 million in tax revenue for the city each year and represents about 44,000 jobs. Not bad.

L'Enfant (The Child): The Jesusy Movie
Jeffrey Overstreet has a nice review of the European film by brothers Luc and Jean-Pierre Dardennes. Among his raves:

"It's a story about conscience, responsibility, and family. It betrays no preaching, politicizing, or prejudice, but sticks to artful observation, respecting the viewer's intelligence and ability to discern its themes. The vision of human behavior is so authentic and convincing, it often feels like a hidden-camera documentary. Nothing is heavy-handed, sentimental, or gratuitous—in each scene, everything belongs and contributes to what the film can mean. The two central characters, Bruno and Sonia, are played by supremely talented young actors—Jérémie Renier and Déborah François. But they're not recognizable celebrities for most moviegoers, which makes us concentrate on their characters without distraction. The camerawork is effortlessly agile and clever, and yet it does not draw attention to itself. It's fast-paced, intense, and wraps up with an unforgettable conclusion. Did I mention the nerve-wracking car chase?"

The trailer hadn't done anything for me, but Overstreet convinces me to go--or at least to search for the nearest, dingiest arthouse that might be showing it.

The Devil Made Him Do It
Here's another fascinating film bit. It's an interview with the director of the documentary The Devil and Daniel Johnston.

A Visit to the Austin City Council
I recently attended an Austin City Council meeting co-hosted by the Arts Alliance. It was my way of getting "involved"; citizenry in action. But boy you thought high school civics class was boring. That was "teenage boredom." This was "adult boredom," and the latter feels more painful because as a teenager you assume a third of your life must be boring. Needless to say it was not what I thought I was going to; I certainly didn't see the transvestite mayorial candidate coming. I have a write-up of my impressions which I hope to download next week. But God bless the government, because we need it.