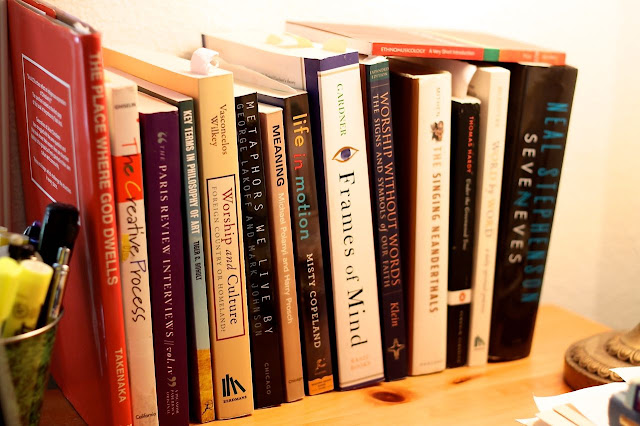 Christians are a people of the Word. We are also a people marked by words. Sometimes we are a people who fail to use words carefully enough. We beat them to death, we rob them of their mystery, we jumble them and clog our ears with them and abuse one another and rob ourselves of dignity with them. McEntyre takes fifteen words—like listen, enjoy, resist, ask, leave, welcome—and she gives each word a week, guiding readers in an examination of the word from seven different angles throughout the week. With the word “ask,” for example, she reflects on the meaning of statements like, “Ask for what you need” or “Ask for what you cannot predict” or “Ask without an agenda.” With the word “dare,” as with all other words in the book, she draws on the spiritual practices of lectio divina and centering prayer as a way to make sense of things like “Dare to admit honest failure” or “ Dare to protest abuse of power.” "I invite you to discover," says McEntyre in her introduction, "how words may become little fountains of grace. How a single word may, if you hold it for a while, become a prayer." Those are good things to discover.

What is an Advent rose? What is All Souls Day? What purpose does an amice serve? What is the symbolic meaning of a basilica or of the liturgical color blue? What’s the relationship between a cauldron of oil and St. John the Apostle? What’s the churching of women all about? How do the images of a dolphin, donkey and dove help us to perceive the gospel? What do we make of an Exaudi and an excommunication? And how do a fleur-de-lis, a Gradual, a handcuff, an incense boat, a Jesse tree, a knotted club, the lifting of hands, the mantelletta, the nimbus, the Octave of Christmas, the pelican, the Quadragesima, the rochet, the Feast of St. Michael and all Angels, the thurifer, the Venite, and wimple, the yeast and the zucchetto enable the church to worship God? If you wish to know the answer to these questions, then you’ll want to get your hands on this magnificent resource. It’s the best of its kind.

Why do human beings sing? How long have human beings been singing? What exactly is singing? What does singing “do”? To say that singing brings people together, or as Alice Parker once put it, “singing is one of the most companionable arts,” is to give a generic and unsatisfactory answer. It is to state the obvious, even if it is true. Mithen’s book answers these questions by expositions on the relationship between music and language, music and the brain, music and emotion, music and sociality, music and sex and love as well as music and parenthood. While Mithen seeks, in some measure, to explain the “mystery” of music, he does not presume to diminish the mystery that makes music so central to human life.

So much of the success or failure of a fruitful conversation in the field of faith and the arts hinges on a clear use of terms. While terms like beauty, transcendence or sacramental are quite popular in writing about art and faith, rarely are such terms carefully defined. Without any kind of definition, assumptions are made by the author/speaker of a reader/audience and the result is often cacophony. With poor communication comes unfortunately the loss of communion. It’s for that reason that little books like Roholt’s are so welcome (little in page numbers, substantial in content). He defines terms like aesthetic judgment, formalism, Marxism and Sublime. He explains who Adorno and Danto are and why they matter to the discipline of philosophical aesthetics. He introduces the reader to key texts, such as Aristotle’s Poetics and John Dewey’s Art as Experience. And he offers a brief tour of art forms like dance and photography and tragedy. All I’ll add here is this: if only books like this were better known and if only more books like this were on offer.

The title alone is worth the price of admission. In this collection of essays we are reminded, yet again, that every practice of corporate worship is culturally shaped and therefore relative to that cultural context. With Tertullian’s comment in mind (“whatever belongs to those that are of us, belongs to us”), liturgical theologian Gordon Lathrop writes, “So today, in the renewed liturgy, we keep a revised version of the ancient Asian Christian reworking of the Jewish Passover to become our Pascha, or Easter, the ancient Roman (and then northern European) Christian reworking of the pagan winter solstice has now become our Christmas, as well as the eastern Mediterranean (and perhaps ancient Spanish) creation of Epiphany and the ancient Egyptian and African creation of Lent.” With plenty of insights much like this one, the book is a friendly reminder that our liturgical practices don’t come from nowhere. They come from particular times and places, and as Newbigin might remind us, we do well not to confuse the gospel with our cultural homes.

If you wish to understand how the arts involve a way of being in the world, capacities to know the world in unique and irreducible ways, intelligences of their own, without which we could not be human, and a way for humans to generate and discover meaning in the world—in God’s world no less—then you could hardly go wrong by reading these three books. They should be required reading for every student of theology and the arts in particular and for faith and the arts in general.

I’ve read bits and pieces of Copeland’s life in magazine articles and newspaper interviews over the past several years. I became curious about her life, so I decided to read her biography, which proved to be inspiring and, well, moving. She is in every way an unlikely ballerina. Life in Motion offers, as one might expect, a glimpse into the competitive world of ballet and, as one might not expect, insight into the racial tensions and class conflicts that mar a less-than delicate discipline of art.

De todo hay en la viña del Señor. There’s a little bit of everything in the vineyard of the Lord, as my dad would often say to me when we lived in Guatemala. This is just as true of Christian practices as of musical practices. In this “short introduction,” Rice explores the discipline of ethnomusicology, as the study of music in all its biological, social, historical, cultural and artistic diversity. It’s an excellent introduction and a salutary reminder that westerners do not have the market on “good” or “useful” music.

Originally published in 1872 and often regarded by critics as the least interesting of Hardy’s novels, Under the Greenwood Tree revolves around an amusing conflict between a group of rough-hewn church musicians, the Mellstock parish choir, and a vicar who wishes to replace the choir with an organ, to be played by the comely new mistress, Fancy Day. It’s a perfect reminder that, as far as art in worship goes, there is nothing new under the sun. It’s also a perfectly delightful “pastoral” novel.

One of the things that the church has wrestled with historically is the question of contextualization. What does it mean to contextualize the gospel in a different time and place? Takenaka’s book includes a helpful introductory chapter, identifying the lines of thought that give birth to a distinctively Asian architectural sensibility, followed by a magnificent collection of examples of church architecture across the Asian continent. It’s a refreshing reminder that all church architecture, whether Western or Eastern, whether urban or rural, is an instance of non-neutral contextualization.

11.  Brewster Ghiselin, editor, The Creative Process: Reflections on Invention in the Arts and Sciences (University of California Press: 1952).

What is creativity? And how is creativity at work in the life of writers, artists and scientists? This wonderful selection of entries includes letters by Einstein and Mozart, reflections on the process of inspiration by Jean Cocteau, Stephen Spender’s thoughts on the making of a poem, and the origins of a work of art by Rudyard Kipling, Dorothy Canfield, Friedrich Nietzsche and Katherine Anne Porter. It’s a miscellany of material but insightful all the way through.

If there is one thing I love more than most, it is reading about how artists think about their life and work. This book, which constitutes the fourth volume of collected interviews published by The Paris Review, includes conversations with, among others, Maya Angelou, Stephen Sondheim, Marilynne Robinson and, one of my favorites, Haruki Murakami. With an introduction by Salman Rushdie, the book is a perfect companion to a rainy day along with a nice cup of tea.

What if the moon blew up and the debris that resulted from this catastrophe rained down through the atmosphere in a way that guaranteed the scorching of the entire earth? What if all living species were to be wiped out as a result? What if humans had enough time to choose a (controversially) representative group to escape earth and to live in a “Cloud Ark” until the “hard rain” subsided? What if it took 5,000 years for the lunar fire and brimstone to subside? What if the population on the Cloud Ark qua Space Station were reduced to seven females? What if these women figured out a way to reproduce themselves and, 5,000 years later, to generate seven new races and to survive in space until earth was re-habitable? And what if two groups of human beings had in fact been able to survive on planet earth, by digging deep into the earth and by submersing deep into the ocean, and each group had experience a minor form of biological evolution? It’s these questions that make Stephenson’s book riveting stuff, thick with hard science, light and dismissive of religion, but with characters and dialogue that make the novel philosophically compelling business. It’s one of the many sci-fi books I read this year and certainly one of my favorites.

If Andy Crouch is right in saying that the best way to change a culture is by making new culture, and if the best cultural changes come about by way of relationship, then Fujimura’s book, as a cultural artifact, is a model of “culture care” (as he has termed his present mission). Fujimura, in conversation with Shusaku Endo’s novel Silence, touches on a perennial religious question: pain and suffering and the deafening, sometimes oppressive silence of God. Whether the experience of God’s silence turns into something beautiful is always a possibility for the pilgrim. But the possibility of beauty is never a demand that we can make of God, it is only a gift that we can receive, often on the inscrutable timetable of God’s mysterious purposes—which of course sounds great on paper but in actual fact, as I know firsthand, is profoundly wounding and, as witnessed in Endo’s protagonists, soul-crushing. Thank God for literary companions along the way, like Endo and Fujimura. 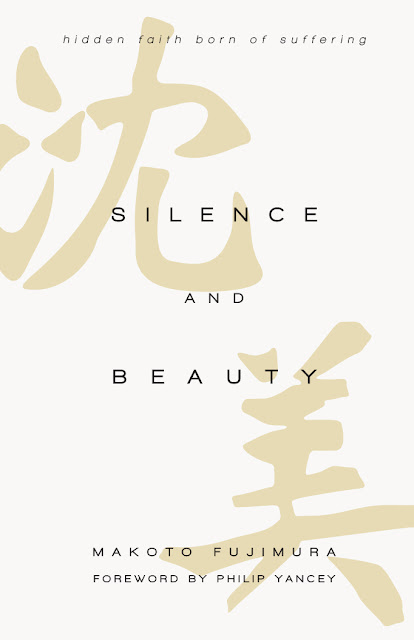