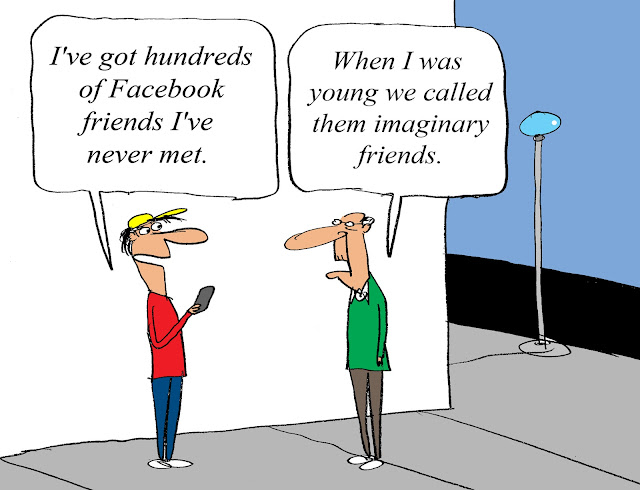 As I anticipate being off of social media during the final stages of the presidential campaign, as a way to resist distractions during my academic sabbatical, I am reminded of Andy Crouch's recent comment on Twitter, that there are three things that require embodied presence, rather than media/telecom/virtual reality, to do well:

I say, yes, yes and yes to each of these from first-hand experience that has, at times, included an utter failure of my part to honor that fact.

I am also reminded of a few other things.

1. Facebook isn't real life, it's edited life, and it should always be treated accordingly, even if it's tempting to think that other folks live ridiculously interesting or enviously awesome lives.

2. The majority of my friends on Facebook are, strictly speaking, acquaintances, as my German colleagues might remind me, even if Facebook collapses any meaningful difference between the two and implicitly encourages acquaintances and strangers, on certain days, to speak to each other in ways that only a true friend could dare to do and survive to the other side of "hard" words, lovingly given.

3. Drive-by "shooting" of articles or polemical broadsides at one another IN ALL CAPS is rarely an effective way to change minds, let alone hearts, but it'll happen anyway the entire month of November and it will involve plenty of immediate rather than pre-meditated commentary, because, quite frankly, we'll all be desperate for empathetic care in the middle of what will feel like The Thirty Years War all over again.

4. Emoji emotions lack the nuance of non-verbal communication that can only be rightly experienced in person, however tempting it will be to attack all those "evil" people voting for the wrong candidate with angry and weeping emoji's on November 9, 2016. I will have to content myself with emoji stickers that I can plaster on my t-shirt, as I walk down the aisle of my HEB grocery store in search of heaps of Cookies 'n Cream ice cream.

5. I rarely pray as often as I worry about things in our country, but I fantasize that Mark Zuckerberg will one day institute a one-hour moratorium on all Facebook activity, right around noonday. He'll do so in order to make time for quiet contemplation, a shared moment with a friend in person, and an invitation to pray about the crazy, broken parts of our world as a way, in part, to decrease both the stress levels that provokes diseases in the physical body and the psychic toxicity that so easily leads usually reasonable human beings, including myself, to turn into werewolves and cuckoo heads.

6. It goes without saying that I am grateful for many of the goods that Facebook provides us--the Memes (the Star Wars and Hogwarts-related, especially), the Maps ("Texas is as big as France and London combined!"), the family pics, the wiki-fication of swappable knowledge, the Wowzer feats of athleticism and artistry and human kindness--but I am equally nervous about the world that it so easily lures us to inhabit, which may have nothing to do whatsoever with the flesh-and-blood neighbors whom I may find less than conveniently engaged than my virtual neighbors.

7. In the end, I am convinced that the Benedictine monks have it right: ora et labora. Pray and work. Both are needed. And I'm sorely in need of getting my prayer life in better shape, which hopefully will happen during my sabbatical. But work, too, is needed, and my sincere prayer is that God will bless your work, whatever it may be, with the grace of Jesus and the power of the Spirit, in whom the peace of God is made tangible.

I also pray that for me and for Phaedra and for Blythe and for whatever child God has for us to adopt, God-willing in the near future.

Lastly, I'm grateful for the voices of sanity in a sometimes insane world (insane outside my head and sometimes inside my head), for people who remind me that humility, however unwelcome it may be on particular days, does in fact lead to the life that is truly life.