The flourishing of the liturgical arts on Calvinian terms 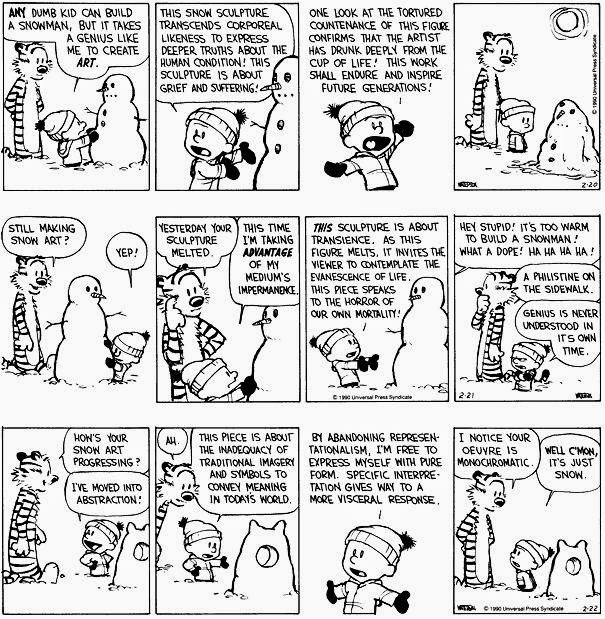 The barista at Starbucks just asked me what my dissertation is about. She's seen me sitting at the same little table for the past month, in my office away from my official office, and she was curious what kept me returning. I gave her my generic answer: "It's about theology and the arts." She smiled and said, in typical Starbuckian friendliness, "That sounds so interesting!" I figure if somebody really wants to know, they'll keep asking until I give them the real answer. It's a question my mother has asked me repeatedly, along with friends, colleagues, church people, and strangers. It's the right question to ask, though I still seem to stumble over the ten-second answer. What's your dissertation about, again?

As I prepare to defend my thesis next Wednesday, I thought I'd drop here a small portion of my conclusion. It is the beginning of an answer to my project's original question: "Is it possible to argue for the flourishing of the liturgical arts on Calvinian terms?" My answer is yes. But, of course, that answer appears 390 pages after building and defending an argument in sympathy to, but also often against, Calvin's theology of worship.

God-willing, I'll defend my project successfully and eventually publish a book version of the dissertation. Until then, it's hip hip hooray for getting this far and for getting an opportunity to do it. (And, yes, the project works with John Calvin, not the other Calvin.)

The flourishing of the liturgical arts on Calvinian terms
The question that our project has left outstanding is this: How may the liturgical arts be said to flourish on Calvinian terms? For some, of course, it may be presumed that there is nothing interesting to discover in Calvin’s liturgical theology, so the answer to this question is moot. Others may feel that nothing more should be said. Calvin has already said everything that could be said about the liturgical arts in light of his biblical arguments or that his social location pre-determines the sorts of things that might have been said.  Still others may dismiss his views as theologically problematic (dualistic, pessimistic, platonic) and therefore inimical to a fruitful investigation of the arts in worship.

The wager of this dissertation is that there is in fact something interesting to discover in Calvin’s theology. Yet before we can discover what that is, we need to define what is meant by “flourishing.” Two senses can be suggested. The first sense of flourishing envisions an increase in the number, kind and uses of the arts in public worship. The second sense of flourishing points to the right conditions in which any kind of liturgical art, whether few or many, whether “high” or “low,” will effectively serve the purposes of public worship. In this conclusion, I focus on the second sense.

Hewing closely to Calvin’s explicit theological and exegetical concerns, the flourishing of the liturgical arts might look something like this: As products of human making, arising out of the stuff of creation, the arts flourish in a liturgical context if they are inextricably linked to Word and Spirit, promote order, exhibit beauty, render pious joy, and prompt the faithful to “lift their hearts” to God together, rather than remain entrapped in self-absorbed concerns, and “return” with God to earth, rather than remain unmoved by the ethical and missional realities which awaited them in the world at large.

While this represents one way to render Calvin’s liturgical vision, I wish to propose a more synthetic view that extends beyond what Calvin himself imagined but which remains faithful to his trinitiarian theology and to his fundamental vision for ecclesial life. I propose the following: that the liturgical arts flourish on Calvinian terms 1) when they are regarded as creaturely media that 2) participate in the work of the triune God to establish right worship for the church, and that 3) fittingly serve the activities and purposes of public worship.

The liturgical arts as creaturely media
While there is no such thing as a theologically neutral understanding of creation, I place this criterion first in order to follow the basic movement of the dissertation: from a consideration of the material creation in general to a consideration of materiality in the specific context of public worship. I argue that the liturgical arts should be seen chiefly as creaturely media, which possess a God-given integrity to be particularly “themselves,” through which the glory of the triune God is disclosed and expressed.

From Calvin’s perspective, creation represents the “hands and feet” of Christ and the abundant provision of God, which the human creature is invited to enjoy for both “useful” (practical and biological) and “non-useful” (aesthetic) reasons. In this view, creation is a place for something: for goodness, for discovery, for beauty, for vitality and fruitfulness, for action, for the worship of God, and for the mediation of God’s presence to humanity. Though sin vitiates humanity’s capacity to enjoy God in and through creation, sin does not rob creation of its capacity to stage a spectacle of God’s powers. And while it is only with the help of the Law, faith in Christ, and the internal witness of the Holy Spirit that the faithful are able to enjoy creation fully, for Calvin the faithful are in fact capable of discerning, and indeed of becoming ravished by, the glory of God through creation.

If the church’s praise, then, can be said to be ontologically inseparable from creation’s own praise, then I suggest that the purpose of the liturgical arts will not be to “get out of the way” but rather to serve the purposes of the liturgy on behalf of creation. The purpose of liturgical artists will be to offer “articulate” voice to creation’s praise, while never seeking to replace creation’s own praise. Their work will be to welcome the familiar and strange voice of creation into the liturgical sphere in response to the familiar and strange voice of God.

Calvin rightly stresses that the triune God has distinguished an innumerable variety of things in creation and has “endowed each kind with its own nature, assigned functions, appointed places and stations.” This is another way of saying that God has endowed the things of creation with their own integrity that demands careful, respectful and loving attention. One task for liturgical artists, on this view, would be to understand the logics and powers of the material stuff of creation. This would involve asking how color, stone, wood, metal, fabric, glass, wind “work.”

If a combination of empirical and sanctified sight afford the faithful right understanding of creation, as Calvin believes, what then might we observe about the dynamics of creation: its patterns and spontaneity, its simplicity and extravagance, its order and non-order, its spare and ornate quality? Liturgical artists would also want to pay close attention to how human bodies work—how they relate to both material and social environments, how they connect to mind and emotions, how they acquire a “feel for the game” in a liturgical context. They would further want to discern carefully how spaces and dwellings work? How do they “learn” its inhabitants over time and thereby form a habitus?

If the liturgical arts function as a vehicle of God’s glory through creation, however, it is only because the triune God enables creation to be fit for such a task. The liturgical arts are capax Dei: capacitated by God to serve the praise of God on earth as it is in heaven.

I'm really looking forward to reading this full thesis of yours. Can I ask you a question about the section The liturgical arts as creaturely media?

What I'm reading I can't disagree with, for sure. It all sounds right and very familiar. What I do wonder, though, is there something that is not being said here? In other words, why the need to stress the liturgical arts as creaturely media? My assumption is that #1 this is meant to establish a grounds for liturgical art not being understood as idolatry. Correct?

But is there also a #2 implicit understanding in which a Calvinian mind would distance itself from understanding the liturgical arts as sacramental? If there is such a distinction being made can you please elaborate for me? I'm very interested.