My ordination to the diaconate 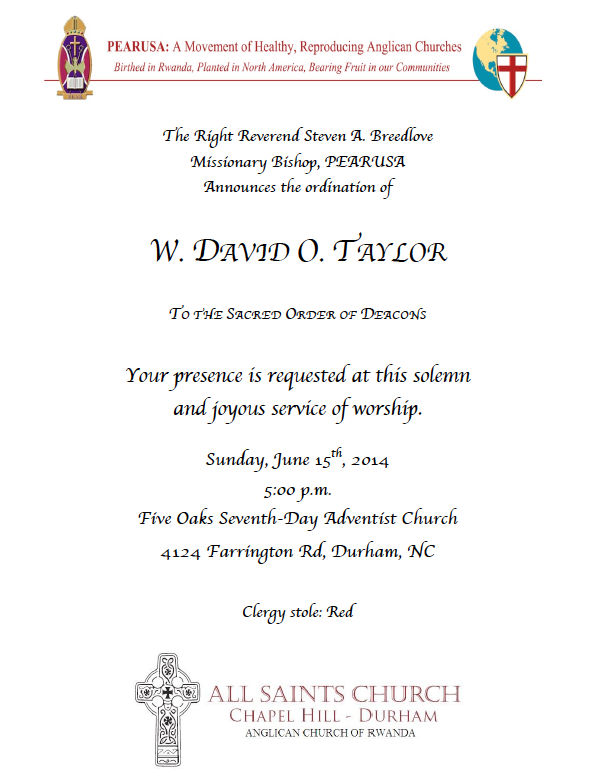 As I anticipate my ordination to the diaconate in PEAR-USA (Province de L’Eglise Anglicane au Rwanda), it is good for me to keep in mind the fundamental commitments of a pastor, in this case in particular, that of a servant (a diakonos). God-willing, I will be ordained as a deacon on June 15, 2014, here in Durham, North Carolina, in company of All Saints Church, our home church, and at some point in the near future, in Houston, Texas, most likely, to the priesthood.

I'm grateful to bishop Steve Breedlove who will ordain me, to Thomas Kortus who will be preaching, to Isaac Wardell who will be leading the musical worship, and to the many friends who have supported and prayed for us during this season of life. I'm especially grateful to my good wife, Phaedra Jean, for being willing to join me in this calling. Y'all are all welcome to come, of course.

Not sure what this says about me, but three out of four of the people included below belong to the seventeenth-century. Three are Anglican, one is Presbyterian.

Jeremy Taylor (1613-1667), “The Rule and Exercises of Holy Living.” (These are words which have haunted me since I first read them, nearly twenty years ago.)

“Do not constantly try to excuse all of your mistakes. If you have made a mistake, or an oversight, or an indiscretion, confess it plainly, for virtue scorns a lie for its cover. If you are not guilty (unless it be scandalous), do not be overly concerned to change everyone’s opinion about the matter. Learn to bear criticism patiently, knowing the harsh words of an enemy can be a greater motivation than the kind words of a friend.”

“Give God thanks for every weakness, fault, and imperfection you have. Accept it as a favor of God, an instrument to resist pride and nurse humility. Remember, if God has chosen to shrink your swelling pride, he has made it that much easier for you to enter in through the narrow way!”

Richard Baxter (1615-1691), The Reformed Pastor: A Pattern for Personal Growth and Ministry, “On Humility.” (What Baxter recommends here is something that has not always been easy for me to embrace. I should probably paste these words to the wall of my office and think on them daily.)

“Our work must also be conducted with great humility. We must conduct ourselves meekly before all. When we teach, we need also to be open to learn from any that can teach us. Thus we teach and learn at the same time. Do not let us proudly boast of our conceit, and disdain all who contradict us. Do not let us act as if we had reached the top and all the others had to sit at our feet.”

“Humility should teach us to learn willingly everything that we do not know. For if we would be wiser than all, then we must be willing to learn from all. For they who receive from all will become richer.”

George Herbert (1593-1633), The Country Parson: His Character, and Rule of Holy Life, “The Parson in Mirth.” (I love the seemingly odd-ballish quality of this advice. Had I read it in my twenties,  though, it would have saved me from a dreadfully serious disposition [ask my family!] that plagued me for an entire decade. Thank God for friends in my thirties who reminded me, time and time again, that a sense of humor was not inimical to good pastoral care. It's comforting to hear a seventeenth-century parson say it out loud and to give us permission to embrace "mirth" full-heartedly.)

“The Country Parson is generally sad, because he  knows nothing but the Cross of Christ, his mind  being defixed on it with those nails wherewith his Master  was: or if he have any leisure to look off from thence, he  meets continually with two most sad spectacles, Sin and  Misery; God dishonored every day, and man afflicted.  Nevertheless, he sometimes refresheth himself, as knowing that nature will not bear everlasting droopings, and that  pleasantness of disposition is a great key to do good; not  only because all men shun the company of perpetual  severity, but also for that when they are in company, instructions seasoned with pleasantness, both enter sooner,  and root deeper. Wherefore he condescends to human  frailties both in himself and others; and intermingles some  mirth in his discourses occasionally, according to the pulse  of the hearer.”

“The Gospel is bad news before it is good news. It is the news that man is a sinner, to use the old word, that he is evil in the imagination of his heart, that when he looks in the mirror all in a lather what he sees is at least eight parts chicken, phony, slob. That is the tragedy. But it is also the news that he is loved anyway, cherished, forgiven, bleeding to be sure, but also bled for. That is comedy. And yet, forgiven when the very mark and substance of his sin and of his slobbery is that he keeps turning down the love and forgiveness because he either doesn’t believe them or doesn’t want them or just doesn’t give a damn?”

“In answer, the news of the Gospel is that extraordinary things happen. Henry Ward Beecher cheats on his wife, his God, himself, but manages to keep on bringing the Gospel to life for people anyway, maybe even for himself. Lear goes berserk on a heath but comes out of it for a few brief hours every inch a king. Zaccheus climbs up a sycamore tree a crook and climbs down a saint. Paul sets out a hatchet man for the Pharisees and comes back a fool for Christ. It is impossible for anybody to leave behind the darkness of the world he carries on his back like a snail, but for God all things are possible. That is fairy tale. All together they are the truth.”