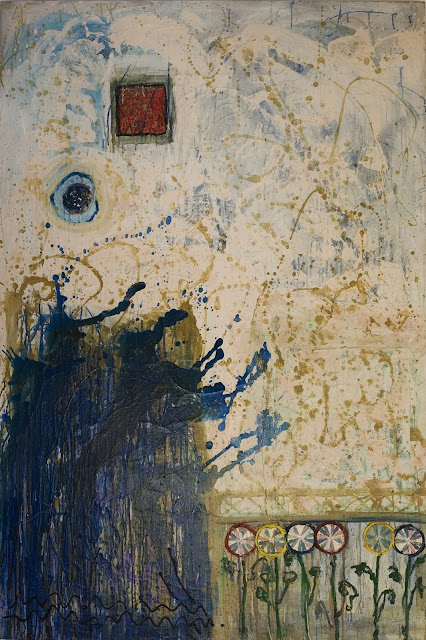 Last night I finished Daniel Keyes' science fiction novel Flowers for Algernon, winner of the Nebula Award for Best Novel in 1966, and then the following takes place early this morning at our neighborhood Kroger's.

I'm pushing my grocery cart, with Blythe inside, down the diapers aisle, headed to the organic milk section. At 8 AM on Labor Day, it is quiet inside. We're both in our pajamas, and Blythe is singing "Old MacDonald" on repeat cycle. As I begin to turn my cart out of the aisle, I suddenly hear a voice calling out to me from the opposite end of the aisle. The voice is frenetic. "Mister, mister! Excuse me! Mister!" Startled out of a mindless reverie, I turn around and see a Kroger staff hurtling towards me. Not walking. Hurtling. Or at least some sort of loping at high speed. Immediately I'm worried. Did I drop something? Did I steal something accidentally? My heart rate increases.

The young man stops a foot from my face, breathless, excited, and starts talking at me. I can't understand him. His voice is unusually loud, like the kind of loud that draws attention to itself. He is uncomfortably near my face. Blythe looks worried. "Excuse me, what did you say?" I ask. A torrent of words are pouring out of his mouth and I still can't understand what is happening, and I start to get self-conscious. He gesticulates towards my beard. "My beard?" I ask. What about my beard? Is there something wrong with my beard. No long beards permitted at Kroger's anymore? Did I drop beard hair in the produce bins? I'm so confused, and now I find that my body is standing between Blythe and this young man.

It's only as I watch him disappear around the corner that I realize I've just been talking to a "Charlie Gordon," the protagonist of Keyes' heart-rending story. I'm not sure what it's called, but it's something like a high functioning mental disability?

I'm feeling less dazed, as I move my cart past the cut-rate deals reaching out to me at the end of each aisle. Recalling my friend Nathan Sanford﻿'s younger sister, Sharon, who had displayed similar behavior when I knew her in high school, I feel a kind of happiness growing in me. It's spoiled by a slight sadness that I wasn't quicker to realize what was happening so I could actually engage the young man in conversation. There was something so dear, so un-self-consciously present, about his declaration (not sure how else to describe it). I guess he saw my beard from a distance and wanted to share his joy, or at least just tell me that he wishes he could have a big beard too.

I'm not even sure I've accurately described him, but while it was the last thing I expected to find at the grocery store this morning, I felt like it was a little gift. As awkward as I tend to get around folks with mental disabilities, even a little bit scared (I hate to admit it), I'm not sure how else to interpret the incident except as a gracious gift that made real-er the poignant fictional world of Flowers for Algernon, which the 86-year old author describes this way:

"Until he was thirty-two, Charlie Gordon--gentle, amiable, oddly engaging--had lived in a kind of

mental twilight. He knew knowledge was important and had learned to read and write after a fashion, but he also knew he wasn't nearly as bright as most of the people around him. There was even a white mouse named Algernon who outpaced Charlie in some ways. But a remarkable operation had been performed on Algernon, and now he was a genius among mice. Suppose Charlie underwent a similar operation...."

Suppose he too became a genius, tripling his IQ, amazing everyone around him but, at the same time, threatening all of his relationships, because his emotional IQ couldn't keep pace. Suppose also that Charlie eventually experiences the same regression that Algernon undergoes, after achieving peak intelligence, and reverts to his old self....

Unknown said…
This reminded me of "if I could take it away...
"http://www.redletterchristians.org/now-on-the-red-carpet-penny-and-amy-julia-becker/
11:04 AM

tamarahillmurphy.com said…
love this, David.
11:36 AM

w. david o. taylor said…
That's a sweet exchange with Penny and Amy Julia Becker. Thanks for passing it along.