The humility of a good teacher 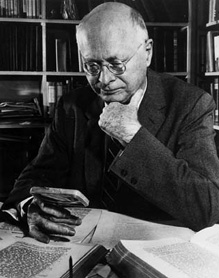 I've been reading through Eugene Peterson's memoir this morning, The Pastor. I fell upon a passage in which he describes an early encounter with the renowned biblical scholar William Albright. I'm not sure why exactly (though I guess I can surmise), the passage struck me in a poignant, melancholy way.

Perhaps it's the realization that I've encountered so few teachers like this, perhaps it's the certain fact that I want to be just this kind of teacher but am altogether aware of the temptation to be the exact opposite. Either way, it made me smile. I'm glad Eugene bothered to record the incident.

The centerpiece of the department [of Semitic studies at John Hopkins University], the world-famous William Foxwell Albright, had dominated the field of biblical archaeology and Semitic studies for thirty years. It was the first time I had been in the working presence of a world-class intellect.

It was not so much that his knowledge was so wide ranging and integrative, but that being with and around him I experienced his mind in action--he was constantly thinking, reformulating, pushing the boundaries of ancient history, noticing the ways the several Semitic languages worked comparatively.

He entered the classroom one morning telling us that he had awakened having solved the meaning of Moriah while he slept. Both the meaning and location of Mount Moriah, where Abraham had bound Isaac for sacrifice, had always eluded scholars. Professor Albright went to the chalkboard and soon had it filled with words from Ugaritic, Arabic, Assyrian, Aramaic, and, of course, Hebrew.

He continued, excited and intense, for twenty minutes, at which point Prescott Williams, an older student who had already spent four years with him, interrupted, "But Dr. Albright, what about this and this and this [he was making reference to items of grammar and etymology that I knew nothing about]. Do you think that holds up?"

The Professor stopped, stepped back, and stared at the chalkboard for twenty seconds. And then he said, "Mr. Williams is right--forget everything I have said."

Unknown said…
I had a similar experience when Dr. Calvin Seerveld stayed in our home for a weekend. Being in his presence was, well... I don't have the word for it. I too long to be this kind of teacher.
12:30 PM

Anonymous said…
I believe that one of the essential qualities of a teacher, maybe even the most important quality is a love of the subject and his desire to know more about the subject he is teaching. My college Mediaeval History professor possessed this quality. It was because of him that I turned into a history major. Thanks Roy.
7:59 PM

Daniel, that's great to know you encountered that in a teacher. Very lucky.
9:07 AM